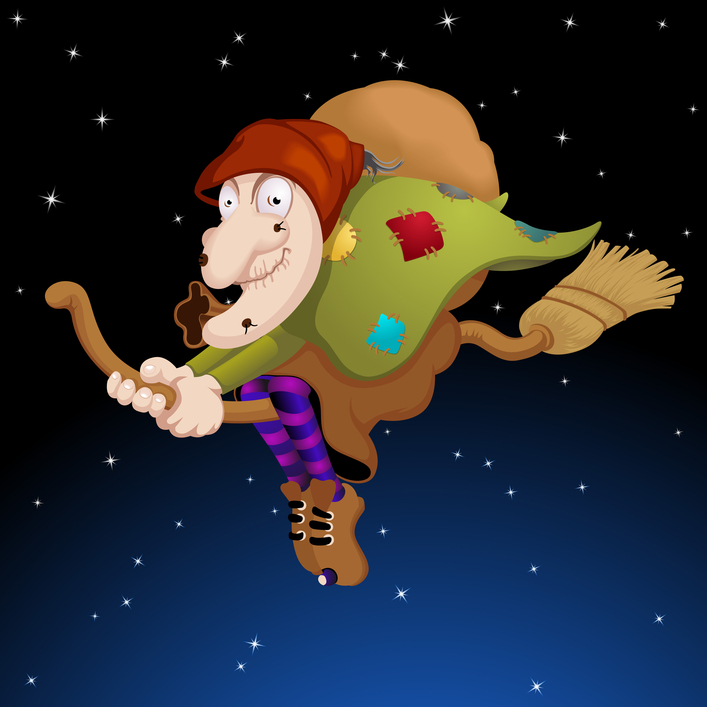 Yes, in Italy , we celebrate La Befana ( the Christmas witch) on the 6th of January, and it marks the end of Christmas festivities.

But in typical Italian style, it does so with a bang. Gifts are exchanged, little traditional markets trail off those, usually larger, prepared for Christmas, and we usually gather, once again, around gargantuan amounts of delicious food. If you are religious, this is the day you celebrate the coming of the Wise Men to Bethlehem and you place their statuettes –usually along with that of a camel– into your presepe. If you are a child, you can expect gift awaiting for you on the morning of the 6th. They may be in a stocking, or by the fireplace, but you can bet you’ll get them. That old loveable lady never fails to please her beloved kids.

Here comes one of my pindaric flights into childhood memories. You must be used to them by now. As a kid, la Befana would enter my thoughts pretty much straight after I unwrapped Gesù Bambino‘s gifts on the morning of the 25th. With a type of accuracy and organization I was not to keep as an adult, I would mentally go through all that I did not get that morning under the tree, and select the type of gifts la Befana was more likely to bring: yes, because you must know she is a poor lady, and cannot afford all the fancy stuff Gesù Bambino buys. Once this relatively complex process ended, I had to ask her for what I wanted. This usually happened around New Year’s and in a pretty simple way: I would go on my house balcony at night time and shout to the stars my gift list, and I can guarantee you she would never fail to make me happy and bring me pretty much all I fancied.

In my family, la Befana (Christmas witch)  always left her presents near the presepe. As my grandparents lived in an attic apartment above us (the same apartment where I happily stay every time I go home now), we would end up having two presepi under the same roof and she had the habit to leave her presents at my grandparents’: the candy and everything small enough to fit was left inside a stocking, all the rest was nicely placed around the presepe, ready to be unwrapped and enjoyed. She would usually bring me books, colored pencils, perfumes and little toys, although one year I remember she made me very, very happy with one of those “Fashion Wheels” that used to be en vogue in the mid-80s, and you could create all those drawings of clothes with. She would bring oranges, dried figs, dates and peanuts. Candy was, however, her pièce de résistence, and it was not regular candy, but all the stuff you were less likely to get during the rest of the year: chocolate cigarettes and chewing gums (always banana flavor), sugar coal (in black, pink and white), torroncini and cri-cri, typical candies of Piedmont, consisting in a whole hazelnut surrounded by hazelnut chocolate and then covered in sugar sprinkles, always wrapped in shiny, colorful paper. What a feast, I would have for the following days!

One thing I never wondered about when I was a child was where the Befana came from. I just believed what I was told, that is, that she was a good witch that helped Gesù Bambino by delivering some of His gifts, especially the smaller ones: you know, it is not easy to carry large stuff on a broomstick. Just like me, the majority of Italian children would not ask about her origins or her whereabouts during the rest of the year.

It came as a bit of surprise, years and years later, to find out that the old lady on a broomstick had very ancient origins indeed, and that she may be the vestige of a much older cult than that of the Befana itself…

The figure of “la Befana” as we know it may have origins way older than those of the festivity, the Epifania, we usually associate her with. Her roots, it seems, have to be sought in pre-Christian times, and developped well into a tradition made of folklore and religious elements. It was the Celts, once inhabiting the Northern regions of our country, who introduced the figure of a female representation of nature to be celebrated in the middle of Winter. Nature, tired and empty at this very time of the year, needs rest before being rejuvenated once again and bring food and sustainment to the world with the coming of spring. She comes, then, in the shape and habits of an old lady, to leave Mankind gifts of food and seeds, for their living during the months she is to rest.

From this Celtic representation of a tired, yet thoughtful and bound-to-be-born-again Mother Nature, La Befana has taken her shape and main appearance, which is, today, that of an old lady with a hunch, a big nose and a pointy chin, poorly dressed and perennially covered in sooth, as she gets into our homes through the chimney. Legends say that, on the night between the 5th and the 6th she flies above our roofs on her broomstick and, once we are all fast asleep, she gets into our homes through the chimney and leaves presents and candy into stockings. Good children will receive lovely gifts, whereas naughty ones will get only coal.

Something that many of us do not know, is that the figure of the Befana is not only typical of Italy, but is in fact found in many a culture, from Normandy to Persia, from Russia to Northern Africa. In all cases, she is a generous and benevolent figure, very likely to be associated to pre-Christian cults of the Mother Goddess, guardian of the hearth and the home: if so interpreted, it comes as no surprise that the Befana reaches our homes through the chimney, a symbol itself of the connection between the earth (and, specifically, the hearth) and the skies.

To the majority of us, however, la Befana is that of our own Italian tradition, a Befana that took shape and habits from old country stories passed on to us by our grandparents.

She would fill our stockings with dried fruits, nuts, chestnuts and small oranges, or coal, if we had been particularly naughty. Never one to be evil, though, the Befana‘s coal was always of the sweet, edible kind. Once upon a time, actually, the coal was real, and it was then used to roast the chestnuts left in the same stocking.

The Epifania or “la festa della Befana” in Italy

I am sure there is some among you readers who has majored in English at University. If so, you may be familiar with the term “epiphany” and, in fact, you may still have nightmares about “Stephen Dedalus’ epiphany on the Malahide beach” in Joyce’s Portrait of the Artist as a Young Man: I certainly still do… Anyway, if you are familiar with that, you may remember that the term epiphany comes from the Greek Epiphàneia and means, alas, revelation or illumination. It refers to the first human and godly manifestation of Jesus Christ to the Three Wise Kings, ten days after His birth, on the 6th of January. However, just as for the Befana herself, its celebration is rooted well into pre-Christian times: in fact, a similar feast was celebrate in Rome before the advent of Christianity itself.

At the very end of December, very much when we celebrate our Christmas today, the Romans would celebrate the Saturnalia, in honor of Saturn, the father of Jupiter hence creating power of all. In later times, the Saturnalia became also associated with the cult of the Sol Invictus and that, more in general, of the creating force of the Sun. After the generating gods, the Romans would celebrate, at the beginning of January, the domestic ones, the lari, protectors of the family and of its well being. The period in which we, today, celebrate the Epifania corresponds to that in which the Romans used to honor the Lari.

The beginning of January was a spiritually relevant time also in the East, where it was strictly related to the figure of Jesus. The Epiphàneia was instituted in 120 AD to remember the christening of Christ in the waters of the river Jordan, at the hand of John the Baptist. Very likely, the festivity fell in this particular period of the year because some early Christians sects believed the actual incarnation of the Word took place through the Christ christening and not at His birth. If the festival was, at least initially, celebrated only by some, it soon was adopted officially by the eastern Church and it came to simbolize four essential moments of the life of Jesus: His birth, the coming of the Wise Men, His christening and the Caana miracle. In all four occasions it is an epiphàneia to be celebrated, a “manifestation”: that of the divine in the person of Jesus Christ.

The Epifania in the Western Church

The celebration of the Epiphàneia soon got popular in the West. The cult and celebration of the Sol Invictus, which used to conclude the Saturnalia, was extremely felt by people and, just as it happened for other festivals, it was absorbed within the practices of Christianity and transformed in an orthodox moment of worship; the Sol Invictus of the Romans, the god of life and light dispensed to all existence was transformed into the figure of Christ, who brought, according to the Church, the light of true spirituality and knowledge to Mankind. This association between the Christ and the Sun is often found in early Christian iconography, where Christ is portrayed with sunbeams surrounding His head and His body.

In the fourth century, the West attributed to the day of the Epifania another meaning, always of revelation, to add to those already highlighted by the Eastern Church. It became a symbol of the revelation of Jesus, hence of Christianity, to the world of paganism.

Certainly, there is much history, both factual and spiritual, behind the day of the Epiphany, and it is almost a pity so many of us who celebrate it ignore or forget the doctrinal relevance of the day. The figure of la Befana / Christmas witch, became its principal symbol, a figure of pagan origins, embodying a Christian feast, whose celebration became particularly relevant in popular tradition. Once again, as it often happens in Italy, history, religion and people’s habits mingle with one another and create that outstanding jewel that Italian culture is. The actual complexity of a feast such as the Epifania, apparently so simple in its development, is sign of the wealth of the country’s cultural heritage, a heritage we Italians often forget or, even worse, disregard.

you should put symbols associated with the holiday

I remember the Epiphany back in my country, Italy, when my brother and I would receive gifts from the local police station where our father worked when we were children.