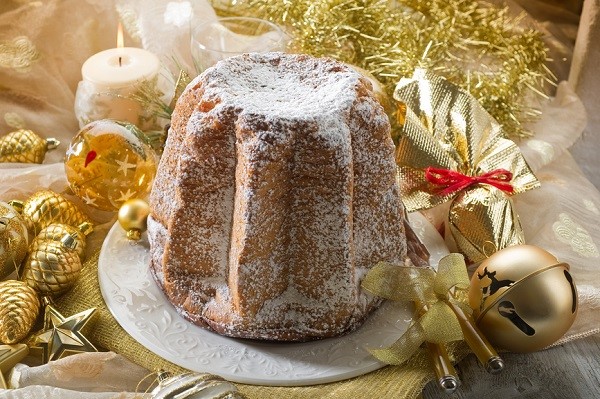 Christmas is just around the corner and, where Italians are concerned, food is one of the main components in the festivities.

There are many traditional products eaten by Italians during the Christmas season, and two of the most famous are the pandoro and the panettone.

Pandoro is a traditional Christmas cake made with flour, butter and eggs, which was originally produced in Verona. Verona is not only the town where the first pandoro was made, but remains the place most associated with this delicious creation.

It is important to note, however, that the origins of the pandoro are often linked to the skills of Austrian pastry chefs, inventors of the bread of Vienna, from which inspiration was sought to produce the first pandoro.

Pandoro is also associated to a famous cake typically linked to wealthy families of the Venice Republic during the Renaissance. This cake, the “pan de oro“, or “bread of gold,” was covered in thin, gold leaves.

Pandoro as we know it today was also most certainly inspired by a star-shaped cake known as the “nadalin,” which was prepared by some families in Verona in the 1800s. In fact, pandoro even keeps the star shape of the “nadalin” alive.

The name pandoro, meaning golden bread, perfectly describes its colour, which is provided by the eggs in its batter and its sugary coating. The shape, as previously explained, resembles a star.

The pandoro is often warmed and served with cream, hot chocolate or Nutella poured on horizontally cut slices, thus enhancing the similiraties with an eight-pointed star.

Since the 19th century, pandoro has been produced on an industrial scale and it has now acquired national fame, being sold in all Italian supermarkets. Next to industrial production, there is also a parallel handmade production, which in the last few years has increased its sales by 20%.

If pandoro is traditionally linked to Verona, panettone belongs to the history of Lombardia, in particular to that of the city of Milan.

In the 13th century, an ancestor of panettone already existed: it was made of bread, yeast, honey, raisins and pumpkin. Starting from the 1800s, it acquired the shape of today’s panettone. It is a cake made from flour, butter, eggs and sugar with candied citron and sultanas.

Several legends exists about the birth of panettone. Some people mention the story of Ughetto degli Atellani, a boy who fell in love with a girl, Adalgisa. In order to be near Adalgisa, Ughetto pretended to be a pastry chef, so that he could work in Adalgisa’s family bakery. While there, the lovestruck young man tried to invent a new cake by mixing flour, eggs, butter, sugar and sultanas. Ughetto’s creation was a smash hit, earning him favor with Adalgisa’s father and paving the way for the two to be married.

Another widespread legend is based on the story of a cook working for Ludovico il Moro, who had to prepare Christmas lunch. After baking the cake, the cook forgot it in the oven and it burned; a boy named Toni, a kitchen porter working with the cook, suggested a solution: cooking another cake with the leftover ingredients, which were flour, butter, eggs, citron peel and raisins.

When the cake was served, everybody liked it and the duke wanted to know the name of the cake, which was called “pan del Toni“, Toni’s bread, which then evolved into the name panettone.

Panettone has a less romantic shape than pandoro because it has a cylindrical base, and ends with the shape of a dome. Even if its shape may not be as evocative of Christmas festivities, Italians adore it, and comsume huge quantities of panettone during the Christmas period.

Both pandoro and panettone sell like, well, hotcakes during Christmastime. At the same time, Italians take their choice of panettone or pandoro very seriously. Some love pandoro, but dislike panettone, while some others are the complete opposite. Usually children prefer pandoro and those who don’t like raisins and sultanas will never choose panettone.

One thing is for sure, those who like both of them will get the better of it, because they’ll get to taste a slice of both!

If you ever come to Italy during the Christmas period you can’t refuse to try them…so choose whichever is the best for you and try it in the pursuit of the perfect Italian Christmas!

In the US you can find pandoro in basically all Italian stores and online, and you can find panettone (at least here on the East Coast) at just about any supermarket. Some panettone brands are made in South America instead of Italy, but are equally good.