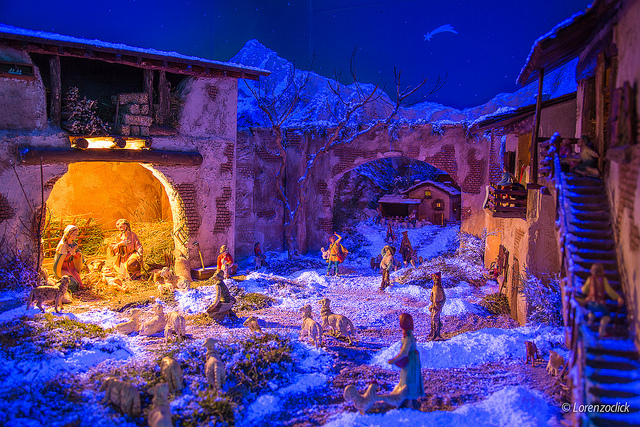 “T piac o’ presep” were famous words uttered by Neapolitan Eduardo DeFilippo, an Italian actor and director, in the drama “Natale in casa Cupiello“. In English they mean, “Do you like the Holy Nativity?” The presepe, or Holy Nativity, was central to the development of the plot, as one of the play’s main characters aimed at creating a perfect one for Christmas.

The play is just one example of the importance of the presepe in Italian Christmas celebrations: the presepe is, indeed, one of the most traditional symbols of the season, its history rooted deeply in that of Italian culture. Its creation is a ritual so entrenched  in people’s habits that many can’t renounce to it, even in today’s day and age, when celebrations have become more modern.

Basically, a presepe is a scene of the stable where Jesus was born, complete with figurines to represent Mary, Joseph, Jesus and the Wise Men (to be added on the 6th of January), shepherds and animals. Depending on the size, the scene may include buildings for an entire village. Whether big or small, if you’re in Italy during Christmas time, you’ll always find a presepe somewhere.

The country is so attached to this tradition, sometimes it even manages to argue about its name: debates about the correct word to use, presepe or presepio, have been going on  since it can be remembered. Truth is, both forms are correct because they come from Latin, which accepted both praesepium and praesepe, although presepe is probably the most used today.

The term mangiatoia (literally manger, but most commonly known in English as crib, when referring to the Nativity) is used for a three-dimensional representation of the nativity, usually placed in a hut or stable, with figures which can be moved around to the choice of the creator. In this version, the mangiatoia remains the protagonist of the scene and the figures of Saint Joseph, the Virgin Mary and Baby Jesus are placed in it together with that of the ox and the donkey in the stable.

While some may see the presepe simply as a tradition, it is actually very close to a fully developed form of art. Proof of its importance in Italy can be seen in the numerous markets and exhibitions set up for it, some coming alive with real people impersonating the main characters of the scene. The most famous of these markets is that of San Gregorio Armeno in Naples. San Gregorio Armeno is a city centre street, where several craftsmen exhibit and sell their creations. Famous worldwide, you’ll find a special and magical atmosphere during Christmas. The market is a well known touristic attraction, visited every year by many seeking to experience the enchating atmosphere of a true Neapolitan Christmas. 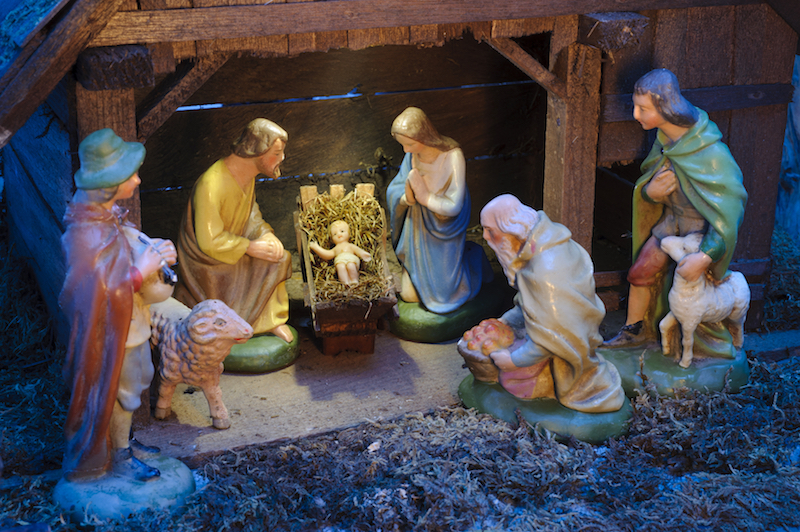 If you make it to the market this year (as every year in fact!), you’ll be surprised to find some very peculiar characters to add to your presepe statuettes’ collection: apart from classic figures like il pastore (the shepherd), il contadino (the farmer), il macellaio (the butcher), and il bottegaio (the storekeeper), you’ll get to see figurines of celebrities or political leaders. The shepherd stands beside President Obama, a storekeeper sits cheek to cheek with the Queen of England: all of it is possible on the stalls of this amazing market. Look for Napoli F.C. players, as well as VIPs and actors, especially if they’ve been at the centre of some scandal during the year.

Some presepi are quite expensive, but the simple ones are reasonably priced and will set you back of about 35 euros ($ 40).

Traditionally Italians take out their presepe from its boxes on December 8th. Some people start to build it on that day, others just modify an existing set and others still simply spray a bit of artificial snow and musk for decoration. No matter the size and the ornaments choosen, you’ll find a presepe in the home of almost all Italian Catholics. And be prepared, as you’ll probably be asked, “Ti piace il presepe?”

Hi,
I want to suggest my website: http://www.artigianatopresepiale.com. It sells only handmade presepi from Napoli. All products are made by italian craftsmans.

I have seen this tradition and adopted it. My neighbors who are varied all get a chuckle out of the figures and their placement. The children like looking for the little man squatting in an out of the way place, and when fountains throw water , etc magic is created. If we remember that we are all equal before our maker then I see only good coming from the creche. Jesus was born in humble circumstances, and we need to remind everyone of this.

Please do not ever abolish the presepi in the name of diversity. It is a beautiful tradition, a joy to children, and integral as stated to Italian culture. Indeed, many businesses rely on the annual creating of a presepi. Tourists are fascinated. I occur 100% with your summation. I make a huge, elaborate, presepi taking up 1/2 of my foyer each year and it is anticipated throughout the year.