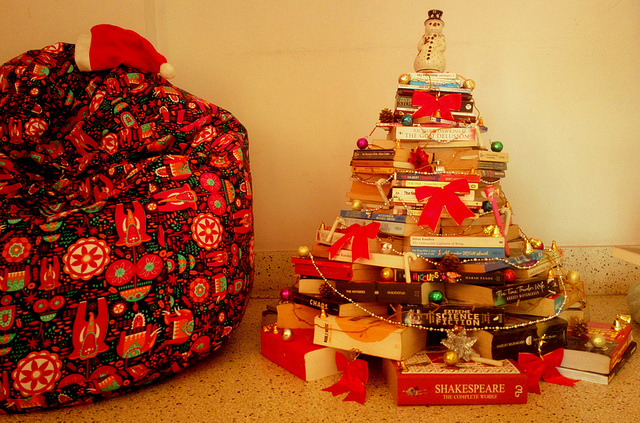 I’m a desperate bibliophile and everybody knows books make always a perfect present for me: I can’t have enough and I read them all. What’s not to love, in receiving a book? The shining beauty of a fresh cover, the comforting smell of paper and the promise of hours and hours spent far from everyday’s worries and stress. All topped with the fact that, nevermind what you choose, a book always teaches you something, even when they’re bad: if anything, they show you how not to write…

For Christmas, Lifeinitaly has already suggested its readers interesting made in Italy Christmas ideas, now we’d like to focus on the written word a bit more and give you some ideas about beautiful books to offer to friends and family this festive season. Most of them are, of course, translated into English, but a couple are in Italian, for those among you who know the language or are learning it and may like a bit of a reading challenge.

Give an Italian book this Christmas, maybe with the promise of a good caffé and slice of panettone in a few weeks time, to discuss it once it’s read: it may well be the best Christmas present you’ve even made!

Carlo Lucarelli is a well known and well respected journalist and author, specialized in mysteries and crime. His extremely popular tv show, “Blu Notte” became a cult at the end of the 1990s and went on for the good part of a decade. Most of his tv fans, however, ignore he’s also a talented “giallista”, that is, a crime writer.

Almost Blue is the story of a young visually impaired man with a penchant for listening to what he shouldn’t with his radio scanner. Suddenly, he finds himself at the centre of an incredibly gruesome series of events and murders, investigated by the police of Bologna. A serial killer with serious psychological issues is out there and it seems it’s too late to stop him.

Almost Blue is available in English translation and can be purchased on Amazon.

Giorgio Faletti was truly a multi faceted artist: he started off as a comedian in the 1980s, then became a popular singer and songwriter in the 90s. However, everyone was surprised when, in 2002, he published a crime novel, I Kill, which became immediately a hit, with 4 million copies sold in Italy and 27 editions published around the world. It is set in the wealthy, yet uneventful Principate of Monaco, where a famous Formula One driver and his popular girlfriend are killed and horribly mutilated. That’s only the beginning of a series of cruel murders of which, it will become clear to the two investigators, FBI’s Frank Ottobre and Sûreté Publique’s Nicola Hulot, the murderer may be only one of the culprits.

I Kill is avaible in English and can be purchased on Amazon.

Written by judge Giancarlo De Cataldo, Romanzo Criminale is inspired by the true story of the Banda della Magliana, which operated in Rome in the 1970s and the 1980s. The main characters act against an actual historical background, upon which their life stories develop. The book became so popular that a movie and a tv series of great success where inspired by it.

Romanzo Criminale is available in English and can be purchased on Amazon.

It took three years to Elsa Morante to complete La Storia (History: a Novel)  one of her most controversial, yet popular works. Set in Rome during the Second World War and the early years of the post war period,  La Storia follows the life of Ida Raimundo, a partly Jewish teacher, and her two sons. While following Ida’s life, Morante recounts the tragedy and the horrors of the war, as endured by different characters, in different moments of the conflict. A beautifully touching story, where the author’s memories about the war support an intricate plot, through which the reader is forced to face the chilling reality of those years.

La Storia is available in English (History: a Novel) and can be purchased on Amazon.

This is a fascinating book, the biography of Elena Lucrezia Cornaro Piscopia, born 1646 in Venice, the first woman to get a degree in history. Elena Lucrezia was the daughter of a rich venetian nobleman who always encouraged her to pursue an education. At the age of 19 she became a benedectine oblate and continued studying theology, Greek, Latin and philosophy. Carrano’s book follows the difficult path this woman, enamoured with knowledge, had to take to be accepted by the intellectuals of the time, and to eventually be granted the possibility to obtain her degree in Padua.

A beautiful, fascinating read, with the opulence of early baroque Venice playing in the background.

Illuminata: la Storia di Elena Lucrezia Cornaro is not available in English, but can be purchased in Italian on Amazon.

One can’t really go wrong with Umberto Eco, especially when it comes to historical novels. The Prague Cemetery has been widely described as Eco’s best novel since The Name of the Rose and, just like that best seller, it wisely mixes history with fiction. Set in Turin, Paris and, of course, Prague, the novel investigates the murky underbelly of 19th century Europe, among conspiracies, battles between Freemansons and Jesuits, references to the Paris Commune, the Dreyfus Affair and echoes of The Protocols of the Elders of Zion. Its protagonist, fictional Simone Simonini finds himself involved in relevant historical events of the time and meets several important people of his times, including Alexandre Dumas, Nino Bixio and Ippolito Nievo: there’s enough mystery and history in this novel to keep entertained historians and thrill seekers alike.

Il Cimitero di Praga (The Prague Cemetery) is available in English and can be purchased on Amazon.

Books for lovers of the magical

This is an amazing book for lovers of literature and folklore, penned by one of the most talented of Italy’s contemporary writers, Italo Calvino. Italian Folktales, as it goes in English, is a beautiful collection of 200 folktales from all over the country, retold through Calvino’s visionary creative verve. This volume is a little jewel of literature and tradition, a beautiful Christmas present for all lovers of Italy and all things Italian.

Fiabe Italiane (Italian Folktales) is available in English and can be purchased on Amazon.

This is a new volume of short stories all written with Christmas in mind by some of Italy’s most famous writers: Andrea Camilleri, Giosué Calaciura and Francesco Cataluccio are only few of the authors who put their creativity at work to recreate the unique atmosphere of this time of the year. Expect to fly with your imagination, but not necessarily to read through 200 pages of feel-good narrations: creativity, sometimes, can bring you to some pretty dark places…

Storie di Natale is available only in Italian  and can be purchased on Amazon.

In truth, this is a theatre monologue, which you may be familiar with because it became also a movie a couple of years after its publication. It reads beautifully, though, unlikely other theatre pièces that need to be watched, rather than read. It’s the story of Danny Boodman T.D. Lemon Novecento, who was abandoned as a newborn on the piano of the Virginian, a transatlantic travelling between Europe and the US. Novecento, honoring the place of his birth, becomes a talented pianist, without ever leaving his ship…

Poetic and amazingly written, this is a short book, to be read in an evening, while it snows outside.

Novecento is available in English (The Legend of 1900) and can be purchased on Amazon.

A cheerful, entertaining book about Gian Burrasca, an Italian Bart Simpson from the beginning of the 20th century: if you like period literature and good, old fashioned humorism, this book is for you. Expect quid pro quos, jokes and a lot of entertainment all delivered in a delightfully light prose. It’s a great book for children, too. Although you wouldn’t want your kids taking inspiration from good old Giovannino Stoppani. A curiosity, Vamba (real name Luigi Bertelli) was inspired by an American book, A Bad Boy’s Diary, published in 1880 by Metta Victoria Fuller Victor.

Il Giornalino di Gian Burrasca is available in English with the same title on Amazon.