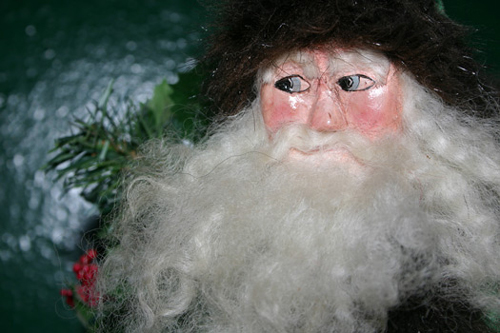 Mistletoe is a plant with an influential Christmas reputation that has antique beliefs attached to it. It is a plant common in Europe and in North America and is considered a symbol of love.

It is the most legendary of plants.

Some used to call mistletoe an “all heal” plant and thought there was no illness it could not cure. However, mistletoe is, in fact, poisonous, particularly the berries. European customs regarding mistletoe (its scientific name is viscum album) were passed down during immigration to North Americans. It is considered an amulet and a good luck charm, and it is sold everywhere as a Christmas token.

Kissing under the mistletoe  is a favored Christmas tradition.

In Europe, mistletoe branches were placed over house and stable doors to prevent the entrance of witches.

Mistletoe was held in great reverence in Europe by the Druids. At the start of the new year, and at a particular age of the moon, the mistletoe was cut. Dressed in white robes, Druids would go in search of this sacred plant, one climbing the tree to gather it, separating it from the oak with his golden knife. If, by chance, the mistletoe fell to the ground, it was considered an omen and a great misfortune was to be expected.

For the Druids, mistletoe was a protector from all evil. It was believed, too, to be a fertility enhancer and aphrodisiac: however, you may prefer staying away from it for these purposes: as we said, mistletoe is poisonous, and large quantities can be lethal!

Mistletoe is present in Classical literature as well: Virgil writes about it in the sixth book of the Aeneid, where he narrates Aeneas’ discent to Hades. The sibyl of Cumae, Virgil says, had ordered Aeneas to find a golden bough, which would have placated the Gods: according to anthropological research, it appears that such branch was, indeed, mistletoe.

If you are interested in this particular story, you may like to check out James Frazer’s work: he dedicated his anthropological career to this!

And how should we behave while kissing under the mistletoe? Well, the boy should pick a berry and kiss the girl. He should then keep on picking berries from the mistletoe branch until there is none left, at which point –and only then!– kissing should stop!

Butcher’s broom is a plant with sharp pointy leaves like the holly (agrifoglio in Italian, Ilex aquifolium – scientific name). Butcher’s broom also has red berries, just like the holly, but they have a different, more oblong shape. The plant bares tiny greenish flowers. In Italy, butcher’s broom often takes the place of holly for Christmas decorations, since holly has been declared a protected plant and is now illegal to pick.

Why the name “butcher’s broom?” Because its branches were used to clean butchers’ blocks in English butcheries. In Italy, it is comically called pungitopo (its scientific name is ruscus aculeatus), which translate as “Prick the Mouse.” The name probes an interesting story indeed. In the past, pungitopo branches were used to save hanging meats, cheeses and salumi from being nibbled by mice. Italian farmers used to gather butcher’s broom for its poker sharp ends, and would use it to scare mice away!

Bunches of it were tied as bouquets, and several were placed around aging foods in cellars and grottos. The sharp edges of the leaves were enough to prick any mouse’s nose and make it scurry away!

Butcher’s broom’s young sprouts were eaten in the place of asparagus, and its seeds were toasted and prepared to replace coffee.

Butcher’s broom was also known among ancient Romans, when its leaves and berries were mashed and added into wine, and were also often used to make a  popular wine based decoction.

Holly was also popular among the Romans, who celebrated the god Saturn with it from the 17th to the 23rd of December. Saturn was the god of agriculture and harvest and was honored in a week long series of celebrations which very much resemble those we have today for Christmas. Romans brought branches of holly into their homes or planted it nearby, as they, too, believed that holly had the capability to ward off evil spirits.

More on Mistletoe: its Name, its Varieties

The Word ‘mistletoe’ is of uncertain etymology: the English name is said to derive from the Anglo – Saxon misteltan, tan signifying ‘twig’, and mistel from ‘mist’, which in old Dutch meant ‘birdlime.’ Thus, mistletoe means ‘birdlime twig,’ reference to the fact that the berries have been used for making birdlime. Mistletoe berries were excreted in bird droppings and stuck to twigs.

Birds, moreover, would grip the fruit in their bill, squeezing the sticky, coated seed out to the side, and then wipe their bill clean on a branch: this explains why mistletoe sprouts in trees. Dense clumps would grow well in these trees, attaching themselves on tightly, burrowing down into the trees bark. They make excellent clumps for birds to make their nests and are favored by species such as spotted owl and painted honey eaters.

At its natural state, mistletoe is, in fact, a type of parasitic plant. The “Dwarf Mistletoe,” for instance, belongs to the santalaceae family, and relies on its host for nutrients and photosynthesis. It grows on almost any deciduous tree, preferring those with soft bark, and perhaps being commonest on old apple trees.

Mistletoe is a true parasite, for at no period does it derive nourishment from the soil.

European mistletoe bares robust and beautiful globular white berries that ripen in the Winter and, being an evergreen, has leaves that remain green throughout the colder months. The berries contains one or two seeds each. The plant’s flowers are tiny and yellow, arranged in threes. If they are female, they turn into round shiny berries, that remain luscious until March.

It would not be surprising if there was some confusion between these three plants, as they are all common around Christmas time, and, with the exception of mistletoe, which has different leaves and berries, look very much alike.

Mistletoe has a long track record for its mystical uses, and was introduced as a fertility enhancer, thus “the kiss under the mistletoe we know today.” With their red berries and their beautiful green leaves, butcher’s broom and holly are highly decorative and they are both used during Christmas celebrations, in a manner similar to that favored by the Romans, hundreds and hundreds of years ago.