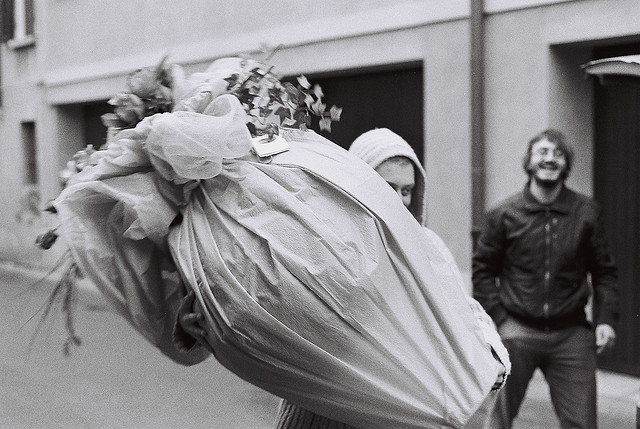 To some, it may be hard to understand how important Easter is for Italians and grasp the full magnitude of the celebrations of Easter in Italy. It may not be very big in the USA, but in Italy it is the second most important religious holiday after Christmas. From a strictly religious point of view, it is even more important: in fact Easter, the feast dedicated to the resurrection of Christ, is the celebration of the mystery that is at the very root of Christian Faith. Easter for Italians has the same importance of Thanksgiving for Americans.

History and tradition of Easter in Italy

When did we start celebrating Easter?

The religious celebration of Easter in Italy is strictly attached to other traditional and religious events, namely Carnevale and, of course, Lent. Carnevale officially starts in January and lasts up until Ash Wednesday (the first day of Lent), the last three days before Lent being especially festive. Carnevale is best known to Americans as Mardi Gras, which are based upon the celebration of Shrove or “Fat” Tuesday (Martedì Grasso).

Many are probably aware that, during Lent, Catholics give up meat, at least on Fridays. Older church doctrine, however, decreed that Catholics had to give up more than meat for Lent: eggs, milk, and even fats were restricted for the observant. For this reason, the last day before the beginning of Lent became “grasso”, fat, as people would not only feast one last time before a long period of abstinence, but also try to consume all foodstuff and ingredients which were to be banned for the ensuing 40 days. From this, the association of rich desserts and foods eaten on Martedì Grasso, such as frittelle and bugie in Italy or pancakes in the US.

Lent (Quaresima) marks the forty days of fast and abstinence before Easter, symbol of the 40 days spent by Christ in the desert before His death on the cross.

Important traditional and liturgical moments happen during Lent: the Feast of St. Joseph (Festa di San Giuseppe) on March, 19th, which is also, for we Italians, Father’s Day. Palm Sunday (La Domenica della Palme), when Catholics celebrate Jesus’ arrival in Jerusalem, a week before his Resurrection, in occasion of the Jewish celebration of Passover. Catholic tradition wants palm leaves and olive branches to be blessed during a large ceremony, then distributed to the faithful. Many churches still follow the tradition of having the priest knock three times from the outside of the closed church doors to symbolize Jesus’ entry in to Jerusalem.

In Italy, the tradition wanting the parish priest to bless each and every home of his parish is still fairly common, and usually takes place during Lent and Easter time.

Holy Week starts the day after Palm Sunday and ends on Easter day; the main celebrations leading to Easter Sunday take place during the Easter Triduum (triduum comes from the Latin triduum-ui and means “of a three-days lenght”), on Holy Thursday, Friday and Saturday. All of these celebrations are typical of  Easter in Italy.

Holy Friday is the day when the death of Christ on the cross is remembered. In Catholic countries like Italy, a solemn mass is held at three in the afternoon (traditionally considered Christ’s time of death), where the Passion of Christ is celebrated. Typical is the reenactment of the Via Crucis. The one held in Rome by the Pope is always shown on national tv in Italy.

If you happen to be in Italy on Holy Friday, you’ll hear church bells ringing at three o’clock, to mark the moment and as a reminder for all of the beginning of the mass.

On Easter Sunday, full celebrations are on: many towns and villages have traditional exhibitions and commemorations held to honor the religious feast. Everywhere, of course, solemn mass is held.

Easter Sunday, for instance, begins with a bang in Florence – quite literally! The three hundred year old traditional explosion of the cart (Scoppio del Carro) has its roots in the pagan ritual of ensuring a good harvest, and is now considered a bringer of good luck for the city of Florence.

Easter Monday, also known as Little Easter (Pasquetta) is also an official Italian holiday that is often spent enjoying the fresh Spring weather with family and friends in picnics. The Racing Of The Egg (Palio dell’Uovo) is a traditional Easter Monday game in the town of Tredozio. And in Barano d’Ischia, a traditional dance called the Festa della Ndrezzata takes place on the same day.

Traditional Easter meals vary from region to region, but eggs and roasted lamb are common elements everywhere. Eggs represent life, fertility and renewal, all of which are essential symbols of Easter. Dyed eggs grace many Easter tables, and eggs are often found in soups and in a traditional Easter pie (Torta Pasqualina). Roasted lamb, as a symbol of birth and the Shepard, is a traditional main course for Easter in Italy.

Chocolate bunnies are not common, but beautifully decorated chocolate eggs are a traditional Italian Easter treat and gift! Chocolate eggs are a symbol of Easter even for non religious people. Everybody gets an egg for their dear ones. Most chocolate eggs are industry produced, however, every serious cake shop and bakery produces finely hand made eggs, using the best chocolate available. Inside each egg is hidden a small gift. Or not so small, depending on how luxury the egg is!

It is also possible to request a custom made egg, selecting in advance the gift it will contain. Many engagements began in Easter, with an engagement ring hidden in an egg.