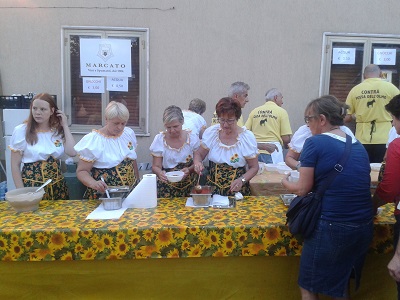 In Terrossa, a small village in the province of Verona, since immemorial time every 4th week-end of July takes place a festival to celebrate and pay homage to what was once the main assistant to the farmer, the donkey.

When the donkey was replaced by tractors at the beginning of the 1970s, the festival was suspended, until 1997 when a group of friends of the village of Terrossa decided to bring back the old celebration and to reinvent it into a real race with a prize, a “palio”. Every “contrada” has a donkey and a jockey, and the rivalry between them is really strong.

The race is actually hilarious because the donkeys don’t always obey to their jockey, sometimes the jockey has to get off and pull the donkey, other times he just gives up.

The palio, called “Palio dei mussi” is usually on Sunday afternoon. And, as it often happens in Italy, the race is an excuse to organize a big festival with food and wine.

The previous Saturday there’s a really successful food night: along the road that takes up to the hill, every “contrada” parks its cart and offers traditional food:

– polenta with salami, mushrooms and parmesan cheese on top

– “pamoio” (a soup made with bread and water, traditional typical breakfast of the farmers during harvesting)

– tongue with “pearà” (a traditional sauce made with bread, lot of pepper, marrow, butter and broth)

– gnocchi with ragù (minced meat sauce) or butter sauce, with a topping of sugar and cinnamon

– polenta and baccalà (salted codfish cooked in a traditional way)

How to get to Terrossa:

By car (by public transport is too complicated and long): if you travel on the motorway E70 or the road SR11 between Verona and Vicenza, exit at Montebello and follow the signs to Roncà and Gambellara. Terrossa is very close to Gambellara.

The festival is very popular because of its recalling the traditions of the area and the festive mood that permeates it. And with 2 or 3 euro you get the pot and as much wine (locally produced) as you can take, so maybe this is also a good reason for the popularity of the “Palio dei mussi“.

Other traditional events taking place in Italy at the link.