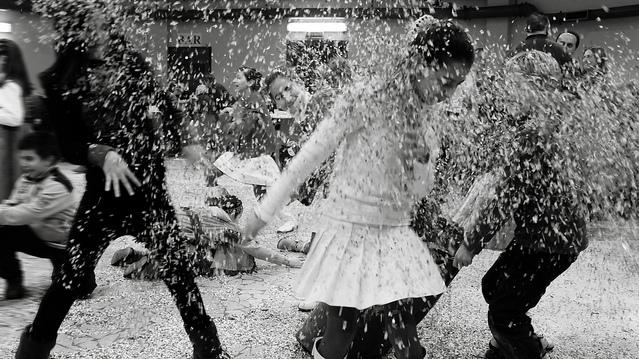 It’s popular and picturesque, but did you know that…

Carnevale has been keeping us company for a few weeks already and the country will celebrate its end with a bang on Shrove Tuesday. Very little people do not know about this famous Italian recurrence, exported all over the world. So much Carnevale is loved outside of Italy, that some of its foreign incarnations – read Rio, New Orleans or Notting Hill, in London – have become as famous as the original.

But the Italian Carnevale remains king. Ever the chameleon, it changes dress, face and attitude in each and every town celebrating it: it should come as no surprise it may still have some secrets to reveal. Did you know that…

1. The Romans gave us Carnevale

…or the Babylonians. Or the Greeks: the origin of Carnevale is very much debated, indeed, but the Roman Saturnalia are among its top listed forefathers. These were celebrations in honor of the god Saturn, during which everything was allowed: from orgiastic practices to lucullian banquets, from sacrificial rituals to presents exchange, Saturnalia were a period where both ordinary social order and habits were subversed. Saturnalia, which ran, as established by Emperor Domitian, from the 17th to the 23rd of December, had their own princeps (prince), a caricature-like figure representing infernal divinities such as Saturn or Pluto, guardians and rulers of the Roman’s Great Beyond, but also associated to the fertility of the land and good harvesting. The princeps used to wear devilish masks and lead Saturnalia celebrations for the entire week.

Reminds you of something?

2. …Or was it the Babylonians?

Apparently, the Babylonians had an interesting way to honor the mythical struggle between the creating god Marduk and Tiamat the dragon. The fight, that was considered the origin of life, was commemorated every year shortly after the Spring equinox through parades, masquerades and a period of social and moral freedom (or should we call it debauchery?).

3. Fano is the oldest Carnival in Italy

Fair enough, pinpointing the origin of Carnevale is not simple and maybe not even historically possible. What can be done, though, is to accurately identify the first organized Carnevale in the country: according to manuscript documents, it was that of Fano, in the Italian region of Marche. The attesting document is kept in the town’s Bishopric Archives and dates the earliest celebrations back to 1231. This makes the Carnevale di Fano more than a century older than previous documents from the State Archive Section had shown.

In 1871, an organizing committee was created and, still today, more than 100.000 people are involved in Fano’s Carnival every year. We are talking about the most important festival in the Marche region, attracting thousands of visitors.

The Carnevale di Fano is known mainly for two things: its floats and its closing ceremony, il Rogo del Pupo. Fano’s floats are not only famous for their creative output and colorful characters, but also because during celebrations sweets, cookies and chocolates are dispensed by those on board to all people in the streets. Il Rogo del Pupo is the re-enactment of ancient sacrificial rituals: on the day of Giovedì Grasso, the Pupo float comes out on the streets of Fano: for six days the Pupo becomes Fano’s leading figure and supervisor of all celebrations. On Shrove Tuesday, the last day of Carnevale, its float is ritually set on fire, in a symbolic act of expiation of the week’s excesses, thus making everyone ready for Lent.

From a famous Carnevale to another, that of Viareggio. Here, the spirit of Carnevale is embodied by a mask, that of Burlamacco, invented by local futurist painter Uberto Bonetti. The idea was to create an effigy to symbolize the Carnival in the rest of Italy and abroad, a sort of advertising testimonial aiming at bringing tourists to town. Burlamacco, who inherits his name possibly from the canal passing through Viareggio, la Burlamacca, or from the Italian word for prank, burla, is a clown made up using the most recognizable features of other traditional masks: his hat is that of Roman Rugantino, his cloak that of Bologna’s Dottor Balanzone, his checkered outfit derives from Arlecchino‘s, his ruff is that of Liguria’s Capitan Fracassa and the pom-pom button comes from the famous French character of Pierrot.

5. Let us thank an Italian for cartapesta!

Carnevale would not be the same without floats and floats would not exist if there was not cartapesta, papier-maché. Before its invention, there were floats, but they were heavy and cumbersome: the first was created in Viareggio in 1873 by a group of men working at the local port. Inspired by the engineering techniques used to build large ships, they produced an impressive, yet difficult to maneuver, float. The actual characters on it were made entirely in plaster. In 1925, Italian Antonio D’Ariano imagined a whole new way to create figures, large and small, to use on floats: terracotta’s models where covered in plaster, creating a hollow copy, which was then filled with layers of damp paper. Once dried, the paper figure could be easily removed from its plaster model, leaving its creators with a perfect copy of it, just much lighter.

You call them confetti in English, we call them coriandoli, but they are always the same thing: those little, colorful snippets of paper we are often inundated with at Carnevale, which manage to get inside our underwear and shoes with the ease a bird flies. Love them or despise them, in Italy there is little that says Carnevale as much as coriandoli. Do you know where their name comes from? I admit that, in spite of being Italian, I did not know it and the reason never really occured to me either, but here it goes. Apparently, a few centuries ago people in Italy got into the habit of using coriander seeds as a Carnevale prop: they would take them, cover them with a thin layer of plaster and throw them on people, just as we still do today. Why coriandoli? Well, because “coriander” in Italia is coriandolo, and the little plaster covered seeds just inherited the name of the plant they came from.

In time, colored paper took the place of coriander seeds, but the name remained.

7. Last but not least: why do we eat chiacchiere during Carnevale?

As a Piedmontese, calling them chiacchiere (tattles or gossip or useless chitchat in English) is very strange: we call them bugie, which translates rather uncerimoniously in “lies.” Truth is (forget the pun, it was not intended!) these typically Carnivalesque fried cookies have pretty much as many names as we have regions; actually, there is even more, with at least 40 different words used throughout the country for this light-as-air, yet rich-and-sweet pastry. You may hear people calling them bugie, struffole, cioffe, frappe, chiacchiere… they all refer to the same thing.

Standard Italian has chosen chiacchiere for them, but truth is each area keeps on using whichever noun is typical there: you would never find a Piedmontese calling them chiacchiere and not bugie.

It seems the origin of the name chiacchiere came from the fact they are very easy to make and you only need a handful of ingredients to prepare many of them, just as it happens with gossip: you need a minimal amount of information to make up a lot of things!

Seven little stories behind some of Carnevale’s best known symbols: did you know any of them already?

Check out our other articles dedicated to Carnevale: see some beautiful masks from Venice Carnevale, or read about Carnevale’s typical food, its traditional masks and vocabulary.