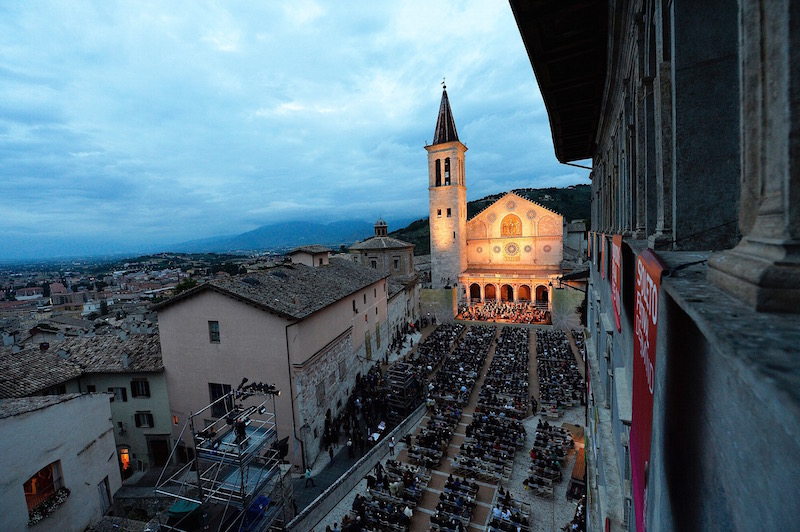 If you’re planning a trip to Italy next summer, and more specifically to Umbria, you might want to consider coming when the Spoleto Festival of Two Worlds takes place, usually the first two weeks or seventeen days in July. The 60th edition takes place from June 30 through July 16 in 2017.

Founded in 1957 by composer and conductor Gian Carlo Menotti, this multi-faceted feast of cultural events has been copied in the United States, with the version in Charleston going strong since 1977 and similar types of festivals planned for Nashville, Tennessee, and Tidewater Virginia.

There have been many music festivals around the world for years, but Menotti’s conception was the first to feature a lavish buffet of cultural happenings whose programs range from grand opera to conferences on science and economics, classical ballet to experimental theater, chamber music to daily jazz concerts in the town square, mock trials of historical figures such as Freud and Arafat to marionettes, art exhibits to classic and cult cinema.

Over the years many young artists of diverse fields have been launched through their performances/exhibits here and gone on to become household names worldwide.
In 1999 Luciano Pavarotti came to the rescue of Flamenco dancer Joaquin Cortes, who could not dance because the stage in Piazza del Duomo was drenched by the rain. Jerome Robbins, the Harlem ballet, Rudolph Nureyev, Mikhail Baryshnikov, conductor Tommy Schippers (whose ashes are buried in the wall in the piazza to the right of the cathedral), Anna Moffo, Jill Clayburgh, Shelley Winters, Al Pacino, Renee Fleming, Jacqueline du Pre’, Peter Serkin, Sviatoslav Richter, Twyla Tharp, the Mclain Family Bluegrass Singers, and Franco Zeffirelli are just a few of the artists, directors, and conductors who have performed at Spoleto.

The town of Spoleto itself, a community built on a hill beginning around the fifth or sixth century B.C. can boast some of its original protecting walls, along as a second century amphitheatre just outside the walls. It was a sleepy hill town in 1958 when Menotti organized the first festival, and has since become known world-wide, with Spoleto almost an adjective for “Festival”. It is a convenient hour and fifteen minutes train ride from Rome on the Rome-Ancona route. (Leaving the Spoleto train station you are welcomed by a mammoth iron sculpture by Alexander Calder which represents a horse or a Roman helmet depending on who you talk to).

A visit to Umbria could include the town of Assisi, the home of St. Francis, the hill town of Todi, visits to wineries and ceramic factories in Deruta along with meals at some of the best restaurants in Italy. But visitors should save at least three days (or more) for Spoleto in order to enjoy not only the views and the charming town itself but the variety of cultural events offered by the festival.

The opening and closing symphonic concerts held in the enormous piazza in front of the Duomo are always sold-out events, and the experience of hearing the exquisite music performed in the fading twilight as swallows flutter around the facade and tower until the last light is unforgettable. There are some 200 events held during the festival, even more if you count hearing a performer rehearse on his violin or piano in his hotel or the sweet tones of a soprano wafting over you as you pass by on the narrow street below.

It is said that one of the reasons that Menotti chose Spoleto for the home of his festival was because in the mid-fifties it was the only town in Italy that would agree to closing the center to automotive traffic which helped to create an atmosphere congenial to the artists, visitors, and spectators. Exploring the town on foot and discovering its hidden corners is one of the pleasure of the visit.

The two weeks of the festival are full of events, from the morning to night, some have free entry, for others you need to pay. The events are divided into opera, music, theatre, art, dance and talks.

A day or two (or even three) spent in Spoleto could go like this:

Breakfast in your hotel or in one of several bars which also have great “cornetti” (croissants) and pastries, followed by a stroll through the narrow streets and visits to the many art galleries opened just for the occasion, and shops featuring works of local artisans. There are always several art exhibits arranged by the Festival, in 2005 the young Greek artist Demetrios Psillos designed the colorful poster and exhibited his paintings in the Terazza Frau whose gardens overlook the tiled rooftops of Spoleto and the surrounding rolling green hills.

There are a number of comfortable places to stay in Spoleto ranging from the hotel catering mostly to religious travellers run by nuns just inside to walls (be warned, there’s no air conditioning) to very comfortable places such as the Hotel Clitunno, just a few blocks from the Piazza del Duomo, within walking distance of everything. The hotel is located on a small piazza and features a terrific restaurant (you can also sit outside) with delicious food at reasonable (for Italy) prices. The chef is the wife of the owner. I enjoyed several very good meals there including a dessert of mint ice cream with chocolate sauce. Delicious!

Check the official Website for the full program and more information: http://www.festivaldispoleto.com/