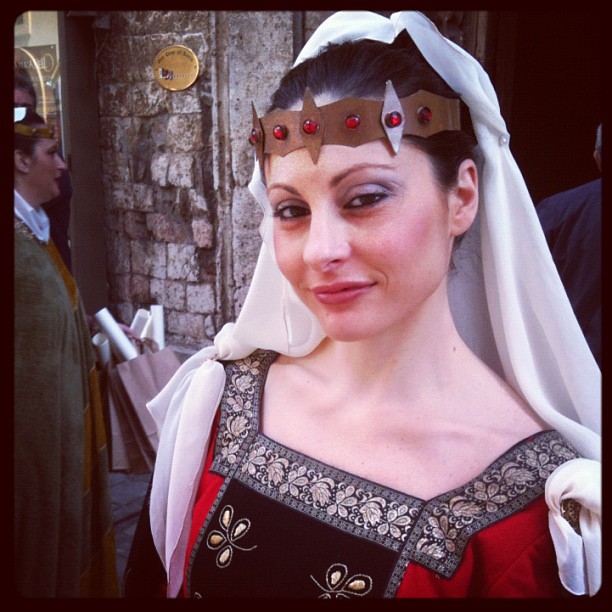 If you appreciate and are really interested in the Middle Age tradition, Italy is rich in borghi, hamlets, and little villages celebrating their tradition in honor of this era. Several festivals and themed events are organized.

La corsa dell’anello is an interesting occasion to see a traditional performance and visit an ancient place. The event takes place in Narni, in the region of Umbria, between April and May. It is renowned also on an European scale due to the great attempt to relive special links with the origins and promoting, thus, a lot of tourism attracted by folkloric events.

The corsa all’anello is carried out during cheerful celebrations happening for about two weeks in the streets of the town, re-experiencing old traditions based on games and rituals.

In the past people commemorated the saint of the town and during the night of 2nd May offers were made to the patron saint. After the religious consecration, games and leisure activities began to entertain the local inhabitants and their start was always announced in the streets of the town. Among the most famous games the one to have survived and become quite famous turning itself into a folkloric attraction is the Corsa all’Anello (race for the ring) which saw the participation of horses and knights.

The event is based on a competition taking place in the center of the town in which the knights had to stick a lance into a ring, whose target was 100 soldi cortonesi worth (the equivalent to two florins), hanging by means of two wires at full gallop. The order of start depended on the brigade the knights belonged to: Mezule, Fraporta, Santa Maria.

Today the event is an occasion to celebrate the traditional roots and value the beauty of this ancient little hamlet. The ancient corsa took place in the Platea Major, which is now called Piazza Priora that represents a witness of what the race used to be like and what it is like today, experiencing its revolutionary spirit in the course of time. The first edition of the modern race was organized in 1969 when drums and the banditore, town crier, inaugurated the historical event.

People taking part in the event as participants or as tourists will have the opportunity to re-experience what is considered a living custom also thanks to the presence of local dancers and music bands so that an evocative atmosphere is created in as the most loyal way as possible taking the original event as point of reference by means of cheerful dancing putting on stage daily activities like the washing up and weaving. Together with it, an acting company entertains tourists with their performances set within Medieval routine scenes.

The race takes place on the first or second Sunday of May, but the whole festival goes on for about two weeks. The first day for celebrations is inaugurated according to the Medieval spirit; after several celebrations with religious matrix, the town will be flooded with the historical parade opening the Corsa dell’Anello that will take place in May at the Campo de li Giochi. Knights will challenge each other to win the competition.

Whether you are a Medieval estimator or not, this is a good occasion to see another part of Italy, the less known and the one that is strictly linked to old traditions leaving modern life apart for some days and taking part into a XVI century event where time seems to have stopped thanks to special settings and costumes and its taverne, country pubs, turning themselves into traditional Medieval restaurants where timeless recipes are tasted: no matter the historical period, “the one charm of the past is that it is the past” and this is the right opportunity to live it and not only remember it!