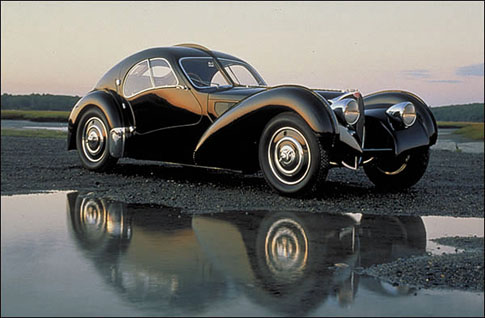 The Birth of Ettore Bugatti

Ettore Bugatti was born on September 15, 1881, in Milan, Italy. His father was a well-known artist and carpenter. The furniture he built was exquisite and sold well beyond the Italian borders. Little did he realize that his newly born son would leave a mark of his own on the world.

Ettore attended finishing school and went on to Milan’s Academy of Art. He then began an apprenticeship at the Prinetti & Stucci bicycle factory. The automobile had just been invented and young Bugatti was bewitched with its mechanics and technology. At the tender age of 17 years, he installed a motor on a tricycle. After that, he installed twin DeDeon engines on another tricycle. In 1897, he raced his first vehicle, a bicycle.

By 1901, Bugatti had created his first automobile with the help of the Gulinelli brothers. He introduced it in Milan at the International Exhibition. The French Automobile Club presented him with the T2 prize for the vehicle’s construction.

Bugatti approached the de Dietrich Company and asked them to produce his vehicle. After some minor difficulties, the license was granted. Because Bugatti was still a minor, under 21 years, his father signed the contract on his behalf. In the next few years, he produced five more vehicles for Cologne’s Deutz Company.

Ettore Bugatti spent a great deal of time developing and building racecars. This made the de Dietrich Company unhappy. They felt his time would be better spent developing a series production. Since Bugatti wasn’t obliged to accommodate de Dietrich, his contract was terminated. At this time Bugatti sought employment at Emi Mathias. He designed a new automobile and installed a 4-cylinder engine. Within two years, problems cropped up between Bugatti and Emil Mathias. Again, the contract was terminated.

Ettore Bugatti wasn’t put off by the contract terminations. His goal in life was to design racecars and he worked toward it without the restrictions of a contract. He developed an automobile that had a 50hp engine in 1906. He offered it to Deutz the following year. They already made gasoline-powered engines. A license was obtained by Deutz to produce the car and Bugatti was chosen to lead the production department, which was located in Cologne.

When Bugatti had free time, he worked in the basement of his apartment in Cologne, creating automobile designs. It was here that he developed the Model 10.

When Ettore Bugatti’s third child was born, he decided to open his own plant. In early 1909, with the financial support of banker de Vizcaya, he opened his business in the town of Molsheim, Germany. He borrowed additional funds from Darmstaedter Bank in order to build five aircraft and ten automobiles.

In January 1910, the first machines for Bugatti’s plant were delivered. Five cars were built that year. All five sold. The same year, Bugatti’s assistant, Ernest Fredrich drove Bugatti automobiles in races. This was the beginning of the legendary success for Bugatti cars on the racing circuit.

Bugatti experienced several wins on the track in 1911. The most amazing was a second place finish at the French Grand Prix. The Model 10 beat out stiff competition whose cars were more powerful. That year, a contract was signed between Bugatti and automaker Peugeot. The Babe Peugeot with a Model 19 engine was produced. The Babe was a huge success and was used in the majority of Bugatti cars.

In 1921, Bugatti’s race team took first, second, third and fourth place in Brescia at the Voiturettes Grand Prix. The wins immortalized the Bugatti Model 13. From that time forward, every 16-valve engine was stamped Brescia in honor of the race site.

In 1922, Bugatti equipped the 29/30 racecar with 8-cylinders. It had hydraulic brakes and a revolutionary chassis in the shape of a cigar. Dubbed the Cigar, the car made its debut in the ACF Grand Prix. It took second place.

There was a lot of excitement caused by Bugatti at the ACF Grand Prix in 1923, when a car with a blade-shaped chassis, known as the “Tank” made its debut. The “Tank” had a newly developed 8-cylider engine and a short wheelbase. It was driven by Ernest Fredrich and placed third.

Ettore Bugatti wanted to offer his customers an attractive racecar. In 1924, the Bugatti returned to a traditional chassis. The Model 35 was the first Bugatti to sport aluminum spoke wheels. It was equipped with a 2-liter 8-cylinder engine. Later that year, the engine was upgraded to 2.3 liters. The Model 35 racked up 2,000 victories if all variations are considered. It was the most successful racecar on record and continues to be so to this day.

Ettore Bugatti had a dream. He wanted to build the most luxurious car ever made. His dream was realized in 1926, when the Royale debuted. It had a 12.7-liter engine with 300 hp. Sadly, the Royale came onto the market just as the world plummeted into the Great Depression. Only three Royales were sold and Bugatti was in dire financial straits.

Sun Among the Clouds

The years of 1932 to 1934 were very difficult for Bugatti. However, Ettore was able to find a glimmer of sun among the clouds. He won a contract with the French government to build a new, high-speed train. Railcars were built at the Bugatti plant and the technically superior Royale engines were used. The French government was delighted with the result. This contract put Bugatti back on solid financial ground. The train was the exclusive design of Ettore himself. The only car being produced at this time was the Model 57. Approximately 750 of these sedans were built and sold.

Bugatti’s world was changed forever in 1936. His employees wanted better working conditions and an increase in pay. Ettore had always treated his workforce fairly, providing good social benefits and above average earnings. This caused him to take the strike demands personally. Though he had always had a close relationship with his employees, he now withdrew to his office in Paris. The strike caused a rift in the Molsheim plant that never healed.

In 1937, drivers Robert Benoist and Pierre Wimille were victorious at Le Mans. They drove a Model G57 Tank.

As the decade of the 1930s came to a close, Ettore Bugatti once again found himself and his company in financial upheaval. Jean, his son, encouraged him to enter a team to race at Le Mans. Drivers Pierre Wimille and Pierre Veyron shared a Bugatti car with a 57 series chassis that had a compressor. The two brought in an important win. This was the last big victory for the Company. Bugatti’s son, Jean, was killed during a test drive on August 11, 1939. Within a few days, WWII broke out.

When WWII ended, a few weak attempts were made to revive production at the Molsheim factory. Because of financial problems, Bugatti was unable to produce any new automobiles.

Ettore Bugatti contacted a lung infection and died in a Paris military hospital on August 21, 1947. During the time that he led the Company, approximately 7,900 automobiles were produced. Many of them have survived to present day, which attests to Ettore’s genius and skill. He left behind a legacy of great contributions in the history of the automobile.