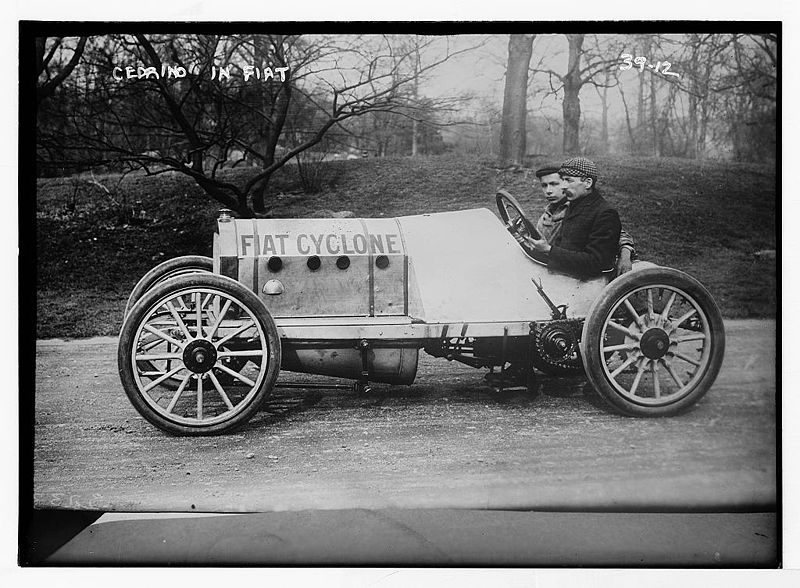 As the field of science progressed throughout the Renaissance, it took an Italian, the first engineer, the famous Leonardo da Vinci, to think in concrete terms of an idea similar to that of modern era automobile. Then in 1769, Nicolas-Joseph Cugnot, a French engineer, invented the steam dray, a low, strong cart used for transporting heavy loads. The prototype was powered by a steam engine of 62,000 cm³ and was capable of carrying over 4 tons of cargo. The invention of this steam machine was the beginning of the history of motorization. The original Cugnots steam dray is exhibited at the “Conservatoire National des Arts et Metiers” in Paris and a copy can be admired at the “Museo dell’automobile Carlo Biscaretti di Ruffia” in Turin. Three decades later in 1807, François Isaac de Rivaz presented the first prototype of an internal combustion engine. Mounted on a wagon, this engine was fitted with a piston and its explosive fuel mixture consisted of about 2 dm³ of gas and coal, and 10-12 dm³ of air.

But it wasn’t until the 1850s that the development of the modern car reached a turning point, thanks to Nicolò Barsanti. Better known as Eugenio, Barsanti was an engineer, inventor, and Italian priest. Barsanti gained his inventive insight by observing the behavior of a Volta pistol, where a mixture of hydrogen and air, ignited by a spark, caused a big explosion, ejecting a cap.  He took advantage of the physical principles behind this explosive propulsion and used it in the design of his engine. When Barsanti moved to Florence he was able to develop his idea, especially after having met the engineer Felice Matteucci, with whom he continued to work for the rest of his life. In 1859, they succeeded in patenting their engines in England, France, Belgium, Prussia and Piedmont, though Italy was not yet unified and could not guarantee the protection of an international patent. This engine was named Barsanti-Matteucci internal combustion engine. The construction of this engine began in Florence in 1860 at the mechanical workshops of Pietro Benini, who inherited the Pignone foundry from his father Pasquale. Later, the engine was set up and operated during Florence’s National Exposition of Arts and Industries (l’Esposizione Nazionale di Firenze delle Arti e delle Industrie).

The Birth of FIAT

But the real history of Italian cars begins after Italy unified into a nation, when on July 11, 1899, F.I.A.T. (Fabbrica Italiana Automobili Torino) was founded as a company, after acquiring other major Italian brands.

The first model produced by Fiat was the Fiat 3 ½ HP. Built in 1899 by design engineer Aristide Faccioli from an inspiration he received from his previous drawing of the Welleyes, the 3 ½ HP had a maximum power output of just 3.5 hp and 400 rpm. Fiat produced just eight copies of the automobile, a far reach from what modern automotive assembly lines can churn out, but at the end of 19th Century, the car was not a common good, but a luxury that only a wealthy few could afford. The 3 ½ HP was not equipped with a reverse gear and its frame was made of wood.

A few years later Fiat achieved the first of many victories in car racing with the help of Vincenzo Lancia, winning the Torino Sassi-Superga in 1902. In subsequent years, Vincenzo Lancia was to create his own car company.

In 1905 the “Aquila Italiana” (Italian Eagle) opens in Turin, when the young Italian-born engineer Giulio Cesare Cappa, who owned a small workshop for the repair and construction of internal combustion engines, met Giulio Pallavicino, who then financed the construction of a new engine designed by Cappa, which they mounted on an automobile prototype. The prototype marked the evolution of future four wheel models, and was the first to adopt important engineering solutions such as the use of ball bearings for surfaces subject to friction, the piston alloy, and using the pedal clutch to initiate the ignition command instead of the awkward handle used up to that point. After the success of the prototype, Pallavicino proposed that Cappa convert his laboratory and workshop into a company for producing cars full time. Also participating in the company was the famous musician Gustavo Malvano, but unfortunately, both Malvano and Pallavicino were killed on August 31, 1907 when their car was destroyed by a train at a level crossing.

The premature death of Pallavicino and Malvano left the company without a director or funding, so it was acquired by a creditor bank at the insistence of Vincenzo Marsaglia, son of Pallavicino, who left Cappa in place as manager. The ultimate decline of the company began in 1914, when internal disagreements led to the firing of Cappa (subsequently recruited by FIAT), and then with the decision not to convert the plant to wartime production. Aquila Italiana was eventually absorbed by SPA (Società Piemontese Automobili).

Lancia was opened in Turin in 1906 by the famous Fiat driver Vincenzo Lancia, who, together with Claudio Fogolin, founded the company called Lancia & C. The company logo design was entrusted to Count Carlo Biscaretti di Ruffia, a big fan of the motorsports (who later founded the homonymous car museum). The first model produced was the Lancia 12HP in 1908. Vincenzo’s brother Giovanni suggested using Greek letters to name the different models, and the Lancia Alfa was born, selling 108 models. Able to reach speeds up to 90 kmh (56mph), the Alpha had a 28hp 2544cc engine with a shaft drive instead of the more popular chain, and without a doubt was a really attractive car.

Since its first years in the business, Lancia was very competitive in racing, though Vincenzo Lancia didn’t often occupy his cars’ drivers seat as he feared too much direct participation in racing might affect the management of  his company. But that didn’t mean he never raced, and on April 5, 1908, won first place in the straight section race at Padova-Bovolenta, and two years later earned “best performance in class”. Also in 1908 during its first year of racing activity, Lancia obtained two important victories in the U.S., thanks to William Hilliard. The first was placing third overall at the Meadowbrook Sweepstakes in Long Island on October the 10th; the second was on November the 25th , when Lancia won The International Light Car Race of the Automobile Club of America.

The Birth of Alfa Romeo

Alfa Romeo was founded on June 24, 1910 under the name A.L.F.A. (Anonima Lombarda Fabbrica Automobili). Like Lancia, the name again recalls the Greek alphabet, but this time Alfa wished to express the beginning of a new type of automobile, cars especially built to be sports cars.

From the first moment of Alfa’s inception, the company wanted to remember its link with its city of origin, Milan: on the left side of the company emblem appears a red cross with a white background, just as Milan coat of arms, and on the right, the famous “Biscione”, the insignia of the House of Visconti, which ruled Milan from the Middle-Ages until the Renaissance.