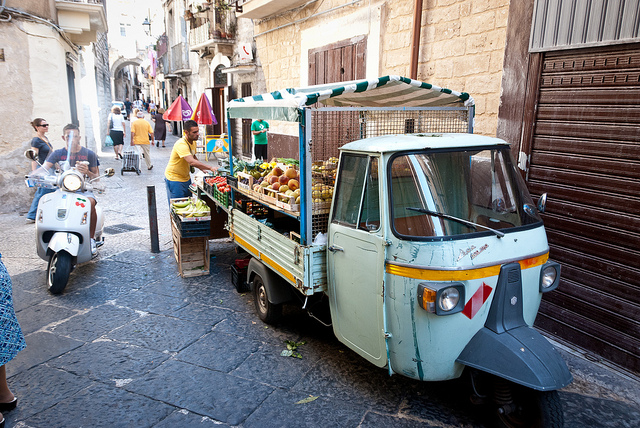 American tourists, being used to large pick-up trucks, are always amazed when they see this little micro truck roaming around all the small towns in Italy. This micro truck has been an essential business transportation since post WW2 in Italy. Outside the main cities Italy has thousands of small towns, most of them designed in the medieval times on top of a hill or mountain to better defend against invaders. These towns have very small streets where the Ape is King.

The “Ape,” (pronounced ‘Ah-pay’) which literally translates into “Bee”, is an innovative mini truck on three wheels. Piaggio produced it for the Italian market, targeting workers and small contractors in need of carrying heavy weights but not willing to invest money on a big truck or simply not having enough space for operating. The Ape made its first appearance in 1948 and basically is a Vespa (moped) with a large square trunk and a cabin. Both Vespa (wasp) and Ape have two-stroke engines that create a characteristic buzz that recalls those of a wasp and a bee, hence their names.

In fact, the technology and driving gears are exactly the same as the Vespa, also manufactured by Piaggio. Throughout the years different styles of Ape were developed, mainly differing in the structure of the back, from closed to open, but the basic model has been virtually the same since the beginning; different engines have being used following the market needs and user trends.

Originally there were three engines types: 50cc, 125cc and 150cc, then later a 175c was added, mirroring pretty much the engines available on the Vespa. The 50cc is the one that actually revolutionized everything because it truly felt like riding a moped, and it allowed young people to move around on a motor vehicle for the first time. Italian law doesn’t require a driver’s license for 50cc.

The different models, from the Ape van to the Ape open-on-the-back, and the variety of colors available, made the Ape extremely popular and it spread throughout Italy just like its sister Vespa.

Additionally it permitted growth for small businesses that could use the low cost vehicle for deliveries and transportation of goods, allowing savings to be reinvested in the business itself. Culturally, it also helped to bring the country people into the cities, as the Ape was a great way to transport agricultural goods back and forth from the countryside to the urban markets. In this sense, Ape played a large role on the previous century’s growing Italian economy. Even today with modern technology and a richer society, the Ape is still very much present in everyday Italian life.

The interesting thing about this bizarre and yet useful three-wheeled vehicle is that it never showed large export numbers and although Piaggio has otherwise been successful in exporting its products, the Ape remained basically an Italian phenomenon. It piques the interest and curiosity of tourists, but apparently not the business people of other nations.

Only one country in recent years has started producing the Ape under a special license agreement: India. The Ape is similar to some motor coaches already in use in the Asian giant and adding the Ape seemed to be a logic extension. Along with the models already produced and widely used in Italy, India added an interesting feature: the “Ape Calessino” (the little stagecoach), where the back, usually used to carry merchandise, is replaced by two comfortable seats to transport people. This transformed the Ape from a truck-like vehicle to a mini taxi, and it turns out that the Calessino is a useful means of transportation, especially in places with narrow streets and a high density of traffic and population.

Over the years, many people have customized their Apes in different ways, some extravagantly, adding stereo systems and the latest accessories, but the standard models are very basic and raw. Essentially a vehicle consisting of a steering device, brakes, and a set of shifting gears, the Ape has proven to be steadily successful, and still in 2016 is quite popular. If the past is any indication, the Ape will likely be around for another century, buzzing around Italy like its namesake for the foreseeable future.