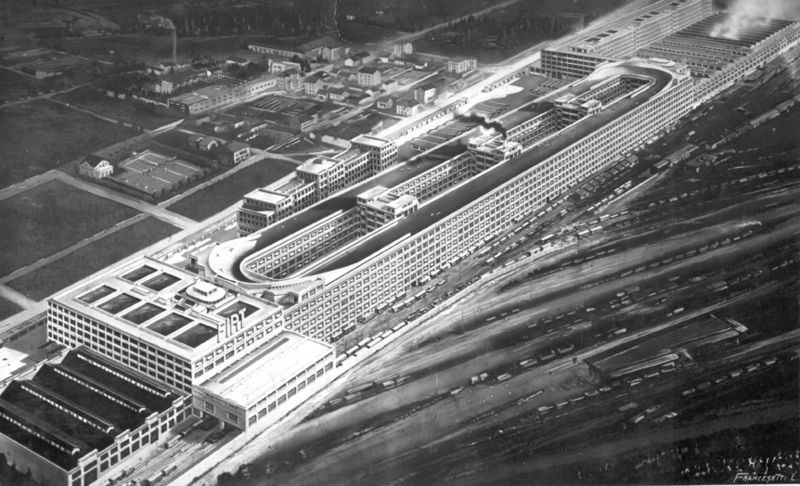 In 1914, after the murder of Archduke Francesco Ferdinando in Sarajevo, Austria declared war on Serbia, leading to World War I. The conflict would last for 4 years, during which most European car companies were forced to gradually convert their production, totally or partially, to something more lucrative and timely, namely warfare.

At the end of WWI, the industry re-converted its production back to civil vehicles as request for cars, once again, began to rise. While Italians were trying to return to the everyday life, a new struggle was born just at the end of the war, when in 1919, Benito Mussolini founded the “Fasci Italiani di Combattimento”. Later in 1922, Mussolini’s party marched on Rome, and this event signaled the beginning of a dark era for Italy, the birth to Fascism.

Senator Giovanni Agnelli wasn’t one to think small. Inspired by the Ford automotive plant he visited, Senator Agnelli started his own project because he realized that the only way to achieve lucrative results was through mass-production, and in 1922 his famous “Lingotto” establishment was ready. The Lingotto was born from a project by Ugo Gobbato, who equipped the roof of the building with a race track used to test new models. The Lingotto appears in the 1969 movie “The Italian Job” and recently appeared in a commercial for the Grande Punto (Grande Punto – The Italian Job Remixed). In 1925, a new model was born to the new Lingotto establishment, the “Fiat 509”, and after only a year it was the most common car in the country, selling over 90000 models. The poet Gabriele D’annunzio compared the 509 to a woman, saying it had grace, slenderness, the vitality of a seductress, and like all women, the ability to pass with ease everything rough on its path.

In 1932, Fiat launched the “Fiat 508 Balilla”, replacing the 509, though it followed the same design. The 508 was intentionally designed, for the first time, to attract women drivers. A very large advertising campaign was done to advertise it, and the Duce himself drove it at Villa Torlonia. The car had a price of 10.800 lire and many italians couldn’t afford it because its price exceeded the average employee’s annual wage, so many bought it using promissory notes.

The era was that of Fascism and Fiat wasn’t free to expand its production in foreign countries. Benito Mussolini wanted a low cost car for people, so he called Senator Agnelli and asked him to build a car with a price under 5000 Lire, an idea with great propaganda impact. So impactful in fact, that Hitler copied the idea, asking Ferdinand Porsche to build a car under 1000 Marks, which resulted in the internationally popular Volkswagen Beetle. On the Italian side, in 1936, Fiat sold the new “Fiat 500 A”, a car born to fulfil Mussolini’s ambitions; but the price was not the one suggested by the Duce, starting from 8.900 Lire, more than twenty times the average wage of a worker. This car was renamed the “Topolino”, the little mouse, because the rear bodywork resembled a mouse, and also because of the influence of Disney’s Mickey Mouse.

In the decade after the end of WWI, Alfa Romeo expanded his racing activities, thanks to drivers like Antonio Ascari, Giuseppe Campari, Enzo Ferrari (founder of the car company “Ferrari”), and Ugo Sivocci, who all joined the racing team. Ugo Sivocci, a great friend of Enzo, he was considered the eternal second, though he was an awesome driver with huge technical experience. He was just very unlucky. So, before starting the Targa Florio of 1923, while riding the “Alfa Romeo RL Targa Florio” and trying to keep away the bad luck, Sivocci ordered a green, four-leaf clover with a white square background to be painted on his car. At the end of the race, just two hundred meters from the finish line, Antonio Ascari’s car died, but due to his commanding lead, his mechanics arrived in time and restart the engine, and overwrought with euphoria they all climbed atop the car to cross the finish line, suffering disqualification. At this point, Ascari went back to the place where his car had died to once again drive that portion of the track, causing him to finish second behind Sivocci, the winner. This was the first international victory for Alfa Romeo.

From that day forward the green four-leaf clover became the symbol of the Alfa Romeo racing cars, but despite the four-leaf clover, Sivocci never overcame his bad luck and died the same year at the Monza circuit.

In the decade just before WWII, Alfa Romeo was already a famous brand worldwide, thanks to drivers like Ascari and Giuseppe Campari.

One of the greatest models of Alfa, the “6C”, was born in 1925 and was sold from 1927 till 1950. “6C” is the acronym for 6 cylinder. Mussolini was an old alfista, and his first Alfa was the “20/30 HP”, which he received as a present from his lover Margherita Sarfatti, who later bought him the “6C”. From that moment on, the Duce only bought Alfa Romeos. One day, Mussolini was driving his 6C along “Via del Mare” linking Roma and Ostia, and after a game of overtaking with exchanges of glances and smiles, began the tragic love story of Mussolini and Claretta Petacci.

When we think about Italian cars we often think of the legendary sports car manufacturer, Ferrari. Everywhere from Saudi Arabia to the U.S., Ferrari is an Italian legend with a style dreamed of by millions of car lovers. The beautiful lines and sublime attention to detail of Ferrari’s sports cars cannot be imitated by anyone, and the successes in the F1 circuit confirms the legend.

Enzo Ferrari was one of the most famous drivers for Alfa Romeo and was a fearless and strong-willed man who never undervalued the risks of racing, especially in a time when safety was a far cry from today’s standards. He saw all his friends and colleagues of the Alfa Romeo team die in accidents during races, and in 1931 abandoned racing at the birth of his son, Dino. The comment he released before leaving the driver’s seat forever was, “My son could count on a modest prosperity, the fruit of my complex activity. But my son has the right to expect something else from me.”

The birth of Ferrari as a car manufacturer is often reported as taking place in 1929 in Modena, but the real birth of Ferrari is on September 1, 1939, when Enzo Ferrari founded the “Auto Avio Costruzioni”. 1929 was when the “S.A. Scuderia Ferrari” was founded, a racing team running Alfa Romeo exclusively. The “Auto Avio Costruzioni” was renamed “Scuderia Ferrari” in 1947.

The first real Ferrari was the Ferrari 125 S, built in 1947, only two of the cars were built. The fruits of this project enabled Ferrari to produce the “Ferrari 125 F1” the following year, and it was the first formula one car of Ferrari’s team.

During WWI, Lancia’s military vehicles were a huge success. The chassis of the Jota, Diot, and 1Z were fitted as trucks and for artillery transport. In 1918, Claudio Fogolin retired from the company, taking with him a huge amount of capital. Vincenzo Lancia was worried about the reconversion of Lancia’s plants, which would obviously produce cars for civilian use again, but he feared that he could not guarantee full employment for the plant’s workers unless production and sales of cars could be done in a greater scale than before WWI.

The first model designed to move in this direction was the “Lancia Kappa”, 1810 of which were produced from 1919 to 1922. But Lancia’s first masterpiece is dated 1922, when Lancia brought to life the “Lancia Lambda”, the car with a revolutionary design and modern solutions. The most revolutionary feature is the suppression of the chassis, which was replaced by a sort of monocoque. According to Pinin Farina, the idea of the monocoque would come to Lancia as he was observing the structure of a ship as it sailed at sea. At that time, as fate would have it, Lancia had a visit from an American named Flocker, who didn’t take long convincing Vincenzo of the wide horizons that could be opened to Lancia upon entering the U.S. market. Vincenzo Lancia told nothing to even his closest collaborators and ordered the company to abandon its current projects to develop a new idea: a larger car to enter U.S. market. Abandoning the idea of the monocoque, Lancia gave the technical office the task of designing a chassis that would be as strong and rigid as possible.

So, in 1928, Lancia birthed the “Dilambda”. Dilambda’s engine was an 8-cylinder V 24° with a maximum power output of about 100hp. About 1700 Dilambdas were sold, but tellingly, the exit of the car coincides with the collapse of Wall Street and the ensuing financial crisis, and that the Dilambda’s selling price was prohibitive in 1931, costing 58,000 Lire, while later, an Artena would cost 24.500 Lire.

In 1931, the Artena and Astura were introduced to replace the Lambda and the Dilambda, and the Astura was widely adopted as the official government transport for high dignitaries of Mussolini’s regime. Mussolini himself loved the Astura and had a custom 1939 Lancia Astura designed by Pininfarina in which he paraded several times through fascist Italy streets.

The Pininfarina company was born in this period, though everybody knows the Pininfarina of today, which is active in the field of car bodyworks. It was founded in Turin on May 22, 1930 and named “Società Anonima Carrozzeria Pinin Farina” by Battista Farina together with Giovanni Battista Devalle, Gaspare Bona, Pietro Monateri, Arrigo De Angeli, and Vincenzo Lancia after Farina left the family enterprise.

In the first years of production until the outbreak of World War II, the company became known for its craftsmanship of a small number of special bodyworks designed for Alfa Romeo, the Hispano-Suiza, the Lancia, and the FIAT. Today, the Pininfarina brand is known worldwide and a lot of Pininfarina designs are seen on some of the most attractive and of famous cars.

The name Pininfarina comes from the Piedmontese where “pinin” means little.