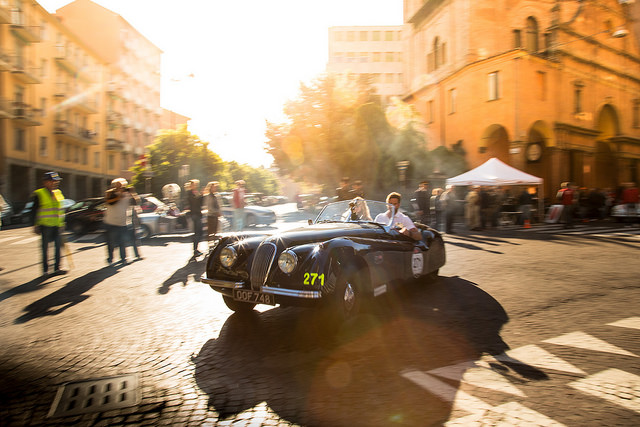 The famous Mille Miglia (meaning a thousand miles) is a very popular open road race in Italy, which had originally taken place 24 times, from 1927 till 1957. Much like the earlier Italian races of Carrera Panamericana and the Targa Florio, Mille Miglia has made many sports car makers world-famous such as Porsche, Maserati, Ferrari and Alfa Romeo.

In all modern rally races, the cars are released at one minute intervals, with the large and professional cars released before the smaller cars. However in the Mille Miglia, the slower cars were allowed to start first, before the faster cars. This has made the race much simpler for the organizers since the marshals did not have to be on duty for a very log time and the roads only remained closed for a short time.

History of The Mille Miglia

The race was first started by Franco Mazzotti and Aymo Maggi when the city of Brescia lost the Italian Grand Prix to the town of Monza. Along with a few wealthy families and friends they decided to start a race from Brescia to the city of Rome and then back again. The race course was figure-eight shaped and was 1500 km or around 1000 Roman miles long. In the later years of the race, as many as twelve other routes were used, all of them with different lengths.

The first Mille Miglia race took place in 1927 on 26th March with 51 of the over 70 starters reaching Brescia, the finishing post by the end of race. The first covered a distance of 1618 km. The entry at the time to the race had been restricted to only unmodified cars and the entrance fee was just 1 lira. Giuseppe Morandi was the winner of the first Mille Miglia, and he completed the race in 21 hours and five minutes. In 1930, Tazio Nuvolari won the race in his Alfa Romeo by defeating teammate and rival Achille Varzi.

During the years that the Mille Miglia has taken place, the race has generally been dominated by Italian drivers, driving Italian cars. However, three races were won by foreign cars too and all of them were German. Rudolf Caracciola won in 1931 in a Mercedes along with mechanic Wilhelm Sebastian.

Some spectators were killed during the 1938 Mille Miglia and so the race was briefly stopped by Benito Mussolini, resuming in 1940 during World War II. The race was then given the name of Grand Prix of Brescia and it had several short courses in northern Italian regions at the time. In this 1940 race, Enzo Ferrari debuted his first design, the AAC tipo 815.

Mille Miglia after the War

After the war, the race returned to its previous format and also continued to be dominated by Italian drivers. In 1952 Mercedes made a good effort, finishing second with Karl Kling and Hans Klenk in the original Gullwing 300SL.

Once again Italians won, but Peter Collins, Wolfgang von Trips and Juan Manuel Fangio did manage to win the Mille Miglia during the 1950s. The team of Stirling Moss and Denis Jenkinson ran reconnaissance laps before the race with Jenkinson used as a navigator. Though this strategy using a variety of coded hand signals helped them, it was Moss’s innate driving ability which was most useful.

In 1954 Hans Herrman was in a remarkable race when he barely managed to pass below a set of lowering railroad crossing gates, just before a speeding train. This definitely took all the spectators by surprise. However, in the next race in 1955, Herrman was not so lucky and had to quit the race because of brake failure. The Moss and Jenkinson team set an event record of 159.65 km/h when they arrived in Brescia. This record would stand for two years.

The Mille Miglia was banned in 1957 when a fatal crash took place in a Ferrari. This crash took the lives of Alfonso, Marquis of Portago, and Edmund Nelson who was his navigator and thirteen spectators. The crash took place at the small village of Guidizzolo, probably caused by a blown tire. The Ferrari team which had not changed the tires in order to save time and were blamed for the crash along with the tire manufacturer, were sued.

From 1958 till 1961 Mille Miglia resumed for a short time as a rally type round trip race mainly run at street legal speeds, but it was quickly discontinued.

From 1977, Mille Miglia Storica began. This is a parade for all the pre-1957 cars that is held in May, which spreads over the course of a few days. In this race, which is a dream for classic car lovers, course time, not speed, is most important, showcasing the vintage cars, dating from the 1927 to 1957 races.