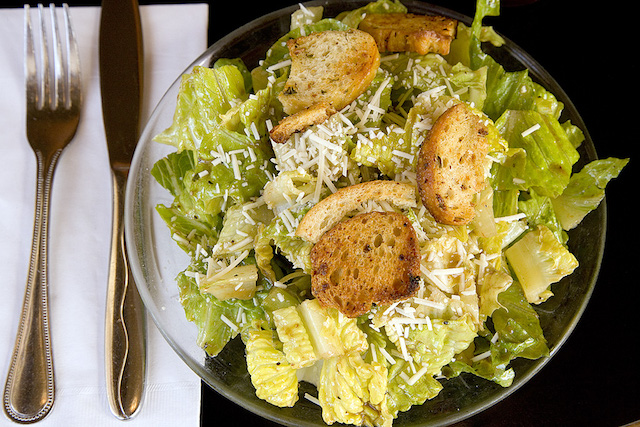 There are so many things we believe to be Italian that you won’t find in Italy at all. Read on, and learn which ones, among our best known Italian clichés are, in fact, not Italian at all.

The most famous salad served in almost every Italian restaurant in the U.S. is actually not Italian at all, but American. In Italy, asking for parmesan cheese and croutons on a salad would mean asking for quizzical looks in response, at least until recently. However, globalization has brought international menus to many Italian restaurants now,  and some have begun to offer it. Don’t be fooled, though. If you see “Insalata Cesare” on your menu, you’re still going to order an American dish!

2. Rolling Spaghetti with a Spoon

Italians NEVER roll their spaghetti using a spoon because those who do it are considered rude. The same thing applies to cutting long pasta with a knife. Regardless of what you might have seen or heard, don’t do it. If you’re having trouble rolling your pasta using your fork, just set the tines on your plate to help you.

In Italy, a salad is served as a side dish with a meal’s second course and never before the first. Asking for a salad as an appetizer is not common: Italians rather use salad to cleanse the palate after eating the majority of their meal. (this is actually changing in the last few years: more and more people eat salad at the beginning, because it reduces the hunger and you eat less)

4. Pasta and Meat on the Same Plate

Regardless of the type of restaurant, or the habit of your host, Italians never put two courses on the same plate. Pasta is one thing, meat, chicken, and meatballs are another: you will never see them mixed. Moreover, a good pasta dish doesn’t need to be drawned in sauce, as the pasta is supposed to be colored by the sauce and not immersed in it. Spaghetti and meatballs is one of the most popular Italian-American dishes today, but it has never been popular in Italy.

5. Cappuccino After (OR DURING!!) a Meal

In Italy, cappuccino is considered a breakfast drink. After midday, no true Italian would ever drink cappuccino, so if you decide to order a cappuccino after a full meal be prepared to receive a shocked glance from your waiter. Italians rather  go for a strong shot of espresso after eating.

6. Oil and Butter with Bread in a Restaurant

Olive oil and butter are common ingredients in Italian cuisine, but it is not an Italian custom to eat them with bread during a meal. Restaurants will never put butter or a bowl filled with olive oil on the table to dip bread in. Buttered or oil drizzled bread are usually considered afternoon snacks, and requesting them at a restaurant would be a very American thing to do.

7. Not all Italians Eat Pasta Every Day

While pasta is a popular dish, many Italians prefer to replace it with rice, minestrone, and soup. The Italian diet is usually rich in vegetables, meat and fish, which are present of the table every day. For some people, on the other hand, pasta is more of a two to three times a week affair.

In most cases, Italians eat more at lunch than at dinner, a meal which is typically eaten in the evening rather than in the late afternoon.

9. Couples Sitting Side By Side

Eating in Italy is a social event, so people prefer to be seated face to face. On a group outing or a double date a couple would rarely sit next to one another, allowing for more mingling.

Italian families with six to eight children are a thing of the past. Italians not only get married later than most Americans, they also have the lowest birth rate in the world and, as a result, the population is shrinking. Divorce is on the rise, and people often don’t start families until they’re well into their thirties. For a nation that has long based itself on traditional values of home and family this is certainly a  concern-rising problem.