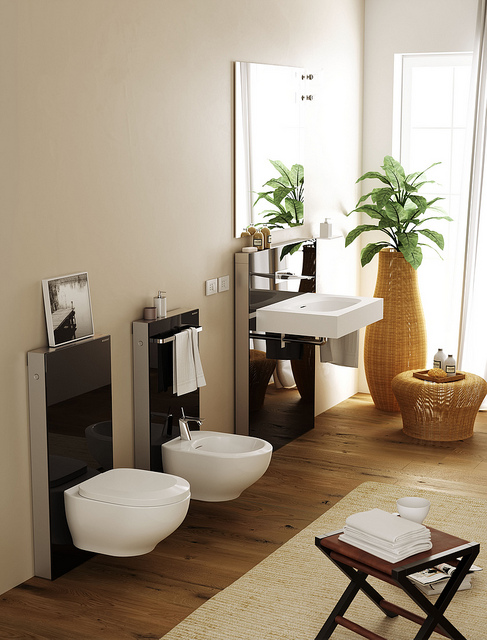 If you’re a keen web surfer, you may have come across a popular meme with the picture of a girl eagerly washing her hands in a bidet, its caption highlighting her question about why Europeans have such low sinks in their bathrooms… This is just a funny example of the confusion the presence of bidets in our bathrooms often rises in our non-bidet using’s visitors.

Truth is bidets are so ubiquitous in Italy and many other parts of Europe, we feel pretty confused when travelling for the first time to a country where they’re not part of the décor. Their history’s long and curious, so much so we already dedicated some space to it in a previous article.

What remains to be explained is why the trend has never quite taken up in the US. Some find an explanation in America’s own renowned modesty, which would bring people to squirm at the idea of touching their genitals without the shield of a piece of toilet paper.

Others, following a similar line of thought, associate the States’ dislike for bidets to how they got first in contact with them: it’s very likely that, historically speaking, bidets became known to the American masses after the end of the Second World War, when soldiers coming back from the European front brought home with them tales about Europe’s peculiar love for a porcelain miniature sink, often sitting quietly beside water closets. What’s the problem with it, you ask? Well, that the majority of G.I.s had seen bidets in brothels’ bathrooms and widely associated them to prostitution. As a consequence, poor, old bidets became a synonym for moral depravation rather than physical cleanliness.

In truth, there are some other theories behind the apparent disdain of Americans towards bidets.

Some root it even further back in history than World War Two and associate it to America’s forefathers, the Brits. Truth is they never really liked France and when, in the 18th century, the French created the first bidets Britain, with its usual aristocratic flair, scornfully looked down at their beyond-the-Channel companions’ new invention. The same attitude was quickly esported across the Atlantic and there it remained until today. Others, as briefly mentioned above, think bidet-using involves too much flesh touching for your average American, and sees people’s conservative mores as the reason behind bidets’ insuccess in the country.

Modern Americans are certainly more open minded. According to one of the US’ largest bathroom décor producers, bidets have become particularly popular among those who may have problems taking full showers and baths on their own, like the elderly, and enjoy the fact a bidet gives the opportunity to get clean “down there” without having to take a full shower. Being all about cleanliness, Americans have been, it seems, also conquered by widely reported data that using a bidet is more hygienic than simple wiping and can contribute to reduce the risk of UTIs.

Truth is, however, that bidets – alas! – have become status symbols. Yes, it’s funny: such a deprecated and frowned upon piece of equipment has turned into a sign of wealth. It’s pretty simple to see why: in the end, not many have one in their bathroom, so having it is already a sign of exclusivity.

One wonders if the Kardashians have bidets in their Calabasas’ homes…

5 Reasons Why You Should Own a Bidet

Where to buy a bidet in the US

It’s not that easy to find a bidet in the US. If you ask at a bathroom store they might not even know what you are talking about, and when they do, you’ll probably be offered a simple water sprayer. Nevertheless, there are a couple of places where you can buy a proper bidet.

At HomeDepot and Lowes you can find different types of bidet, in different shapes and colors. You can also choose the faucets you prefer.

Some Videos about how to use a bidet:

Above: A Funny video about bidet (well in Italy we do not consider this electronic spray a real bidet). Of course for us Italians it is completely normal to use the bidet after you’re gone to the toilet and you do not feel clean without using it.

Video below : How to use an Italian bidet. Just a note to what is explained in the video: it’s not the thickness that distinguishes a towel used for your downtown; it’s the size. Small towels are for downtown, medium towels to dry your hands, big towels for showers.

Above: Even Crocodile Dundee needed some time to figure out how to use the bidet.

You can totally use it with pants on… Like… Why wouldn’t you be able to use it with pants on? You simply roll them down at the ankles, clean what needs to be cleaned, dry down there with the towel and put everything back in its place. The towel is yours and reusable because you’re supposed to be clean after using a bidet and soap. Don’t you use the same towel more than once for your face? That’s the same.

Well, I don’t use bidets in public toilets, and I believe no one does, just at home or at my hotel room, where I can easily take off my pants and I use my personal towel.