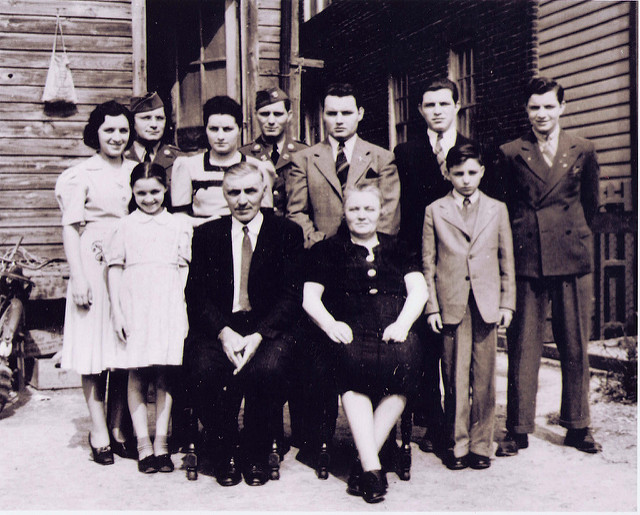 In Italy, as in many parts of the world, social structures and norms have changed dramatically over the last 50 years. The stereotype of the large Italian family is no longer true –and hasn’t been for quite a while, now– as Italy now has one of the lowest birth rates in the world. Traditionally large families were particularly common in the countryside and, in more recent decades, have become more associated with the South, rather than the North. Today, Italians hesitate to have children and most of the population’s growth is due to the large numbers of immigrants entering the country each year.

In the US, on the other hand, large families are still the norm, especially in the Midwest and in the Southern States, and the average number of children born to a woman is 2.01, against the 1.43 of Italy.

Italy, however, has still a very strong sense of extended family: in spite of low birth rates, families are still central and fundamental support to the younger generations. This relevance is not only and simply embodied by the parents and siblings, but also by grandparents, uncles and cousins, which contribute to the creation of a large and reliable family network.

Grandparents, uncles, aunts and cousins always played a more important role in the everyday life of Italians than in most parts of the US, and they still do.

Italians in their mid-thirties –and even more so those of older generations– have, very likely, been brought up by their grandparents as much as their parents, and many have for years considered cousins just as important as siblings.

Originally, this emotional closeness and reliance among generations was the result of both necessity and habit: in the past centuries and, to a certain extent, also in the 20th, up to the economic boom of the 1950s, Italy was a largely rural country, where several generations would cohabit in the same household, because of the necessity to keep everyone working in the fields. In this context, it was natural to share the care of children among the women of the house whether were they mothers, grandmothers or aunts.

To a certain extent, this union among generations, as well as branches of the same family, has been kept alive even after the 1950s’ economic boom took place: people may have moved to cities, and country dwellings may have been abandoned in large numbers, but members of the same family tended to live close to one another, therefore a similar type of support was still in place: grandparents kept their essential role as children guardians and, in spite of no longer sharing time, spaces and care, even today, in a day and age where one would imagine this type of relations to be surpassed and no longer relevant, Italians still strongly relies on family networks.

The main threat to this aspect of Italian family living has probably been mobility.

As of 20 years ago, it was unusual and, more often than not, not necessary to move far from home to get a good job and fulfill one’s professional expectations. Today, many young Italians are forced to leave the city and the area where they were born to achieve the same: occupation is lower and good jobs scarce, and a good chunk of Italian professionals have to move away from their families. They are now only able to see their families a couple of times a year and, as consequence, when they decide to start a family and have children, they lack the familiar supports their own parents –and their grandparents before that– had. Young couples entrust their children to crêches and baby sitters. Grandparents, uncles and aunts are far and the dream of a resisting Italian family, still united and old fashioned, in spite of the time inerorably passing, has begun to crumble.

Grandparents, uncles, aunts, and cousins always played an important role in the everyday life of Italians than in most parts of the United States.

In both countries the divorce rate is at an alarming percentage as divorce has become the norm. With the increase in divorce rates we have seen a change in the family landscape in both countries with families that are made up of single parents or various step parents and siblings.

The increasing number of working women has impacted family structures and gender roles. In Italy and the United States women are often juggling family roles with a career.

Society in general has become fast paced, something newer to Italy than the United States. This leads to less time spent together as a family and instead reserving meals for the few special days and holidays. Many are also finding that weddings and funerals are the most common times that extended families find themselves together. Other social unions such as gay marriage continue to be worked on in both countries. Italy has tried to regulate gay marriage while states in the U.S. have legalized marriage between spouses of the same gender in many states.

In a heavily religious country like the United States and in a country with firm roots in Catholicism these changes are often complicated to navigate.

What about the Italo-American family?

American families have a characteristic that Italians still have to achieve.

Because of the history itself of the US, many of its familiar nuclei are formed by people of different cultures and ethnicities. In a way, this cultural variety, which is quintessentially tied to the idea of American society, also involves Italy.

As one of the largest communities in the US, as well as one of the oldest and best established, Italo-Americans have often been characterized by their strong ties to the motherland’s traditions and customs. Even though decades may have passed since the first time a member of an Italo-American family has set foot on US soil, many have preserved old-fashioned interactions and ways of being, closely associated to how an Italian family may have been in the past. In a way, the first Italo-Americans, following a trend that is natural for all those that expatriate, became more Italians than the Italians themselves, and fought homesickness by keeping their memories and customs alive: this has worked incredibly well, to the point that today some Italo-American families may be seen as keeping that old, beautiful idea of Italian family alive better than we Italians do.

We’d like to conclude with a video, where the narrator, an American of Italian descent, lovingly describes his own family: in a way, the differences he finds and describes between his own family and those of his neighbors. His family could have been any Italian family of the early 20th century, a family that those of us who grew up with their grandparents may have still have the luck to experience, albeit briefly.

The world moves fast, today, but wouldn’t it be nice, to keep some of that unity, sense of belonging and inconditional love alive?

Would love to read those memoirs, Diana!

I cannot believe how everything on this video resonated with me! It was exactly like that! My parents are Italian-Italian, I am Italian-American and my children are American-Italian (only 1/2 Italian) but they love everything Italian, they love their nonna and we are continuing the traditions and food that my grandmothers and mother have taught us. I am writing my mom’s Biography because she has wonderful stories about the old country and moving to America and what that meant to her. Thank you.

Thanks Glauco: You have brought back a wonderful life I loved and lost. Yes it was so wonderful being brought up Italian. I am now 94 and would not want it any other way.