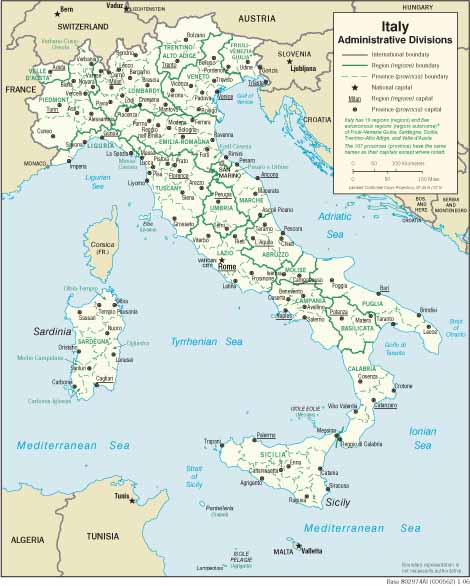 The Italian nation is made up of sixteen regions and four autonomous zones, each one unique in its own way. The Italian peninsula is also home to two microstates, Vatican City and San Marino.

Slowly, in a process known as the Risorgimento, these regions became incorporated into what would become the modern nation of Italy in 1861. The new nation adopted a tri-color flag of red, white and green based upon the French national flag, brought by Napoleon in 1797. Since the end of World War II Italy has been a republic known for its volatile nature – the nation has seen nearly 60 different governments dissolve in as many years. The Italian government has offices for both a President and Prime Minister, with the PM being the head of government. The voting age in Italy is 18, but the voting age for Senatorial elections is 25.

Today, over 58 million people call Italy home and it is the world’s fifth largest economy. Twenty-two percent of the Italian population is over 65 years old. The average family in Italy has 1.32 children. Italian life expectancy is 82.54 years. The average Italian worker can expect to make about $26,700 per year, with salaries almost double in Northern Italy. The Italian unemployment rate is roughly 10,5% but can be as high as 20% in the south, where farms outnumber factories. About 90 percent of Italians consider themselves Roman Catholic, however there are Protestant and Jewish communities as well as a growing Muslim population. Besides people of ethnic Italian ancestry, Italy also has populations of German, French and Slovene Italians in the north and a growing minority of people from Albania and the former Yugoslavia. These new arrivals as well as the French and German-speaking enclaves on the northern borders add even more color to an already colorful population.

The Italian peninsula has been occupied since the Neolithic era and in ancient times was home to numerous cultures such as the Latins, Samnites, Greek immigrants and the mysterious Etruscans. The ancient city of Rome was founded in 753 BC by Romulus and became the Roman Republic after the rule of seven kings. Rome became the greatest city in the world and the heart of its mighty empire, which would eventually collapse in 476 AD. With the loss of the Emperor, the Pope became a major figure in European politics and Italy became a hotly contested area, fought over by local warlords, the Papacy, Arab invaders and both the Byzantine and Holy Roman Emperors.

Medieval Italy saw nearly continuous power struggles and warfare, with powerful ruling families and city-states vying for supremacy. The richest and most powerful of these rulers such as the Medici family and the Vatican began commissioning great works of art, leading to the Renaissance. Also during this time Italian merchants brought to Europe exotic goods from the Near East, which led to modern banking as well as sailing knowledge that would help start the Age of Discovery. Famous Italian sailors and explorers include Marco Polo, Christopher Columbus, John Cabot (Giovanni Caboto), Amerigo Vespucci and Giovanni da Verrazano.

From the 16th to the late 19th centuries Italy was ruled over by various foreign powers, including the French and Spanish Bourbon Dynasties. Even the Republic of Venice, a powerhouse of trade and once master of the seas, was dissolved with the arrival of Napoleon. It was not until 1861 that the Kingdom of Italy was formed under Victor Emmanuel II of the House of Savoy with the help Count Cavour and Giuseppe Garibaldi. However it would take several more years before the entire peninsula would be unified as the Kingdom of Italy. By the 1920’s the King was powerless in the face of the Fascist dictatorship of Benito Mussolini and with the regime’s defeat in WWII, Italy dissolved the monarchy. In 1946 the Italian Republic was formed and two years later Italy adopted its new constitution.

During its tumultuous history, Italians continued to contribute numerous innovations in virtually every field. The modern Italian language, based upon the Latin of Ancient Rome was developed in the Tuscany region and has given great works ranging from The Divine Comedy to The Prince to Pinocchio. Italian innovators span the breadth of time, from Archimedes of Syracuse, to the incomparable Leonardo DaVinci, to Guglielmo Marconi and Enrico Fermi. Famous Italian inventions include the thermometer, barometer, piano, electric battery, nitroglycerin, eyeglasses, wireless telegraphy and arguably the telephone.

Major Italian crops include staples like wheat, rice and corn as well as grapes, potatoes, soybeans, olives and sugar beets. Italy also produces beef, pork and dairy products and Italy’s coastline produces all manner of fish and shellfish. The average Italian eats about a half pound of bread per day, 26 gallons of wine and sixty pounds of pasta per year.

The city of Naples gave birth to the modern Pizza, being the first to use tomatoes and Mozzarella di Bufala. The same area gave the world the first pasta served with tomato sauce. The Bay of Naples is home to rich volcanic soil thanks to Mt. Vesuvius, giving the famous San Marzano tomatoes their unmatchable flavor. To the outsider, Italian food may seem limited to pasta and pizza, but nothing could be further from the truth. Like its people, the food of Italy varies from region to region.

The food of Northern Italy is characterized by using more butter or lard than olive oil, with polenta and risotto being more common than pasta. When pasta is served, butter, cream or pesto sauces are used instead more often than tomatoes. Meat dishes feature more prominently in northern and central Italian cooking, but seafood is tremendously popular nationwide. Southern Italian food is more well-known outside of Italy and includes the famous Neapolitan pizza as well as numerous varieties of pasta served with a rich tomato sauce. The South is also known for the almost exclusive use of extra virgin olive oil and the unique use of herbs and spices such as cinnamon, nutmeg, wild fennel and mint.

Italian desserts can take the form of uncountable varieties of cookies and biscotti, fresh fruit tarts, pastries filled with zabaglione custard, mascarpone or ricotta sweetened with sugar. Of course there is always gelato, Italian ice cream bursting with flavor and granita, Italian ice. Even with all these tempting goodies, and of course excellent Italian chocolate, it seems most Italians are content with a simple but delicious piece of fresh fruit.