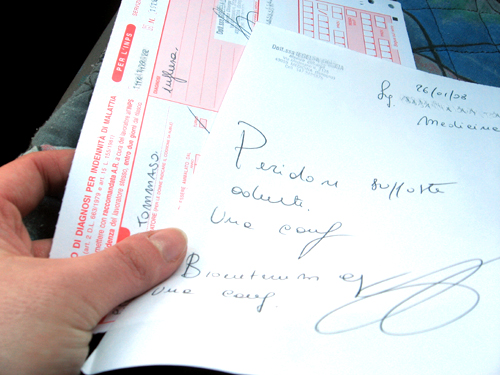 The Health Care System is a thorny subject in every country of the world: often tied dangerously to the political agendas of its creators, it is known to be one of those matters that could make a government capitulate.

In spite of being both wealthy, developed countries, Italy and the US have completely different approaches to health care. Italy has a public-based system, supported by tax income, as well as a flourishing private insurance market, which is often chosen by Italians as a sort of top up to the standard public “mutua”. In America, public coverage is limited to Medicare, and the private sector is the major provider of health coverage to citizens.

Far from being exhaustive, this brief article just wants to give you a general idea of what the main differences between the two systems are, without implying one is better than the other, but rather intends to offer the starting point for a wider discussion on a subject, which is very delicate indeed.

At first glance, moral and logical thought might suggest the Italian system is fairer and should be applied to the US as well, but there are issues also in those countries, such as Italy or the UK, where healthcare is considered an inalianable right of each and every citizen and is thus provided by the State.

In Italy, citizens and corporations pay around 50% income tax. Income tax is calculated, of course, on citizens’ income, but the weight of taxation in the country is among the heaviest in the whole of Europe. Italians are certainly not alone in having to pay so much taxes, but the problem is that, especially in recent years, it seems the quality of the services provided is not as good as it should be, and this is true also for healthcare. Hospitals are often understaffed, waiting lists can be very long, especially if one’s condition is not life threatening.

Another issue at stake in Italy is the quality of hospitals. In this, the country suffers from that North-South divide which characterize so much of its society. On average, hospitals in the Northern regions of Italy tend to be more efficient. Certain areas, in simple words, are luckier than other. The average is still good, in spite of this difference, especially when the quality of the Italian health system is compared to that of other European countries. It is undeniable, however, that national healthcare in the North tend to be more efficient and effective than in the South of Italy.

In Italy so, healthcare is free. This stands true in case of emergencies, but things are slightly more complicated if you need a specialist’s visit or in the case of prescription drugs. In these instances, many variables are at stake. These variables are usually income and the level of urgency or necessity of each specialist visit or medication. The latter, for instance, are devided in groups: the more essential is the medication to the life and well being of the person, the less it is paid. Life saving medications are usually free and most are in any case paid a fraction of their actual price.

In the case of specialist visits, the patient has the choice to either wait on for a free (or cheap) appointment on the public system, or pay for a private, quicker consultation. When choosing private, a fee is usually paid, but waiting lists are much shorter. As much as it may seem unfair, it is not as bad as it may be in other countries, because private visits do not cost as much as they do in other areas of Europe.

There is another consideration to make: a great deal of medical expenses are deductible or are cleared by the State on the basis of your income: if you earn more, you pay more. However this system, which is theoretically sound, has been considered by many Italians a bit of a State swindle: to the Italian government, any household earning in exceeds of 60 thousand USD a year is high earning. In Italy, as in the US, such income is far from being “high”, considering the life costs in this day and age, especially for an average family.

Problems, there are aplenty, but the good points of the Italian healthcare system should not be forgotten. Health expenses in Italy, even when going private, tend to be on average much lower than what other Europeans need to pay for private health services in their own countries. Our doctors are among the best trained in Europe and our hospitals are good. If it is true that many Italians today feel better with the safety net of a private health insurance that can, in case of necessity, cover where the public health system may not, going private in Italy is not quite yet a necessity.

Healthcare in the US

Recent data have shown that US health expenses are exponentially higher than in the rest of the world. This does not mean, however, at least according to data, that US citizens receive exponentially better healthcare. In other words, US citizens pay more for the same services.

Another issue comes from the fact that, because healthcare is largely privatized, US citizens may end up paying different amounts of money for a service depending on which type of insurance they have, whereas in most of the world, Italy included, the average cost of a procedure is very much the same for everyone. But why are healthcare prices so much higher in the US than anywhere else in the world? Some may think it is because US citizens are sicker than others,  and they use more healthcare services than other nations, but this is not the case. On the contrary, it seems Americans spend less time at the doctors’ than their Canadian neighbors or the Germans.

It has been concluded that the simple reason behind the higher pro capite expenditure on healthcare that characterizes the US comes down to the fact… services are priced higher. Medical expenses in the US are about two or more times as high as in European countries. This is due to a rather aggressive policy, typical of the US Health System, where doctors perform extensive tests all the time, as well as to the extremely high cost of doctor visits and medical procedures. Basically, since insurance companies pay directly, and patients who have insurance do not have to worry about payment, people do not look around for the best deal, but let the insurance companies cover the cost. This allows doctors and medical centers to present higher bills than average. Some states like Massachusetts actually cover a lot, and offer Medicare to many without insurance. Medicare at federal level is limited, but still works for certain socio-economical groups. Most companies provide health coverage, so employees usually get their insurance through their jobs.

There are issues, so.

We mentioned already the average US citizen spends much more than his/her Italian counterpart on healthcare each year, and things have not been getting better in recent years: in 2013, Americans spent 3.6% more than 2012 on healthcare, reaching a collective 2.9 trillion USD, or 9.255 USD pro capite. All in all, the cost of healthcare in the US (including both government and private expenses) equals 17.1% of the national GDB, compared to 9.1% in Italy. This, however, is not mirrored in a better healthcare system: life expectancy in Italy is 4 years higher than in the US (83 to 79) and the diffusion and care for specific pathologies is virtually the same in the two countries. Unbiased data like the death of women during childbirth (in the U.S. this is 16 for every 100,000 births and in Italy only 4 deaths for every 100,000), offer more indication on how lower expenses do not mean lower quality healthcare.

So why is healthcare more expensive in the US than in Italy, if there is no difference in the type of service citizens receive?

A series of reasons have, in fact, been identified as culprits. Doctors and nurses, for instance, are paid much higher salaries in the US than in Italy. However, Italian salaries of medical staff are far from fair, considering the responsibilities and the amount of hours usually worked: a pay rise, especially for those working in the public system wouldn’t be such an awful idea.

The price of medications, however, is a different pair of hands: in Italy, as discussed above, each medication is priced depending on its absolute necessity for the health and living of the patient, and on the income of the same. This means that, all in all, the majority of medications are paid a fraction of their full price. Nothing like this exists in the US, which means medications are paid more, by everyone.

Specialist procedures are also much more expensive in the US than in Italy (and, more in general, Europe). The same procedure can cost up to 10 times more in the US than Italy, but why, when the technologies, staff and infrastructures are virtually the same? And what about the rising amount of money spent on malpractice lawsuits? Is this a sign of lowering healthcare standards?

The Washington Post has recently published an eye-opening article on the topic, which well explains how much more the US healthcare system costs, when compared to the rest of the world: are things going to change any time soon? Obamacare has been at the centre of increasing debates since its inception and now, with new presidential elections approaching, the healthcare issue is bound to create more and more interest. But wouldn’t action be better than words? Shouldn’t the US government try to solve the issue at its root, rather than try to build upon a system which may be already fatally flawed?

On average, the north has better structures, but of course not everywhere. Cuts to the health system has certainly penalized the whole nation, but the South appear to have suffered particularly. This does not mean, Salvo, that the healthcare system in the South is not good. It is. Just that, as many people from the South can testify (I was having this very conversation with friend from Sicily, for instance), there may be areas in the South were the healthcare system is just not as efficient. This isn’t me stating it out of the blue, unfortunately. At the same time, there are incredible excellencies in the South, like the Cotugno in Naples, which has been working fantastically during the current Covid-19 epidemic.

Health care is better in the north than in the south ? In your dreams maybe . It’s defiantly not always the case .

the waiting lists in Italy however also go according to the priorities indicated by the general practitioner but from a maximum of 24/48 hours for emergencies (it changes from region to region, for example from me if the doctor prescribes you the urgency go directly to the hospital without booking while you are in emilia romagna you book and give you an appointment within 48 hours of booking) and arrive up to 180 days for specialist visits without priority (logically there are other times between these two bands) and in any case it has been stated that if you have an appointment beyond the maximum time indicated by the doctor (even if on the waiting list, however, they must give you the appointment I was the maximum preset by the urgency given by the doctor) you can go privately to the hospital and the cost difference from tiket to Private visit is charged to the health system