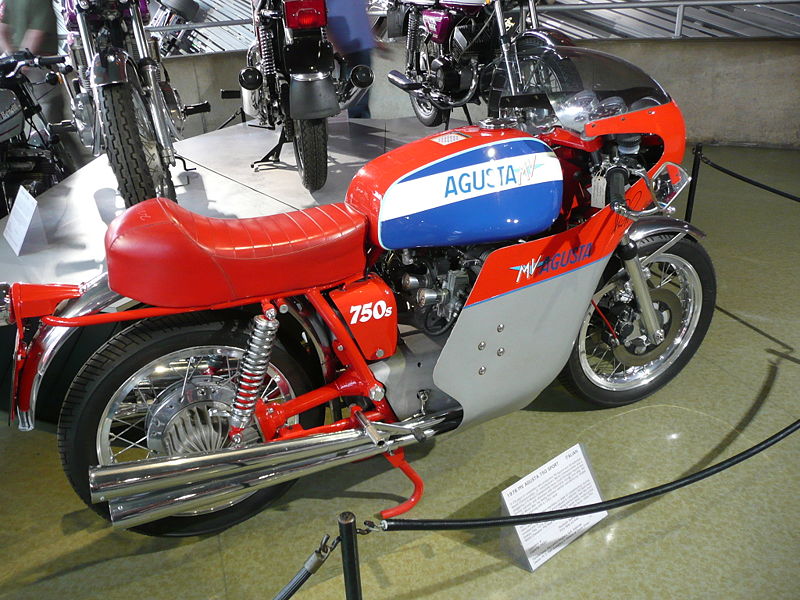 Continuing from MV Agusta Part I

Success on the road

Among the more important bikes of that era, you’d find the not-so-pretty MV Agusta 600 Four. It was a 600c.c. four-cylinder, air-cooled, four-stroke with shaft drive, but it looked nothing like the racing 500 Four. Many people actually thought it was quite striking, but those intimately familiar with the gorgeous championship-winning version – the 500 Four – found this roadster to be nothing special – it was not even close to being as quick or fast. And it did not sell very well.

A smaller model released around the same time, the 250 Biciclindrica twin, sold very well and helped make up for the cost of producing the larger bike. In those years, the company launched the MV Agusta 750S – an icon of sorts, but still not as good as it could have been. The company chose to keep the shaft drive from the 600, even though it never held up well to abuse. The great Arturo Magni, who worked with MV for 27 years, later created a chain conversion for this bike: it was a popular aftermarket item, and it worked very well. The 750S was a beautiful piece of work, even with these issues.

Another road-going model was derived from the 750S, the 750 Super Sport. It was speed in metal form. Each one of them was tested by Agostini and was sold with a certificate to prove this, but not many were made as they were incredibly expensive for their time and only exported to Germany and Australia.

All of this was not to last, though.

Sure, MV Agusta had some very notable riders, and they sold some amazingly beautiful motorcycles as well, but much of it was based on the passion of Count Domenico Agusta. In February of 1971, the Count died and left behind an incredible legacy to which all motorcycle manufacturers would have aspired. Soon after Domenico’s death, the Italian government took over MV Agusta: this was mostly due to the aviation side of the business as the Italian government loved to control their defense contractors directly.

Even though the driving force behind the company was now gone – and it was being run at least partially by the government – MV Agusta kept producing motorcycles and continued to race. In 1972 they produced another variation on the 750S, the 750 GT. It was not the best motorcycle ever produced, but since only 50 were ever made, it is now one of the most collectible. Shortly after this model, some American investors worked with the factory to produce the (790c.c.) 750 S America model. It was based largely on the GT and previous 750 models, but it had a bevy of factory options and many earlier problems were addressed with its release. This is another very collectible MV. Next came the very rare 832 Monza, a rather updated version of the 750 America, and some even believed that the Monza was created from America models still sitting at the factory – this was untrue, though.

This was the end of the first incarnation of MV Agusta, unfortunately.

The Cascina Costa manufacturer had fallen on hard times. Some of this was due to the lackluster quality of models being sold for the street – though that did improve a great deal over the various model versions – but most of it was due to bad management by the Italian government. After all, the Italian government was only concerned about the aviation industry – especially the helicopters. There were many expert builders who kept the name alive through their products. One of them was the well-known Arturo Magni, but there was also Hansen and Kay & Bold. The last employee retired from MV Agusta in 1980. he was the parts manager at the factory.

A great deal of racing went on with older MV Agusta motorcycles of all types – including a sidecar outfit – but the company was no longer in existence. This is when the Castiglioni family comes into the picture. Their company, called Cagiva, purchased the rights to the motorcycle brand from the Italian government in 1991. This was about 12 years from the time they purchased an old Harley-Davidson/Aermacchi plant in Varese and started to produce their own motorcycles. Fortunately for Cagiva and MV Agusta, by 1997, they had hired a legendary motorcycle designer, Massimo Tamburini.

He was already very well-known in the motorcycle industry for starting the Bimota motorcycle company (very high-end designs, using other manufacturer’s production engines) and having designed the iconic Ducati 916-996-998 series of race and street motorcycles. (His design was also used for the basis of the Ducati 1098/1198.) In 1997, they released their first road-going new MV Agusta.

This was to be the F4, a 750c.c. work of art which blew away the competition completely. It was praised for its engine, its design, its beauty, its pure power, it handling and just about everything the moto press could fit into a review of the machine. If you look at the first model to ship out of the MV Agusta factory in Varese, you would immediately discover what is often called ‘moto lust’. It became the dream bike of every lover of fast and beautiful motorcycles. It was the first motorcycle presented upon entering the Guggenheim Museum’s The Art of the Motorcycle exhibit – in fact, there were two of them. Truly, MV Agusta has created motorcycle art, and they adhere to that in every design they produce. You need to know that every single bolt, every single clamp, and every weld – all of it is inspected to make sure it looks right and performs properly. This attention to detail means that MV Agustas are some of the most reliable motorcycles to come out of Italy. The incredible passion for beauty and speed with which the company makes every motorcycle  is very evident,  even for the most casual observer.

Not too long after the F4 was released, Tamburini also started to design something else, something different in some ways, yet still full of the exotic beauty of the F4. It would be a ‘naked’ version of the bike – basically, it was the F4 without its plastic fairings. It was named the Brutale (‘brutal’ in Italian) and it too took the two-wheeled world by storm. The Brutale was equipped with the same radial-valve engine which powered the F4, but it was retuned to provide excellent low and mid-range power characteristics.

There were many variations on the theme of the F4 – all of them limited editions; F4 Serie Oro (‘gold version’), F4 SPR (Special Production Racing), F4 Senna (named after F1 racer Alton Senna) and more. This changed only slightly when the F4 was given a larger displacement (998c.c.) in 2004. From then it was called the F4-1000, and MV created similar special models based on this machine as they had done with the 750 model, including the F4-1000 Tamburini – obviously named after the designer and fitted with the top-of-the line motorcycle technology available at the time. In 2006, the most expensive motorcycle MV Agusta ever made was born: the F4CC.

CC stood for Claudio Castiglioni, the president/owner of MV Agusta/Cagiva. It was a highly modified motorcycle with carbon fiber and magnesium everything, and rated at 200 horsepower at the crank. Again, it was a true work of art. The Brutale received similar treatment to the F4 and there were many versions made of that bike as well. MV Agusta even made multiple displacement versions of both bikes; there was a Brutale 910 and 989, and there were F4 models with 1078c.c.

Most models of MV Agusta were sold worldwide, with the exception of some of the special editions, intended solely for certain markets. However, the brand has spanned the globe and is now known to almost every motorcyclist (except certain brand-loyal people who know nothing beyond their own world). In Japan, where the big four are from, resides one of the best aftermarket parts producers in the entire business, Moto Corse, who specializes in MV Agusta.

Cagiva has gone through many owners during this time, so it can be hard to keep track. Right now they are owned by Harley-Davidson, but that will change soon as MV Agusta is up for sale again. Even with this chaos, the company itself is still run by Claudio Castiglioni and his son, Giovanni. That helps to keep everything on an even course. The ownership of H-D, though, did allow them to bring out a new F4 and Brutale design.

In 2010, an updated version of the Brutale was proposed in two base models,  Brutale 990R and Brutale 1090RR. Shortly after the unveiling of the new Brutale, a new, highly anticipated F4 (~1000c.c.) was shown to the world. Both models had significant updates, though they retained the same organic structure of earlier bikes. Tamburini’s original design elements were still all over them, and they met with widespread acclaim from press and motorcycle lovers alike. The engine and associated systems, though, are heavily updated even if the same basic engine layout was retained. More horsepower and more torque, better frame construction, and modern updates to areas like lighting and electronics bring the MV Agusta products up to date with the rapidly advancing technology within the industry. The brand has loudly announced to the world that they are here to make the best motorcycle that can be made by MV Agusta. The latest addition to the company’s beauties are the longly anticipated F3 and the

From this rather abridged history of MV Agusta, you can already see that the company managed to survive some rather difficult times and certainly  had its durability tested. And, so far, it has been able to weather those rough seas and continue to produce something the motorcycling public drools over. We know them for their racing heritage, the wonderful people attached to the brand, and the motorcycles they manufacture.

Their motorcycles are the way we can most easily connect with the people behind the classic cog-wheel logo, so it is to the bike that we have looked to get an understanding of who makes up MV Agusta. And it is the bike we buy, ride and enjoy – the F4, the F3 or the Brutale. It is said that they seem to be imbued with a characteristic  usually only associated with human beings: they are passion in physical form. This is MV Agusta – the old and the new – in its heart and soul – PASSION.