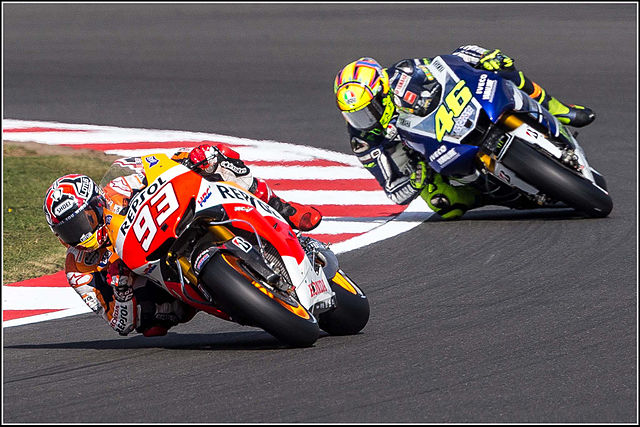 This week in Italy, we all became racing experts, ready to stand with or against one of our best known – and deservedly loved – sportmen, Valentino Rossi. In case you’re not into bikes, here’s a summing up of what happened.

Sunday morning, Sepang, Malaysia GP:  Rossi, very likely the best racer the Moto GP had in the past 20 years, is about to win his 10th title. His only true rival, the sole potentially still able to catch him up on top, is Spanish Jorge Lorenzo, his team mate at Yamaha. Rossi begins the race from the second row, behind Pedrosa and Marc Márquez, who runs for Honda. During the race, something strange happens: Márquez and Rossi come into contact somehow and Márquez falls, ending his race on the tar.

Rossi finishes up third, behind Pedrosa and Lorenzo.

Let’s return to the contact between Rossi and Márquez: the episode proved to be controversial even before the end of the race. Images, at least those shown on tv during the live screening of the event, show Rossi kicking his rival, who falls on the ground. This leaves many shocked, not only because of the type of gesture, but also because it comes from a racer, Rossi, known for his correctness and fair play.

Shortly after the end of the race, Moto GP officials decide to penalize Rossi officially, forcing him to begin the next competition, in Valencia, from the last row. Rossi, who’s fighting for the title against his own team mate Jorge Lorenzo (who, by the way, was quick to decide Rossi had misbehaved even before watching the video of the collision, and expressed his malcontent by giving Rossi a thumbs down during the prize giving ceremony) doesn’t take it well: the number of points between himself and Lorenzo is only 7 and starting the last race from the last line could easily mean loosing the title.

Rossi’s adamant he didn’t kick Márquez, but rather moved his leg off the motobike’s footboard because Márquez had just hit it with his head on purpose. That the two had been racing against each other with passion that day, it was plain to see, yet, nobody believed Valentino’s words, because most of the video shots of the moment clearly showed his leg hitting Márquez, but not Márquez hitting him.

“I won’t race in Valencia”

Moto GP fans immediately sided with or against Rossi, who is so demoralized and angry he decides not to run the Valencia GP, a decision which, thankfully, he was to recant a couple of days later. Those against him accused him of improper behavior towards a younger racer who, as an incise, had declared his respect and admiration for the Italian in more than one occasion. His supporters, though, believed he didn’t intentionally kicked Márquez and began campaigning to show their sympathy and support, to the point Rossi took to Twitter to thank them and confess it was especially thanks to his fans he eventually decided to race in Valencia.

Rossi’s fans may see their wish come true, because new footage, filmed from a different angle, shows that, in fact, Valentino was not lying: the images clearly see Márquez hitting Rossi’s leg with his head, before Rossi supposed kick. Of course, the fact the Spaniard may have been the one starting it all wouldn’t justify Rossi’s reaction, if he did react willingly. But this is not what he maintains. As we said, Rossi confirmed in more than one occasion that his “kick” was an automatic reaction to having been hit by his rival.

As of today, Rossi’s penalty hasn’t been removed, but people’s support is definitely all his, especially after video footage showed Márquez may have started it all. But if this is actually the case, why would that be? Some are convinced Márquez did it in the attempt to help his fellow Spaniard Lorenzo getting the title; others mentioned a purported rivalry between the two, which however appears unlikely, as Rossi and Márquez have always considered each other “good friends.”

In all this confusion and doubt, one thing is certain: we’ll all be watching the last Moto GP race in two weeks: if Valentino gets out of this, he’ll become even more of a national hero than he already is.