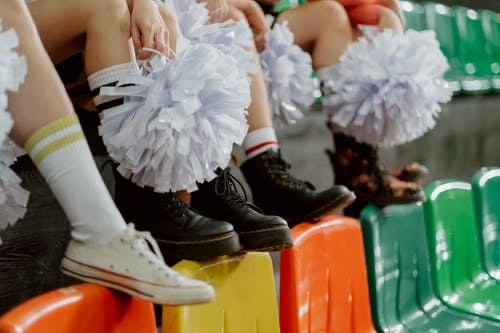 With the show Cheer premiering on Netflix, this sport is in the spotlight. And Italians are discovering it.

Cheerleading in Italy isn’t as popular as other spots such as soccer and, well, soccer. But the Italian teams have been succeeding worldwide, despite being in the shadow. But things seems to be changing. Slowly and surely.

Cheerleading in Italy, from shadow to light

First, it’s important to make a distinction between All Star and Sideline. While the latter is the athletic sport that supports a team, the former is the sport that stands on itself. The Cheerleading All Star doesn’t need a team to support because it is the team. In Italy, cheerleading is officially recognized by CONI (the Italian Olympics Committee).

The country’s team is called All Girl and it reached a record in 2016. In fact, during the Orlando World Championships, the athletes ranked 6th worldwide. An impressive result, since this sport is almost unknown in Italy. The International Cheer Union World Championships take place every year -and they will be held on September 2021.

In 2017, the Italian team participated once again to the international tournament. This time, with the words of the coach Ruben Squacciariniin mind: “We are going to show Italy that there isn’t only soccer.”

And they did, one year later, when the story of the Monza Cheer girls came to light. The school opened in 2017 and it was an immediate success. In fact, after only a few months of training, 11 girls made it to the Senior team to participate in the World Championship of Orlando. In the end, the national team ranked 9th -among the 77 countries participating.

The sister duo of the Monza team, Camilla and Carlotta Albanese, know why they love the sport.

“We wanted to practice a team sport and we have found ourselves in cheerleading,” they said, “it’s a discipline that requires commitment, dedication, and trust in your group. Because, when you jump, you have to know they won’t let you fall.”

Indeed, no one fell. Not during the 2019 Cheerleading World Championships in Takasaki, Japan. The tournament marked the 10th edition of the championship and it counted 130 teams from 31 countries. Guess what? Italy won its first ever Gold medals. Judges and viewers especially loved the Cheerleading Small Groups Mixed performance.

Unfortunately, Covid-19 stopped the 2020 edition of the tournament, but 2021 is the year of defending the title.

The Ice Cheerleader team of Sesto San Giovanni is the only European team to practice this sport. The initiative was born in 2016 as a passion project. In fact, no one has a salary, not even the President Antonella Fort. While the founder and captain of the Ice Cheerleader is Anna Balducci.

“The Milan-Cortina 2026 Winter Olympics are our big dream,” Balducci said, “we’d love to perform during the opening. And it could be the chance to establish a national federation.” Fingers crossed, indeed, for the world of cheerleading in Italy.

Is sport your passion? Make sure to check out the athletic archive of Life in Italy here!