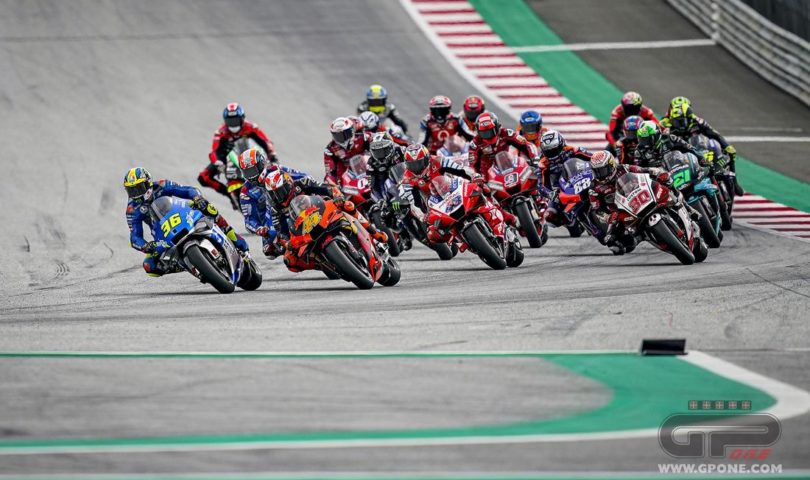 Intro to the sport

The official name is: Grand Prix motorcycle racing. The inaugural season took place in 1949 with the first title going to Lancaster Bomber pilot, Leslie Graham. It included four categories: 125cc, 250cc, 350cc, and 500cc bikes. For the next 25 years, Italian manufacturers dominated. Especially thanks to MV Agusta and Gilera.

By 1961, an innovation swept over the world of motorcycle racing. Indeed, it’s the two-stroke engine that produced 200bhp. The engineer behind this concept (Ernst Degner) joined the Suzuki team. Hence, the Japanese manufacturers starting working towards success. In fact, in 1966 Honda won the 500cc MotoGP. For the next decades, Japanese bikes dominated.

Then, a few changes happened. Including the arrival of Valentino Rossi. Furthermore, four-stroke engines replaced the two-stroke ones and the name MotoGP was born. That’s when the size of premier class MotoGP bikes increased to 990cc.

And this brings us to this year’s championship. And there’s tons of battles to fight.

The first race takes place on March, 28th, in Qatar. Here’s what you need to know.

Firstly, the eight-time world champion Marc Marquez won’t participate in the first two races. Last season, he had a serious accident and the doctors didn’t clear him for racing. Rider Stefan Bradl is supposed to be the substitute.

A big question mark is Andrea Dovizioso, who had a difficult divorce with Ducati. He’s expected to join the MotoGP 2021 later on in the season, onboard the Aprilia. And, finally, the Doctor. Despite the difficulties of the past, Valentino Rossi hasn’t given up on Yamaha. His 2021 motorcycle looks fast and Rossi is positive.

MotoGP, the races and results

This year, Life in Italy will follow the racing championship. Find out all the news and updates below. It’s time to have fun. We are also following the Formula 1 championship here.

Oliveira took the victory, this time. Followed by Zarco and Miller. However, it was a bad race for a lot of riders. In fact, after a 3-second penalty, Quartararo ended up sixth (when he had the lead). It was even a worse weekend for Rossi and Marquez, both victims of falls.

After the tragic death of Jason Dupasquier, the MotoGP ran to honor him. This time, Quartararo took the win, right in front of Oliveira, and Mir ended the podium. Valentino Rossi had a better race, since he ended 10th.

Another disappointing race for Rossi, who ended 11th. But another triumph for Ducati, with Miller and Zarco first and second. Quartararo ends the podium.

The Ducati triumphs! The first won to cross the finish line is Miller, followed by Bagnaia, another Ducati driver. Third on the podium, the Italian rider Morbidelli. Mark Marquez, at his second 2021 race, ends 9th. Meanwhile, another disappointing race for Valentino Rossi, 17th at the finish line.

This was the podium: Quartararo, Bagnaia, and Mir. Unfortunately, Rossi fell and he couldn’t end the race. But the big news is the return of Mark Marquez, absent for nine months due to an injury. The GP champion ended seventh, not at all a bad result.

Two Frenchmen on the podium: first Quartararo and second Zarco. Martin completes the top three. Another unlucky race for Valentino Rossi, who ended up 16th. Bagnaia ended the race 6th, the best among all Italian riders.

Vinales take the win onboard his Yamaha, while the two Ducati of Zarco and Bagnaia complete the podium. Rossi, unfortunately, only 12th.

We have to be partial to Ducati! 😉

After his 7th place last weekend, we bet he can only get better! Did you see him crying of joy when he got off the bike? Gorgeous!

I can’t wait to see Marc Marquez come back on the track !

I can’t wait to see Marc Marquez come back on the track !

MV Agusta and Gilera are the best Bikes in our days !

0
Life in Italy > Life & Style > Sport > MotoGP, The Latest News And Updates Of The 2021 Championship