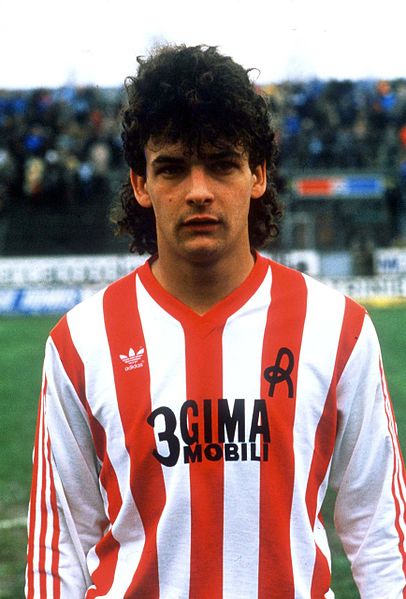 From Golden Ball to Pasadena’s Penalty – a career filled with goals, passion and class

Roberto Baggio, fifty years with a past full of great moves. Able to heat up spectators with his class like no one else in the history of Italian soccer – there’s only one Roberto Baggio, he turns 50 today (February 18, 2017) and he was born in Caldogno (Vicenza) Italy. Il Divin Codino (Italian for divine ponytail) has worn his fiftieth birthday suit this February 18th.

Ten years ago, in order to properly throw him a star’s birthday, as well as the respect for a retired soccer player of his caliber, Vicenza exaggerated portraying fireworks galore on the mid February sky of his native city. Robby is an idol to all Vicentini. In 2017 he decided to spend his birthday with the earthquake victims, in Amatrice and Norcia, one month after the Rigopiano tragedy (when an avalanche run over a hotel and killed 29 people).

He was primarily a soccer star, but his career filled with both satisfactions and disappointments (most unjustified) was significantly scraped, in the good and in the bad, by important events: from the magic Juventus years which led him to the 1993 Golden Ball – bringing him to world class success; to the dooming Pasadena penalty – the unfortunate miss in the World Cup kick from the eleventh meter fired back at the Italian Wonder.

“I have just one image I would like to cancel from my life – that penalty,” he said of the 1994 spot-kick miss that sealed Brazil’s victory in America.

Club teams, coaches and players always wanted Roberto Baggio, not to be confused with the other Baggio (Dino). Vicenza, Fiorentina, Juve, Milan, Bologna, Inter and Brescia had him, but remorse-free in the end they had always been keen in disposing of him. Two hundred and five goals in Serie A, twenty-seven in the National team, with these numbers the now fifty-year old retired champ wrote the history of Italian soccer.

Here are his 20 best goals:

Inimitable to be the center of attention of endless discussions, no other like him had been so much in the spot-light regarding placement in the field. Trequartista (Italian for deep-lying forward) or striker? This doubt had more often marked his career with contestable substitutions. Platini defined him as a ‘nine a half’.

Carletto Mazzone with no doubt on his mind classifies Robby as the reigning national champion, outclassing names like Meazza and Boniperti, and sitting short of Maradona, Pele and Cruyff.

“If his knees had been as strong as his superiority in the field he would have been the best in the world” said the retired coach who had him Brescia.

Baggio has won very little compared to his agonistic abilities: two scudetti (Juve and Milan), worn the national jersey in three World Cups – grazing victory in the 1994 Final in USA and obtaining third place in the Italian 1990 edition. Trapattoni refused his fourth presence in Japan.

“You’re not part of this team because you are not yet fit” said the current sporting director of Austrian Red Bull Salzburg during the 2002 selection for the Korean-Nipponese World Cup.

“But I was fine, I was cured and injury free – Mazzone would have put me in” Baggio’s reply.

Despite his good character, well manners and emotional availability there was always a way to erupt in situations where his mind had to be given – coaching disappointments included.

“If I’m not needed then I might as well leave” said to Lippi when he was in Inter. “He wanted to destroy me, but I didn’t let him” he added.

As well as comparing the ex azzuri coach’s ideals to those rigid and strict of an army camp. He also never liked his nicknames given by the fans, such as “divin codino” or “coniglio bagnato”.

Roberto Baggio’s popularity has now, purposely, fallen in anonymous status. He was the soccer legend everyone always loved to talk about. His amazing moves, his grace and his goals are becoming a memory of a type of soccer where believing a man carrying the whole team is not pure fantasy. Roberto Baggio back then did more. He made Italians think he carried the whole game.

“I have to think hard on what to do next. It’s a tough issue and a mistake could prove very, very costly.” Il Divin Codino hasn’t yet forgotten about soccer, because evidently soccer hasn’t forgotten about him.

Hi, lovely article about my all time favorite football player. I’d like to finally meet him. My son’s birthday is also on Feb 18th…Do you know how and where to get in contact with Baggio or his management? Thank you.