In the central Parioli district in the midst of the bustling city of Rome but away from all the chaos and the noise of busy city life where the only noise you will hear are the stomping of heavy horse’s hooves and the distant ‘clacks’ of wooden mallets hitting a tiny ball in a wide open field, you’ll witness the beautiful elegance of the game of polo taking place. 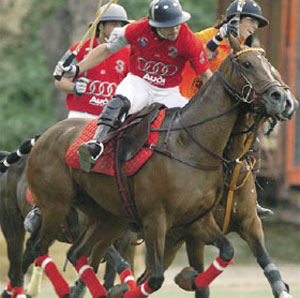 The location being described is the Rome Polo Club, home to regular polo games and events not far from the Vatican and the Colosseum where the passion for a game not so widely spread in Italy is a pastime of Rome’s more affluent and prestigious society. The frequent gathering of professional polo players and its spectators where various games and tournaments take place is also, much to our delight, open to the public. The Rome Polo Club was founded in 1930. It is the oldest polo club in Italy, open to the public when tournaments are being held. People interested are welcome to go and watch.

To become a member of the Polo Club, it is quite difficult as new members are usually descendants of members however it is possible to become a member providing you are a proficient polo player. A written request is needed and two members of the Polo Club have to grant you worthy of joining. Enrolment fee is 15,000 Euros plus annual fee of 1,000 Euros. The Rome Polo Club also shares its grounds with the Pony Club where lessons are available on a regular basis and is also very children-friendly so young hopefuls can aspire to become successful in the glamour and elegance which is the ‘Polo world’. Prices are affordable and people interested are welcome to ring and inquire according to their needs.

The climate in Rome is a good place for a game of polo with its low annual rainfall, however games usually take place in the late afternoon as the temperature gradually drops and horses can thrive in the warm but pleasurable climate of a pitch shrouded in late golden afternoon sun.

The game of polo started in Italy in 1915 on the Island of Brioni. Polo became a huge scene in Puntala, Tuscany in the late ’60s ’til the late ’80s. Top Italian polo players were Pasquini and Guglielmi who played in the ’50s and ’60s. The game died down a bit in the following years but picked up again recently and blossomed with new tournaments and events.

In this exciting fast-paced game, becoming increasingly popular throughout Italy its glamour continues to intrigue and inspire the growing number of spectators due to the pure excitement evoked from watching the 2500 year old game. Just imagine seeing players on thoroughbred horses bumping and jostling with each other while having to strike a small ball with a mallet which requires the precision of an experienced golfer. The first time spectator will be impressed by the speed and athletic abilities of the horse and the rider. It is a spectacular show of skill.

The object of the game is to score as many goals as possible. There are 4 players on each team which assume a specific position either offensive or defensive. However the enormous size of the playing field required for the momentum of the galloping horses and the ball’s unexpected changes of direction, means positions continuously change. There are six periods (known as chukkers) in a usual match, a chukker lasts seven minutes, however in Italian polo there are usually only four chukkers in match. Due to the extreme speed at which the horse gallops and the demands put upon it, players must change mounts after each period. Therefore, a team usually has a minimum of 24 horses available.

The horses that take part in the games are all thoroughbred, beautifully groomed and tended-to to make their performance optimum. Leg wraps protect the lower legs of the horse, which is referred to as a polo ‘pony’. The horses mane is usually shorn and its tail is plaited, scooped up to make it shorter and held together usually by three white or yellow bands. All these rituals enhance the speed and safety of the horse and add to the aesthetic beauty of the game. The players wear the famous polo shirts named one to four in the specific team’s colour, special white trousers that are usually worn in tournaments and the hard hats and goggles. Spectators are elegantly dressed as polo is also considered a social event and get together. There isn’t as much a dress code in Italy as there is in England but spectators still always dress up for the occasion.

The Audi Gold Cup in Rome, an interesting annual event used to be held at the Rome Polo Club. This particular Roman polo tournament participated by the veteran members of the club was seen to be somewhat of a past time to enjoy amongst friends more than a serious event but played with the same passion of a world championship. Audi (hence the name of the tournament), The Westin Excelsior, Jaegar-LeCoutre and other prestigious name brands sponsored the six teams as they battled away for this much desired Roman Polo cup. Every year many tournaments are held at the Roma Polo Club, both national and international.

Rome and Sardinia (in the near future) are classed as the polo capitals of Italy. Rome, due to its connection with the Rome Polo Club which is the largest and oldest polo organisation in Italy. Sardinia is an up and coming place to play and see polo matches, new pitches are being bought there and with the help of very powerful businessmen it will be a big polo scene in the future. Tom Barrack, an important businessman, polo patron and good friend of Simone Chiarella owns a great amount of properties on the island of Sardinia. Barrack is doing all in his power to bring his beloved sport to what is known as his “beloved island” he ordered all his staff to support his idea as much as they could. The Costa Smeralda Gold Cup took place over a period of time (July/August) in 2010 . Simone Chiarella invited Tom Barrack to play in the tournament, he didn’t hesitate to come.

An outstanding player with somewhat of an advantage to the other players, Praxilla Trabattoni is the only female member of Italian polo and an asset to her team. She lead the Jaeger LeCoutre team in the Roman Audi Gold Cup a few years ago and has been present in many an Italian tournament. A lawyer and a single Mum, Praxilla always makes time for the sport she loves the most. It’s the fear and audacity required that give her the sheer drive and passion to play. Praxilla Trabattoni talks about her involvement in polo, “Polo was always a family passion. My mother used to play. I started playing polo when I was eight years old in Argentina. Polo is Argentina’s national sport, like football is for the Italians. I then moved to England where I continued to play. To this day I still play polo in Italy and all over the world.”

Simone Chiarella captain of the Italian international polo team and patron of his ever successful ‘Black Polo’ team has ridden horses most of his life. He’s been playing polo for about a decade now. A big name in Italy’s polo scene he is determined to see Italy become better known for its success in the game. He comments, “For the first time Italy won the European championships in August 2005, a first for Italy in the history of Italian polo, beating renowned teams such as England I was very proud to have captained the team. The same team lead by myself will be preparing for the not too distant world championships in Mexico City at the end of July/August 2007.” As far as Italian polo is concerned, Chiarella goes on to say, “Polo is a difficult sport to play in Italy as apposed to other countries such as England or the United States where polo is quite highly developed and practiced from an early age. Italy lacks the infrastructure and there are also very few young players.” (Chiarella was arrested in 2010 accused of bankruptcy).

This doesn’t mean the Italians aren’t as crazy about the sport as their British counterparts, as with anything, Italians and their passion for a sport they love is a lethal combination nearly always resulting in success!

Hello my name is Bernardo Bravo professional polo player handicup 3 from Argentina, also have a lot of expirience as polo mannager and polo instructor. I am looking for a job attaches you Will find my cv with all my expirience and recomendación letters.
Regards
BERNARDO BRAVO