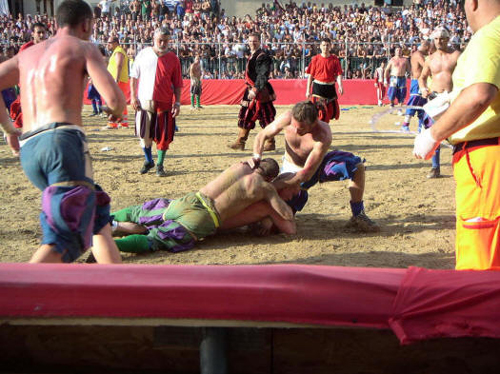 Historical Soccer and Reenactment from Florence

The “Calcio Storico Fiorentino“, “Historical soccer from Florence“, called in old Florence “Calcio in Livrea” was born in Florence around 1200-1300 AD.

It was one of the many competitions between the local noblemen. We have to remember that in this crazy period murders, death, and and violence was a normal occurence.

Kings came up with violent sports for enjoyment and to calm the population. It all goes back to the fight in the arena between Gladiators at the Roman times. There are many examples in Italy of violent sports, as well as all around the world. In central America games like “the Pelota”, which was played between Mayans, was very violent and often the captain of the losing team was killed.

The Calcio storico is the father of the modern soccer, American football and rugby, when in the time of 1540 Caterina de Medici went to live in Paris, and took with her many traditions from Italy.

The story goes that she took with her a personal cook that taught the French the Florentine style of cooking. She also brought to France the “Calcio in Livrea“, Livrea in old Italian means “Costume”. The English saw this strange game while it was played in France and brought the game to their region as well. This then in turn brought about Ireland “soccer”, which was more similar to “Calcio in Costume” rather than modern soccer, and Rugby came to be. From rugby came American football. This game brought from Italy was the precursor of modern soccer.

Playing games with a ball wasn’t a new thing. The Greeks played a game with a ball called “Sferomachia” and the Romans had a game that used a ball (filled with leather and rags), but was very violent. It was quite similar to the “Calcio in Costume” called “Ludos Harpastum”. Ludos translated means play, and Harpastum means take off with violence [strappare con forza] from Latinum.

The Harpastum was the game for rough people like the legionary were, as this game was played on sand which gave agility, power, and pride to the Romans. The Harpastum probably arrived in Florence with the first legionary that founded the town, and became one of the games played for many centuries. Today is called “Historical Soccer”.

The tournament between the four disctricts of the town (Azzurri from Santa Croce, Bianchi from Santo Spirito, Rossi from Santa Maria Novella and Verdi from San Giovanni),  is played in Florence every year, in the month of June, and the final match is on the 24th, when Florence celebrates St. John the Baptist, its Patron Saint.

The first written rules go back to the 14th century:

Cut in the center by a white line, the 2 shortest sides have a big net that reaches to each side. The net is 1 meter high. For each team there are:

At the center of the net of each team there is a captain where he stays and enters in the game only to plaque his players and give directions to them.

The game starts when the “Pallaio” kicks the ball in the field and the shot of “Colubrina” a little cannon, to cherish the game. At this time every player tries to catch the ball and put it in the opposite net to score a “Caccia” or point. At first the ball rests on field because the players fight in a wild boxing match one against each other, trying to put or pin down as many players possible; once there are enough incapacitated players, the other teammates come and swoop up the ball and head to the goal.

In the field, the player carrying the ball and defended by his other teammates would try to bring the ball and score a “caccia” or point, and it is very important to make a goal in the net because if you miss it, or the defender steals it, you give up half of a “caccia” to the other team. Sometimes it happens that the winning team doesn’t score any point. The winner is the team that have the most points. It’s possible finish 4 and half to 3.

The winner is awarded a white cow or “chianina”, famous in Italy for its Fiorentina, a t-bone steak typical from Florence.

VIP Players in the Centuries