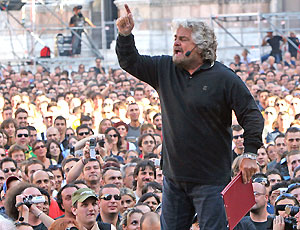 Beppe Grillo is one of the most recognized and probably most talented Italian stand up comedian. For almost 40 years he has entertained the Italian public through every media, and some of his most memorable performances entered the history of Italian popular culture. Grillo represents the classical satirical actor: hedgy, often attacking the system, an attitude that led him to slowly transfer from comedy to politics, becoming a very important blogger and ideologist of a political movement.Old school comedy lovers remember Grillo in two memorable TV shows: “Te la do io l’America!” and “Te lo do io il Brasile!”, which he hosted in the 1980’s, where he presented hilariously his views and anedoctes of the two countries, after having visited them personally. With lightness and class, Grillo was able to describe these two countries, without inhibitions, but also creating a cultural product that is still very effective.

Grillo continued, throughout his career, to perform as a guest in some of the most important shows of Italian television, like “Fantastico” or the “Festival di Sanremo”. It was, indeed, at Sanremo he presented a ten minutes long monologue made up of insults and attacks against the government of the time. That particular performance cost him a long exile from TV, but laid the ground for what he does today. Since then, he showed a tendency to disrespect the current powers, with valid points to support his jokes that with time became very strong and direct shots at the political world.

Meanwhile, Grillo never disregarded commercial work and, as a matter of fact he was for many years the spokesperson of a very famous Italian yogurt. The marriage with that particular brand was so strong and powerful that in one legendary spot, Grillo stared in silence at the camera, forcing the people to buy the yogurt, without any image of it, or logos. Up to today that is considered one of the most successful commercial ever created.

Of course cinema could not ignore Grillo and despite his crazy and unorthodox approach to comedy, his acting performances were brilliant, concrete and very deep, and so were the films. He made only three movies: “Cercasi Gesu”(Jesus Wanted), “Scemo di Guerra”(The War Idiot) and “Topo Galileo” (Galileo the Mouse). “Cercasi Gesu” dealt with the difficult times of Italian terrorism of the red brigades. “Scemo di Guerra” was a marvelous piece on the Italians fighting the African war and “Topo Galileo” was all about lab experimenting, featuring an astonishing Jerry Hall. After that, Grillo decided to stop his film career to focus only on stand up comedy.

The truth is that Grillo had television and theatre in his blood and, as a smart businessman, he knew that was the way to go to make good profits.

But this was before the internet entered the scene: the internet changed Grillo’s image dramatically, giving him tools to connect with the public and spread his message unthinkable up to few years earlier. He fully understood the power of the new media and in no time, he created the number one blog in Italy, ninth in the world. An amazing result in terms of followers. Many claim his only aim is profit, while others accuse him of embracing populistic opinions in order to gain following. Despite the critics, who in fact probably helped his popularity, Grillo gained power and recognition, and his blog became a true social and political movement. His Movimento 5 Stelle is now in Parliament.

Although ideally powerful, Grillo’s political work appears to be lacking concrete solutions to concrete problems, and therefore many question his credibility. Younger generations seem to appreciate his views and support him all over the country. Getting so deeply involved with politics may well make it impossible for him to go back to acting and performing, although his act continues in different ways and with very different methods.