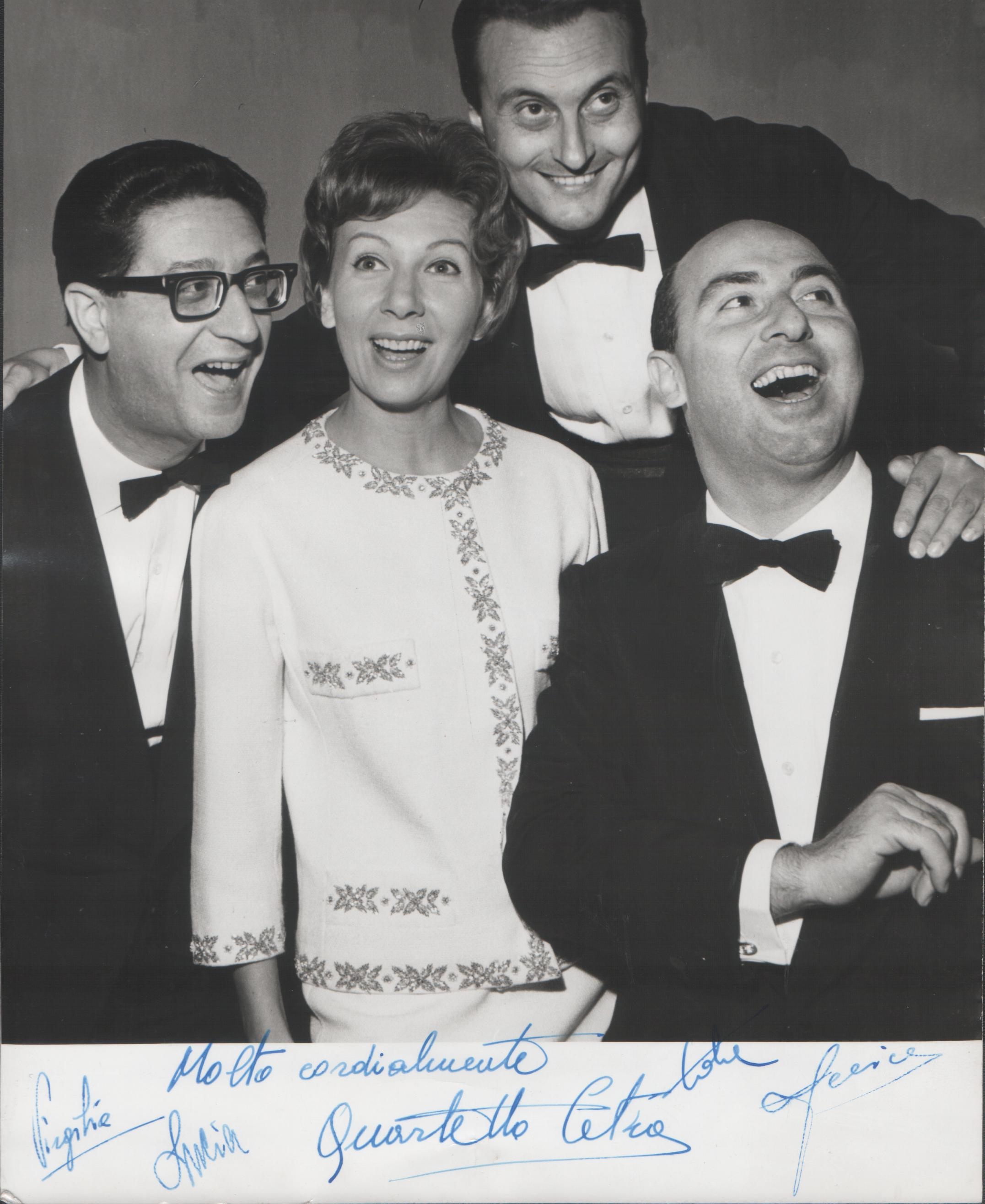 Some suggestions about the best of Italian music

Known to his fans as “Il Reuccio,” the little king, Claudio Villa was indeed the king of Italian melodic music. His voice, full, powerful and reminiscent of that of operetta tenors, has enchanted generations of Italians. His name has been always associated to the Festival di Sanremo, and to the old-times-Italy of Bel Canto. Villa, almost 30 years after his death, still remains an icon of Italian music.

If Claudio Villa was the unconstrasted king of Italian popular music, Nilla Pizzi was rightly its queen. Class 1919, Nilla was the first winner of the Festival di Sanremo, when the musical kermesse was only still a radio show. Her career started before the Second World War and lasted very much until Nilla left this world, in 2011. Her powerful, rich voice remained unchanged in spite of time passing, as her last appearance at the Festival di Sanremo, in 2010, demostrated: she was the guest of honor and entered the stage beautifully dressed, charming as ever. She only needed to sing the refrain of Vola Colomba, one of her best known successes, to show to all the singers and starlets of today what a true diva and a true artist really looks and sounds like.

Active since the 1940s, the Quartetto Cetra was formed by three men, Felice Chiusano, Giovanni “Tata” Giacobetti and Antonio Virgilio Savona, and a woman, Lucia Mannucci. They were known for their catchy, carefree songs, which so much helped to keep the mood of each and every Italian high after the tragedies and horrors of the Second World War. In the first few years of its career, the Quartetto had only male members, but it was when Lucia, who was also Savona’s wife, joined in 1947, tha the band reached its full popularity.

Born in Genoa in 1940, Fabrizio de André is without a doubt one of the most significative artists Italy has ever produced. Talented musician, amazing poet, De André well embodied the ideal of Italian songwriting and brought to a level not many have reached after him. He had a passion for French poetry and music, much of which he translated and elaborated into Italian. Even after his death, in 1999, De André has remained one of the most popular and loved among Italian artists. His lyrics truly reach the level, in many occasions, of the best of poetry.

Not many, today, are familiar with Luigi Tenco.  Born near Acqui, in Piemonte, in 1938, he was one of the main representatives of what was to be known as the Scuola di Genova of Italian cantautori, of which De André was also a member. Blessed with the dark good looks of the beautiful and damned à la James Dean, Tenco loved jazz and lent his voice to touching songs about human feelings and loneliness, even though he did not dislike to delve into social topics. Linked romantically to another icon of French and Italian music, Dalida, their destiny remained intertwined in the tragedy surrounding their death: Tenco killed himself in 1967, Dalida, who never stopped to consider him the love of his life, took her own life 20 years later, in 1987.

Battiato is Italy’s music philosopher, not only because of the content of his work, but also in name of his decades-long collaboration with the Italian philosopher Mario Sgalambro. Sicilian, Battiato mirrors often in his music the beauty and contraddictions of his land. His lyrics are hermetic and not necessarily simple to understand, his sound often groundbreaking. In the 1990s, when his album L’Imboscata came out, in many asked him to which lucky woman its first single, the beautiful love song La Cura, was dedicated to. He answered La Cura was not about this world’s love. It was the love song of God to Man. Interpret it as you wish, La Cura remains one of the most touching Italian songs of the past 30 years.

Get to know him with: Centro di Gravità Permanente, Bandiera Bianca, E ti Vengo a Cercare, La Cura, Cucuruccucù, Shock in my Town.

Renato Zero is the only Italian artist who managed to have a number one album in each decade since the 1970s and he is as big today as he was at the beginning of his flamboyant career. Born in Rome in 1950, Zero embodied, in the 1970s, a type of “clean” transgression, embraced by a country which only then had begun to face matters such as sexual freedom and homosexuality. Every Italian remembers his costumes and over-the-top, histrionic performances of those years, but eventually learned to appreciate his later, more mature work, which demonstrated the artist had extensive talent as a writer and musician. His fans, whom he always called “sorcini,” little rats, are known to be among the most faithful and supportive in the whole country.

Talking about Mina means talking about the most diva-like artist Italy has ever had. So iconic, so famous has she been for the past 5 decades that, in spite of not having appeared in public since 1978, she still is a household name. Her voice has been by many defined as that of a dramatic soprano, even though she never had formal singing training. In the 1960s and 1970s, those of her largest popularity, MIna was not only a singer, but also a tv star, as she often presented or co-presented popular tv shows on national tv, RAI.

After her “retirement” from the stage, Mina continued to produce amazing music.

Extremely famous is her 1990s collaboration with Adriano Celentano, another icon of Italian music, with whom she recorded a very successful album. An interesting trivia: the music of one of her best known successes, Se Telefonando, is the work of famed international composer Ennio Morricone.

Lucio Battisti could have been easily a member of the “cantautori” section of this article, as he was a talented lyricist, as well as a musician. Born in 1943, Battisti’s work represents to many the very essence of what Italian pop music is. His songs are universally known by at least three generations of Italians. Famed was his collaboration with lyricist Mogol, with whom he penned some of his best successes.

Gifted with a particularly voice timbre recognizable among thousands, and a profound interpretative sensibility, Battisti is – and rightly so – considered one of the most representative Italian singer-songwriters of all times. He died in 1998.

Born Domenica Rita Adriana Berté, and known as Mimì, Mia Martini is considered one of the most beautiful voices of Italian music. Her timbre – sombre, hoarse, yet incredibly expressive – made her interpretations unique and somehow always tormented. Tormented, in fact, as her own life: Mia Martini suffered a big deal, also professionally. She had, in the late 1970s, serious medical problems at her vocal cords, which required surgical intervention. For more than a year, Mia could not sing and getting back into the swing of things was not simple, yet she managed with a series of Festival di Sanremo’s successes and incredible collaborations with other known artists.

She died, in mysterious circumstances, in 1995.

Check the second part of Best Italian Music, where you will get to know the famosissimi (the super famous!) of Italian pop music and the kings and queens of Italy’s alternative music.