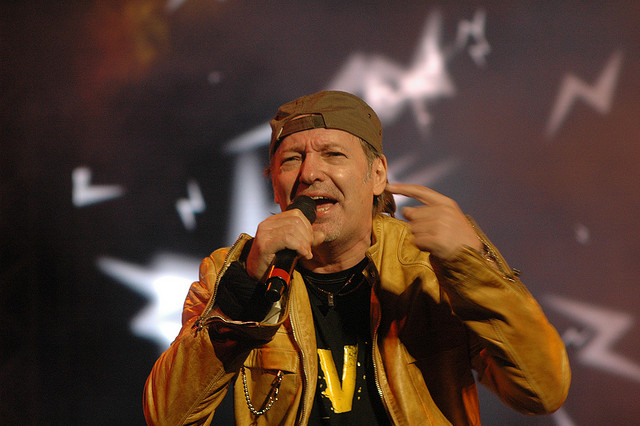 More Suggestions about our best performers and songwriters

Il Blasco (as it is known among his fans) is a bit of an Italian phenomenon. When non-Italian friends of mine heard his music, they were left at best untouched: when compared to American rockers, Vasco may look and sound more like a theatrical imitation than anything else, but don’t be fooled, the man has talent.  He remains one of the most popular Italian singers and he is literally adored by his fans. He’s been high riding the charts since the early 1980s and some of his tunes remain among the best example of Italian pop-rock music around.

Get to know him with:  Albachiara, Vita Spericolata, Senza Parole, C’è chi Dice no, Gli Angeli.

Albeit his career started a bunch of years later, Ligabue (Il Liga, as he’s known to his fans) is as much of a crowd-pleasing rocker as Vasco is.  If his cowboy look (much tamer today than it used to be) may not be everyone’s cup of tea, it must be admitted that good old Luciano did pen some very good songs. Il Liga shares its origins with Il Blasco, as they come from the same area of Italy, Emilia Romagna; however, lovely Emilia is much more of a feature in Ligabue’s music and lyrics, where references to its people, food, wines and traditions appear quite often.

Eros barely needs introductions and if you’re not familiar with his career and music you can check out our Eros Ramazzotti feature article. What makes Eros so different from many, just as talented, musicians and singers, is that he’s not only big in Italy, but also abroad: Spain, Germany, South America and the US, Eros has conquered the world with his blend of catchyness, poetry and creativity. His very distinctive voice may have also helped: his timbre is unmistakable.

In many ways, Laura Pausini‘s career resembles that of Eros Ramazzotti: launched at a very young age by the Festival di Sanremo, Laura is probably, along with Eros himself, the best loved singer in Italy at the moment. She also shares with Ramazzotti an enormous international success, something not many Italian singers and songwriters can say about themselves. Laura has invested time and effort into singing in Spanish and English and the international public seems to have paid her back.

Compared to the other “famosissimi” in this list, Tiziano Ferro has had a much shorter career. Born in 1980, he enters the homes of the Italian public at the beginning of the years 2000 with the album “Rosso Relativo.” It’s the beginning of an enormous success, which brings him also abroad: he sings in Spanish, English, French and Portuguese, too.

Subsonica came to the spotlight in 2000, when the band participated to Sanremo with hugely popular “Tutti i Miei Sbagli,” but its story had started much earlier. Officially, the band was created in the Summer of 1996, but its members had been known on the indie music scene of Turin, their city, for quite a while. Subsonica have been performing and creating together for 15 years and are still going pretty strong. Their mix of rock and electronic music is well supported by Samuel Romano’s beautiful voice. Worthy to follow are also some of the many side projects Subsonica’s members have been carrying on, above all the indie dance group Motel Connection.

Litfiba, from Firenze, have been around since the beginning of the 1980s and they have never really gone out of fashion. Lead by charismatic duo Piero Pelù and Ghigo Renzulli, the band is known for its brand of visionary rock, made of heavy guitars and ethnic influences. To alternative rock purists, Litfiba’ s best production is that of the first 10 years of their career, up to 1993’s “Terremoto;” their successive albums, however, may be more palatable for pop music fans. Either way, Litfiba are unanimously considered a piece of Italian alternative music’s history.

Fedez,  short for Federico Leonardo Lucia, is currently the best known representant of rap music in Italy.  His career started in 2011, when he recorded his first album, “Penisola che non c’è.” Appreciated by the younger public, Fedez’ style has been criticized by rap purists in more than one occasion. The young Milanese didn’t let negative feedback affect him too much: his last album “Pop-Hoolista” has won two Platinum Records so far. Fedez has also been a judge on Italy’s “X Factor” eight edition.

The Piedmontese band has been around since the mid-1990s and has always mentioned American music icons Sonic Youth as their first inspiration when they began palying music. Their first two albums, “Catartica” (1994) and “Il Vile” (1996) are probably their best, especially if you are into proper indie rock. Since then, the band has mellowed down a little, yet managed to maintain the right edge to still be counted among the best alternative music bands in the country. Marlene Kuntz have some of the best lyrics around from a linguistic point of view: lead singer Cristiano Godano is an extremely talented writer.