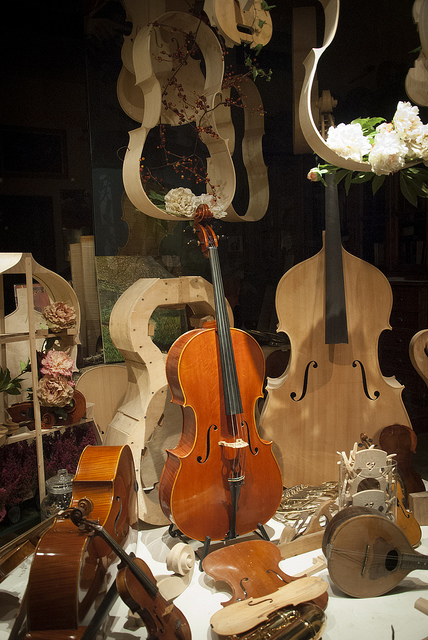 Just two fiddles in a case. That’s how an old friend described the rare Cremonese violins he had just seen on their way from one recital to another. Together, they are worth in the low 8 figures, so I can’t help wondering what their maker, Guarneri del Gesù, a solitary, ailing man who produced relatively few instruments, would have made of the market’s enthusiasm for his work.

It seems to me he might well have been astonished his violins survived at all, through the changes of musical taste and circumstances of the centuries, and somehow disappointed he did not live long enough to reap the financial reward of his work.

Many old violins, violas and violoncellos did perish in accidents or were neglected. Many more survived, and are, centuries later, still working for a living (many more survive than could have been made then, but that is another story…).

On the other hand, the more lightly constructed guitars, lutes, recorders, and flutes made in the thousands by Guarneri’s contemporaries survived in smaller numbers and today are far more likely to be seen in a museum, rather than heard in the hands of a star player.

Baroque plucked and blown instruments make their way into the concert hall frequently enough, but only by way of modern copies, while in the chamber orchestra I play in, Tafelmusik, there are only two modern copies of Baroque instruments among the 14 string players: the rest of the players use original pieces which,  thanks to modern restoration techniques, have been successfully restored.

The seasoning of time, however, does not do for guitars what it does for violins, violas, ‘cellos, and basses.

Some say a guitar becomes less loud and less responsive after 80 years of use, while the violins of Guarneri, Stradivari, Amati, and those of other Italian makers, are especially sought afters by players, and have been for more than 300 years. While some of Stradivari’s guitars have come down to us, we know their sound only from modern copies. In truth, I have not been able to find a cogent explanation why motions of a string played by a rosined bow should be kinder to the wood of an instrument than the plectra, or the fingernails of a guitarist. Or why recorder players find their favorite instrument, ancient or modern, is ‘played out’ after twenty years or so.

Some suggest 400 years may be the limit for bowed stringed instruments: this means we may now begin to experience the decline of the first built among these baroque beauties, those made  by Maggini and Andrea Amati.

17th and 18th century luthiers  – yes, violin makers were and are still called lute makers – made bowed string instruments out of materials from the world directly around them. The sounding boards were uniformly made of spruce; backs and ribs from locally grown maple of various kinds. The pieces were held together with hide glue: this cousin of Jell-O, made of rendered animal parts, is still used by makers today. Hide glue has virtues which have kept it from being superseded by modern glues.

A join made with such glue is reversible, while the user, depending on the application, can make up the glue itself in varying strengths. This is important, because for all the genius of the luthier of the Baroque Era, the construction of stringed instruments of that time routinely breaks a basic rule of woodworking, that of avoiding cross-grain construction. Perhaps, in the days before central heating, the cross-grain joins in these instruments were less tried by changes in humidity and temperature than they are today. In any case, keeping the strength of the glue low helps ensure that, if the wood needs to move in response to changes in humidity, it is the glue in the join, rather than the wood, to give way.

Sometimes larvae of the beetle anobium species lived in the bodies of stringed instruments, creating worm galleries in instruments that were stored for long times in damp places. The close cousins to the violin family, the violas da gamba, and violas d’amore suffered damage from these larvae much more often than the violin family did.

Once the instrument’s body was made, it needed varnish for protection. So little of the original varnish remains on the old instruments I know myself, that the interest in it seems to me to rest on a very small foundation, but much ink has been spilled over the issue. So mundane is the source of most of the other ingredients of bowed string instruments that I wonder if the varnish might not have been bought from the local pharmacy.

Whatever the source, people have wondered for ages what the ingredients were and what contribution varnish makes to the overall tone of the instrument.

Once the body of the instrument was done, strings, made of the twisted inner intestines of sheep, were stretched over them.

Wire strings, brass and steel, might have been used, and in some cases gut strings were wound, or over-spun, with very fine wire. But, despite the drawbacks of animal based strings, chiefly their instability due to humidity, listeners appreciated the warmth of their tone. To set the strings vibrating the player uses a bow, one of the few wooden parts that came from the New World rather than from local forests. Different kinds of bows have been made and used over the centuries. A number of woods were tried, among them ebony (also used for parts getting the most wear, like pegs, fingerboards, and tailpieces), snakewood, (which was also used for walking sticks), bannia, and finally pernambuco. This yellow to reddish-purple wood has been the standard for pre-modern and modern bows for 200 years.

Originally used for making dye (shavings make a deep purple color), pernambuco was found to have the right balance of weight and stiffness. Even though really fine pernambuco is rare today, the best for bows is extremely strong with a weight/density just slightly greater than water…it sinks. Whatever the kind of wood and the model of the bow its function is to hold  the horsehair and keep it in tension while it is drawn over strings.

Boiled down pinesap, called rosin, was rubbed on horsehair, which was held taut by the stick of the bow. Without rosin on the horsehair, no sound comes out of the finest violin, but in 25 years I have hardly heard anything or read anything about rosin. Essential, but not subject to any kind of substantial change.

I mention all the bits and pieces that go into using a violin to make musical sound, because every element changes the musical equation, some a great deal, some very little. For example, when one of my colleagues is trying a new bow, and I walk into the rehearsal area where s/he is warming up, I recognize who is playing, but know immediately something is different.

The violins of famous Italian makers like Stradivari, Amati and Guarneri are as famous as the “Mona Lisa”, “War and Peace”, “The Marriage of Figaro.” Made of simple common ingredients – wood, hair, gut, and sap – they continue to thrive in a world of computers and biotechnology.

The secret of their longevity may be in their simplicity, and adaptability: they can be many different things to different players, while the lutes and recorders could not. With gut strings and a low-tension set-up the Cremonese violins excel in the chamber music of the 18th century (Editor’s note: The Traditional Violin Craftmanship of Cremona is now a Unesco Intangible Heritage) . With a tourte bow, modern synthetic strings and a player to match, they can provide the basis for a lush Hollywood film score.

Violins have made their way into Egyptian and Indian music, and in redesigned forms they are in all kinds of commercial music. In most of these cases there are modern additions to the musical equation: the kind of bow, the kind of string, and certainly the musical imagination of the player.

But the body of the violin remains largely unchanged, even if the maker would have been hard pressed to recognize its sound: we can really say that the Old Italian violin is a musical chameleon.