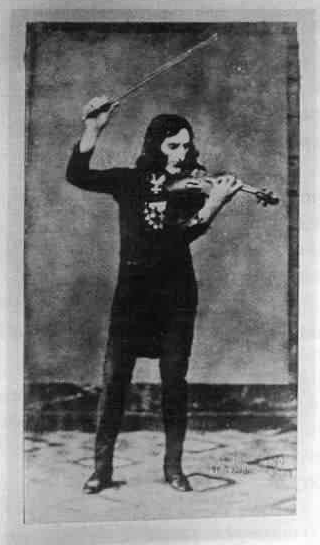 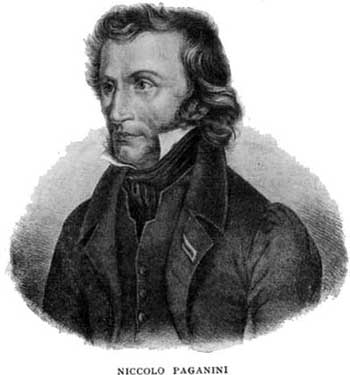 Niccolò Paganini was an Italian composer and virtuoso violinist who many still consider to be the greatest violinist that ever lived.

His radical and brilliant innovations in violin technique are still heralded to this day; and his 24 Caprices are considered some of the most difficult music ever composed – only a handful of violinists at any period of time ever reach the heights of technique and musical ability required to play them. Although Paganini displayed a fearsome level of virtuosity that surpassed everyone else’s, he didn’t restrict himself to running fast scales and sweeping wide-interval arpeggios constantly. He also played the most tender and the most lyrical passages that charmed audiences so much they would openly weep and even swoon upon hearing him.

Born October 27,1782 in Genoa, Niccolò Paganini began playing the violin at the age of seven under the instruction of his father, Antonio Paganini (although Niccolò had previously started on the mandolin at age five). By the time he was twelve, he had already given his first public violin concert, but he went on to study under various teachers, such as Giovanni Servetto, and he quickly surpassed each of his teacher’s abilities.

Once, at age 13, Niccolò was taken to see the famous violinist Alessandro Rolla, but after hearing the young man play, Rolla responded that he had nothing to teach the boy. Still filled with determination to be the best violinist who ever lived, Paganini embarked on a course of self-study and a harsh practice regimen in which he would play up to 15 hours a day. Later, at the age of 23, when he wasn’t touring, Paganini acted as music director to Elisa Baciocchi, Princess of Lucca, who was Napoleon’s sister.

In 1828, Paganini went on a tour of Europe that lasted for six and a half straight years. He toured mainly as a solo performer, and was the first of his kind not to travel with back up musicians. He would go from town to town playing unaccompanied on his violin. On his European tour he gave thrilling performances throughout Poland, Germany, Vienna, Bohemia, Paris, and London. Everywhere he went, audiences were astounded and claimed they had never heard anything like his playing. His final journey through Scotland and England ended up making him a rich man.

When Paganini’s reputation began to spread throughout Europe, some people started referring to him as “Hexensohn“, which means ‘Witch’s brat‘. They claimed that Paganini was in league with Lucifer for being able to play so well,  suggesting he had made a deal with the Devil to be able to perform his almost supernatural displays of technique. Paganini loved the rumor and went out of his way to cultivate a dark persona after hearing it.

He would dress all in black and occasionally arrive at his concerts in a black carriage pulled by four black horses. His physique was always quite emaciated and pale, which contributed even more to his “demonic” appearance. Whenever he performed, Paganini’s thin body would sway back and forth eerily on the stage, and his eyes would look white from them having rolled up inside of his head.  With his long, wild hair swaying to and fro, he embodied the perfect image of the damned artist.

Also, in 1828, he lost his teeth which gave his face a sunken, ghost-like appearance. But these macabre qualities ended up working much to Paganini’s advantage: his unusual appearance and the rumors of his supernatural abilities and the talk of his deal with the Devil only caused more people to be intrigued with him and they flocked to his concerts. In a way, he could be considered the first rock star. A German poet, Boerne, once described a Paganini concert thus: “It was a heavenly and diabolical enthusiasm, I have never seen or heard its like in my life.”

But Niccolò had a difficult time coping with his wealth and fame. He developed a drinking and gambling problem by the time he reached the age of 16. At one point, he was taken in by an unknown woman who gave him sanctuary and helped cure his problems. He stayed with her a total of three years, practicing his violin and even taking up the guitar seriously, becoming a virtuoso on that instrument as well, and composing 200 pieces for it.

Paganini is credited with bringing about radical modern violin techniques, and his innovations in this area border on the miraculous. In 1829, the German violinist Guhr documented all the technical innovations Paganini had developed, most of them unheard of at the time:

He also never relied on sheet music during his performances: he wouldn’t take a music stand on stage with him, preferring to memorize every line he played, which was very rare for a musician at the time. He was the first performer ever to incorporate this extensive memorization into his concerts, and audiences were amazed that someone could manage to recall an entire program of music. He was also quite secretive about his solos, never playing them fully at rehearsals, but instead saving them for the performance.

Paganini’s main instrument was the Cannone Guarnerius violin made by the great Italian luthier, Giuseppe Antonio Guarnieri. Paganini gave the name “Cannon” to the model because of its explosive sound which reminded him of that particular weapon. He came to use Guarnerius violins as a result of his gambling addiction: he once lost a highly valuable Amati violin at the betting tables, and an amateur violinist allowed him to use his own Guarnieri violin. After that, Paganini played them exclusively.

He is thought to have suffered from various ailments that actually increased his technical abilities. Ehlers-Danlos is a genetic disorder that causes hyper-mobility in the joints because of a collagen synthesis defect. This is said to have allowed Paganini’s joints to be so flexible that he could play up to three octaves across the fret board without ever shifting the position of his hand. He also had very long limbs and fingers, which is a condition thought to be due to Marfan syndrome, a disorder of the connective tissue.

On May 27, 1840, Paganini died in Nice, at the age of 58, from cancer of the larynx. During his life he composed 24 caprices, a series of sonatas, and six violin concertos. At his death, his Cannone Guarnerius violin was given to the city of Genoa, where it is still housed in the Palazzo Tursi Museum.

Every year in Genoa, the “Paganini Competition” is held, and anyone under 34 years of age from any nation may participate. The winner of the contest is allowed to play one of Paganini’s original violins and also receives a recording contract.

And now we’ll end with a famous quote by Paganini: “I am not handsome, but when women hear me play, they come crawling to my feet”.