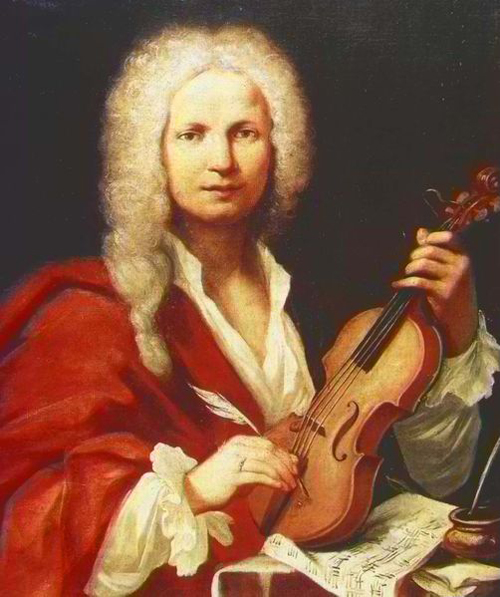 The composer and violinist  Antonio Vivaldi is mostly known for his beautiful Four Seasons, inspired by the scenery around Mantova. However, he was an extremely prolific composer and he led such an intriguing life even Hollywood produced a movie about it.

Born on the 4th of  March 1678, in the very cultured and musical city of Venice, young Antonio was quickly baptized on the very day of his birth, as he was considered frail and at risk of death. Health weakness was to be a constant for the musician, who suffered from respiratory problems throughout his life. With today’s medical knowledge, specialists came to believe he may have suffered from asthma.

Vivaldi’s father, Gianbattista,  was one of the best violinists in the city and a popular performer in San Marco’s Basilica. He was the one introducing young Antonio to the violin and to the highly musical atmosphere of his native city, Venice. However, sons of upper-class Venetian families were often sent into the priesthood and Vivaldi was no exception.

He became an acolyte in 1696 and a priest in 1703, nine and a half years after he began. The ‘red-haired priest’ as he was nicknamed because of his startling red hair, gave up saying Holy Mass fairly quickly after that. His health may have been behind such a decision: faible and tired, Vivaldi barely managed to move around because of his chest conditions, let alone take upon the responsibilities of a parish. And anyway, although Vivaldi was a devout Catholic, who kept a rosary with him while he composed, his heart was really in his music, which he much preferred to a career in the Church.

Always in 1703 Vivaldi began to teach violin at the orphanage of the Ospedale della Pietà, one of the four orphanages for abandoned or orphaned girls in Venice. The Ospedale della Pietà was especially famous for creating talented musicians, and their concerts were particularly popular. Here he composed concertos and cantatas for the girls. All of them could sing and most played a musical instrument. The young composer gained a high reputation, but fell out with the Board who governed the orphanage and eventually lost his position in 1709.

However, he was recalled by unanimous vote in 1711.

He became the maestro de’ concerti of the orphanage in 1716,  but this wasn’t enough for Vivaldi: he wanted to travel and write operas. He began to work for the Sant’ Angelo theater in Venice as its manager. His first break came here with L’Estro Armonico (Opus 3), which means  musical inspiration, a series of twelve lovely concertos for violin. He wrote several theatre operas, the first of which was Ottone in Villa.

Vivaldi traveled for fourteen years, and worked for such distinguished people as the governor of Mantua and even the Pope, who invited the composer to play for him twice. He was accompanied in his travels by a singer from the orphanage called Anna Giraud, who reputedly was a better actress than a singer. As the composer was a priest, this caused a great scandal: Cardinal Ruffo was especially upset by the gossip and forbade the musician to be ‘artistically active’ in Ferrara. Vivaldi was also suspected of having an affair with Anna’s sister, Paolina, who moved in with him and Anna.

Unfortunately the great composer died poor – his fame had waned in Italy and he led a profligate lifestyle. As it happens for many artists, his wonderful music was rediscovered only after his death.