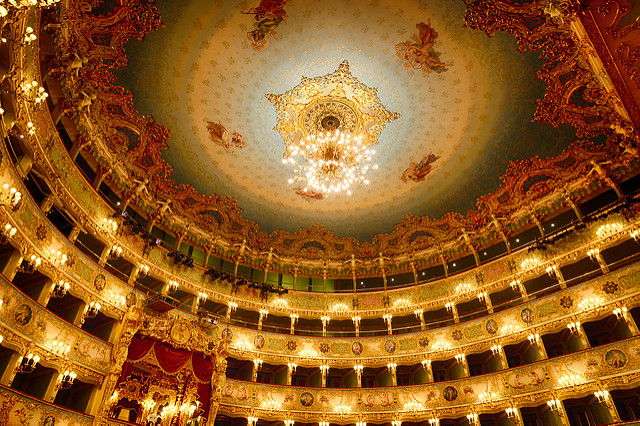 From North to South, Italy is home to many incredible Opera Houses.

This theater, located in beautiful Venice, was built at the end of the 18th century and – as befits its name – was burned down and rebuilt… twice in the 19th century. Then, it was destroyed once again by fire in 1996. This event was front page news, and engendered a major international effort to rebuild. Many celebrities led such efforts: American filmmaker Woody Allen was one of the most active.

This new theater has been criticized by many for its style, which some say doesn’t match the city; the location is considered not the best.

The most important event hosted here is the New Year’s concert that usually attracts some of the best musicians in the world.

Located in Milan, right next to the Galleria, this theater is probably the most important opera house in the world, a true temple of classical music. It was founded in 1776 to replace a theater that had burned down.

The theater opened in 1778 and the original layout was very different from today’s, as the main floor was actually dedicated to dancing. After World War II, La Scala began its golden age, strongly linked to the historical performances of Greek singer icon Maria Callas, anticipating other legendary performers such as Luciano Pavarotti and talented orchestra directors like Riccardo Muti.

The theater has been through several remodeling and restylings, and the last one, dated just a few years ago (2002-2004) caused much criticism, as many felt that the soul of La Scala was actually betrayed. But in reality, the space was renovated with style and taste; the few things that were changed were done to enhance the musical experience. At the moment, the theater has a capacity of a little over 2000 seats. The season opening is one of the most celebrated social events in Milan and highly reported by the media.

As we continue or journey through Italy’s Opera houses, let’s go down to Naples.

This is one of the most important opera houses in Europe. It is the oldest existent opera house, circa 1737, and can host almost 1000 more people than La Scala. This theater had some very famous directors; two who are worth mentioning, Gioacchino Rossini and Gaetano Donzinetti, are true icons of Italian music. The problem is that this theater has experienced strong censorship in comparison to other cities, even tougher than in Rome, home of the Vatican. This environment has created a great deal of friction with important composers, and especially with Giuseppe Verdi.

The theater is built right next to the royal palace and connected to it, to allow the royals to access the theater from the inside, avoiding having to travel in bad weather or through masses of people.

Since its foundation, the San Carlo has always kept its standards high, and in the mid 1940s the theatre initiated a new trend in Italy: its orchestra tours the world, including the United States. This increased the theater’s reputation and has given prestige to Italy in general.

Last but not least, it is important to mention the relevance of ballet at the San Carlo. It has an academy and allows dancers to grow within the theater. This makes the  San Carlo one of the foremost ballet schools in the world.

Further south, in another major and beautiful former capital of the Borbone Kingdom, we find the third largest opera house in Europe. Palermo is a great city, and this theater honors it at its best. The building is an architectural beauty and it features a dome on its top.

For film lovers, this theater was featured in Coppola’s Godfather Part III, during the final dramatic showdown of the entire trilogy.

The acoustics are of the finest and the interior is a masterpiece, refined to the last detail, and very luxurious. Of particular interest is the ceiling that is made out of special panels, which move, creating a perfect airflow in a unique system to avoid uncomfortable and noisy air conditioning systems.

Let’s stay in the south a little longer and in Bari. Apulia to be precise.

This theater is actually privately owned, unlike other Italian opera houses that are usually owned by the cities. This makes the Petruzzelli the largest private opera house in Europe. However, this theater has a common denominator with many others: it too was hit by a major fire that nearly destroyed it. The fire occurred at the beginning of the 1990s, but the theater has been rebuilt and is now fully functional and has been named an historical, national monument.

A number of well-known names have performed here; Americans might remember that one of Frank Sinatra‘s last performances was here, and the theater has hosted Ray Charles and Liza Minnelli, among many others.

Now let’s move north to Parma where the Teatro Regio (Royal Theater) dominates the central area. This theater has an interesting history; it was originally called Teatro Ducale, and was kept open by a popular referendum in the late 1800s while all the other theaters in Italy were closing for financial reasons. It had a special relationship with Verdi, who lived nearby, and since 2004 has hosted an annual “Festival Verdi” each October.

In Turin, the former capital of Italy, we find the Teatro Regio di Torino. It was built in 1740 and it attracted audience members internationally. Napoleon was often a spectator during his Italian campaigns, and it has always been a gathering spot for the most influential people of Europe. As seems to be the fate of theaters in Italy, it was destroyed by a fire in 1936 and for four decades lay idle. However, since it was rebuilt in 1973 the Teatro Regio has been delivering important operas, right up there with its Italian counterparts.

In all honesty this theater is not really special when compared to what other Italian cities feature. Built in 1880, it will probably never be remembered to be to a focal point in the life of Rome, as much as La Scala is in Milan, because even if it is the official opera house of the capital, Rome itself offers some strong valid alternatives like the modern auditorium and the fabulous set at Caracalla’s, which actually since 1937 became the summer home for the Teatro dell’ Opera, virtually featuring outdoors what the theater would have offered indoor. That site hosted in 1990 the very first concert of the three tenors Pavarotti, Domingo and Carreras initiating a series of concerts that would have touched the entire world.

Anyway, this theater still deserves some major credit, as it honorably carried on in the decades, considering the competition of its surroundings. One name above all should be linked to this opera house, and that would Pietro Mascagni, who directed the theatre and premiered here his masterpiece “Cavalleria Rusticana”.

A final note should go to the ballet that here always found  great respect and performers.

We saved the best for last. Right in the heart of Verona we can visit the Arena, also called the “Colosseo di Verona” because of its resemrance to the Roman monument, was built by the Romans and is still very functional. This is not exactly a traditional opera house, but due to its historical value and to the fact that it often hosts operas, we should definitely spend a few words on it.

The Arena had not been used as a theatre until the time of Napoleon, in the early 1800, when it began to be considered an important monument worth to be restored.

All of this led to 1923 when the “Aida” by Giuseppe Verdi was performed there, making the Arena the official largest outdoor opera house in the world. Today’s’ capacity is indeed of around 25,000 seats.

The Arena during the summer months is simply astonishing and it equally hosts rock events, as well as operas. A perfect combination of modern and old, ancient and young.