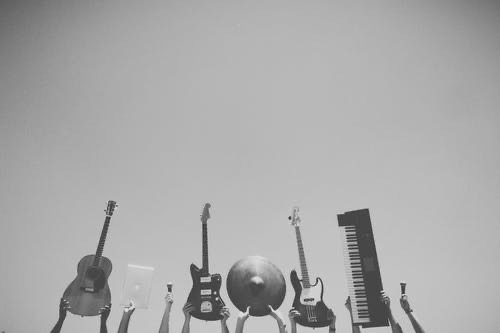 At the end of the Second World War the Allies troops occupied  Italy. American and English soldiers stormed through the country bringing. They brought all the things Italian people hadn’t been allowed to have for twenty years. Enter, Italian music in the 50s.

Finally, Italy was enjoying freedom. Even if money was tight and the war had left terrible scars, people were free after twenty long years of dictatorship. Italians wanted to sing, dance, and have fun. And they wanted to do it at the rhythm of the musical trends from across the Atlantic Ocean.

From 1945 onwards, Italian popular music’s history got inextricably intertwined with American and English ones. But it didn’t forget completely his musical heritage. Opera and classical regional music, namely the Neapolitan Song, which represented the tradition of melody and bel canto (beautiful singing), still had a very strong impact on Italian popular music of the 1950’s and 1960’s.

Foreign influences and native styles blended together in a mix that sometimes originated peculiar and unique musical phenomenons. Not only single musicians or bands, but also a figure which became, and still is, a distinctive feature of Italian popular music. Italian music in the 50s launched the Cantautore, aka singer and songwriter.

The origins of Sanremo

On of the most important event in the history of Italian pop is the creation in 1951 of the Festival della canzone italiana (generally referred to as Festival di San Remo or as Sanremo Music Festival. Every year, the town of San remo (La Spezia) hosts the festival at the Ariston Theater. It become so famous in Europe that it even inspired the Eurovision Song Contest.

Sanremo Music Festival is still running nowadays, tho most critics consider it too mainstream and traditional. Still, it’s an important appointment for both musicians and families.

The first festivals were broadcast on the Italian national radio channel, where Italian music in the 50s happened. However, in 1955, the contest was showcased on TV.

The rules of the competition

The changes to the rules of Sanremo changed with the generations and the technology innovations. The Italian music of the 50s focused on composing. From 1953 to 1971, each song was played twice, with two different arrangements. Furthermore, different bands or singers played the same song. Usually, one version by one Italian artists, while the second by an international guest. Foreign musicians captured the attention of Italian audiences, helping the development of national musical tastes.

In more recent years the number of contestants has increased constantly and the festival has merely become a very popular TV show, rather than a song contest. Nevertheless, it has launched the careers of many Italian singers famous allover the world, such as Andrea Bocelli, Eros Ramazzotti, Laura Pausini.

The 1950’s for Italy were a decade of reconstruction, economic growth and opening to the world. This openness reflected on the Italian music in the 50s. The music became more syncopated, rhythmic and openly influenced by swing and jazz.

Italian musicians of the time were all extremely opened to foreign influences, but there’s a  prominent and someway unique figure in Italian music history. This singer tried to fuse American musical rhythms with Italian tradition. But he also tried bringing American imaginary to the Italian audience. Like the style of gangsters and mobs, or “Guys and Dolls.”

Ferdinando Buscaglione, later known as Fred, was born in Turin in 1921. His parents enrolled him in the Conservatorio (music school) when he was only eleven. He became a violinist, but his real passion was jazz. So he started playing with swing orchestras and, during the first post-war years, his name boomed. It reached the charts of the top European jazz violinists, joining names like Stephane Grappelli and Joe Venuti.

However, his breakthrough happened with the Italian music, in the 50s. Thanks to the help of his friend Leo Chiosso, Buscaglione found his own music. He started composing his music, while Chiosso wrote the lyrics. He even began his own band.

The repertoire combined delicious hard boiler set of theatrics and great lyrics. It brought to life a musical universe which was an Italian-style parody of Peter Cheyney novels and Eddie Constantine films. Tracks such as “Che bambola!” (1956), “Whisky facile”(1957), “Eri piccola” (1958), all featured unlikely and humorous versions of Chicago or New York gangsters. The songs portrayed the thousands of “tough guys” of the Hollywood flicks, ruthless with their enemies yet sensitive to feminine charm.

The success of his music, and above all of his character, was immediate and amazing, he was soon overwhelmed with adverts and movie offers, but a tragic death took him away. Right at the height of his career. Ironically, Fred Buscaglione died just like one of his tough guys would. He sent his pink Thunderbird crashing against a truck in a Roman street, drenched in alcohol and full of regret for his broken marriage.

The heritage of Fred Buscaglione

His musical style was pretty unique and it turned out to be a very strong influence on future generations, way beyond Italian music in the 50s.

Modern and contemporary Italian musicians claim to admire Buscaglione’s sense of humor, his daring mix of different musical styles and his brilliant idea of inventing a new persona. When he played on stage, he became someone else, someone who wasn’t rigid and stiff,.

There is another musician who represents Italian music in the 50s. Perhaps you’ve heard of him. Or of his famous song, “Nel blu dipinto di blu” (aka “Volare”). Yes, it’s Domenico Modugno.

Modugno’s style was a mix between tradition and innovation. His songs were melodic, but also open to new rhythms and full of a contagious energy. His favorite topics? Love and passion.

When he was 19, Modugno moved to Turin to work and, later, he moved to Rome. In the capital, he gained a scholarship to attend the Centro sperimentale di cinematografia, a prestigious Italian cinema school.

At the beginning of his career, his music had Southern Italian influences. He followed the tradition of Italian music in the 50s. Some of these songs include “Lu pisci spada” (the swordfish) and “La donna riccia” (curly woman). In the 1950’s, Modugno composed and sang in southern Italian dialects, mainly Sicilian and Neapolitan. The titles included “Lazzarella”, “Strada ‘nfosa” and “Resta cu’mme”.

His real big hit was “Volare,” which he presented at the 1958 Sanremo. From a regional singer, he became an international star.

One year later, he won the contest with the song “Piove.” Modugno took inspiration from a scene he saw at Pittsburg’s train station. During a rainy autumn morning, he saw a couple saying goodbye, an intense and beautiful moment.

Modugno being an extremely prolific artist, his triumphs continued along the 1960’s: he won Sanremo once again in ’62 with “Addio, addio” and in ’66 with “Dio, come ti amo”, and Naples music contest in ’64 with “Tu si’ ‘na cosa grande”.

He reached the peak of his singer- songwriter career in ’68 with “Meraviglioso”, another hit. A song of timeless charm, so much so that has been recently covered by the Italian band Negramaro.

In 1984, a stroke hit Modugno. He had to stop performing and he decided to go into politics. In 1968, Modugno joined the Radical Party in 1986 and the Parliament. He died of heart failure in his home in 1994.

Meet another success of Italian music in the 50s. It’s the vocal quartet, Quartetto Cetra. They represented the tradition of vocal ensembles. A tradition that was disappearing.

The vocal group was formed by Tata Giacobetti, Felice Chiusano, Virgilio Savona, and Lucia Mannucci. The concept was based on an idea by the Roman musician Giovanni Giacobetti, known as Tata. He was an author as well as a passionate jazz lover.

The orgin of the name Quartetto Cetra, is a matter of debate. But some people believed it referred to the cither (in Italian cetra), the ancient four strings musical instrument. While other critics believe that it was a tribute to the record label of the group. The label of the debut, which took place in Rome at the Teatro delle Arti, in October 1947.

Quartetto Cetra was not just a recording band of Italina music in the 50s. They also started a theatrical career.

Getting in the show biz

Their first great success in the world of musical was “Gran Baldoria” (1951), a show by Garinei and Giovannini which featured “Vecchia America” (Old America), one of the vocal group’s greatest hits. This show was followed by “Gran Baraonda” (1952), co-starring two myths of Italian show-business, such as the famous show-girl Wanda Osiris and one of the greatest Italian actors of all times, Alberto Sordi. Quartetto Cetra’s smahing hits from this musical show are “In un palco della Scala” (In a box at the Scala theatre), and above all “Un bacio a mezzanotte” (A midnight kiss).

The arrival of television gave them the opportunity of reaching larger audiences. The most innovative contribution that the Quartetto Cetra to the Italian TV is indubitably their role in the seminal TV show, “Studio Uno.” They made charming and brilliant, musical parodies of popular films and novels, from “Gone with the wind” to “The three musketeers”.

Quartetto Cetra produced records in series, with impressive selling figures. The audience loved the light and innocuous humor of their lyrics, as well as their melodic and lively hits. They were the perfect soundtrack for Italian music in the 50s. But, two decades later, their appeal seemed to fade away and the four singers, already in their fifties, virtually retired.

Italian music in the 50s

The 1950s’ in Italy were the decade of reconstruction and rediscovery. The country opened to the outside world. This was the dawn of the economic boom and of the age of innocence. In the 50s, Italians were still very provincial and naïve in their musical and artistic tastes.

But the fabulous 1960’s were approaching and teenagers were going to seize control of pop music. Time to dance it out.

Are you curious about the festival of Sanremo? Here’s our story!