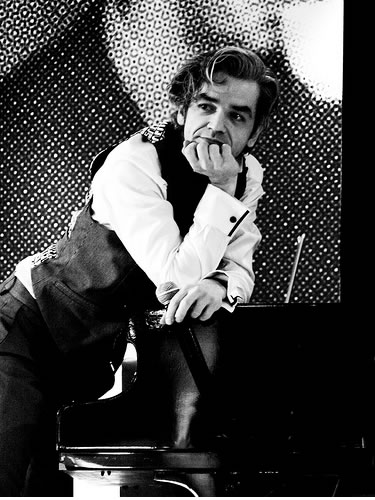 The very first time that I saw Morgan on TV, I changed the channel as I had a natural desire to shut him off, thinking “there we are again, another artist wannabe with zero talent who ended up on primetime television because of his connections.”

Months later, after being bombarded by the constant presence of this bleached blond Captain Morgan look-alike, I decided to do a bit of research and finally understand what was so special about him, aside from the fact that he had been married for a short while to Asia Argento. My research was very basic: I googled his name and eventually I ended up on YouTube where I watched many of his TV appearances. It was then I realized something important: I had never, until that moment, actually heard his music. And I must admit that was a revelation. Morgan is a great musician.

From that day on, I dramatically changed my point of view. While I must admit that socially and as a public figure he still doesn’t convince me, he has certainly gained my respect and attention as an artist. I would like to stress this concept a little further, because too often artists and even athletes have the problem of been great at what they do, yet they can be very bad examples for others, especially to the younger generations that look up to them. I don’t want to put Morgan on trial now, but simply take him as a case built up by the media, something to think about.

Very often, whoever is called to search deep inside oneself to create and perform art lets personal life take the backseat.

In my opinion, Morgan is a typical example of that; he floats within himself, searching for musical perfection, ignoring other interests and aspects of his existence. He is not a bad person, and is not deviant in his style – as a matter of fact, his tones and content are actually very traditional and lean toward the classics. But for some reasons he has difficulty holding himself together and always ends up appearing to be a weak man in need of help. This is exactly the opposite of his music.

At the end of 2009 and the beginning of 2010, Morgan was at the center of a big scandal after an interview in which he admitted to the use of cocaine and somehow sounded like he wanted to encourage it. In my opinion this was a call for help, a desire to at least talk about his issues and possibly seek therapy, but the media attacked him.

While my belief is that the message from artists and popular figures of all kinds should be that drugs are bad and wrong, I can still see that Morgan’s admission might have been a first, important step in his recovery. He has since had plenty of opportunity to explain himself and to directly talk to the Italian public, which he has done on several occasions, and now he has a wide open road to speak through his music, leaving the gossip magazines behind.

Morgan, “La Sera”. The song was forbidden at Sanremo because of its referencing drug abuse

I personally believe that Morgan can become an incredible name, internationally as well as in Italy, but he must believe in himself the same way he believes in his piano when he touches its keys. That metamorphosis he goes through every time he plays an instrument must occur also in his brain. Being a musician is emotionally demanding, but also very rewarding. My advice to him, therefore, would be to believe in himself, be thankful for his talent and let it grow.

I don’t want to sound preachy, and I apologize to Morgan if I came across like that, but I believe in the power of the arts, in the ability of music to reach people and deliver powerful messages. Morgan has the fortune to attract an audience, a hugely difficult thing to do, and if I had to tell him one thing it would be that the only way to keep that audience, to stay alive and strong, is to be honest with your feelings and let them infuse your music with depth and resonance.

I wish I had your musical talent. Good luck!