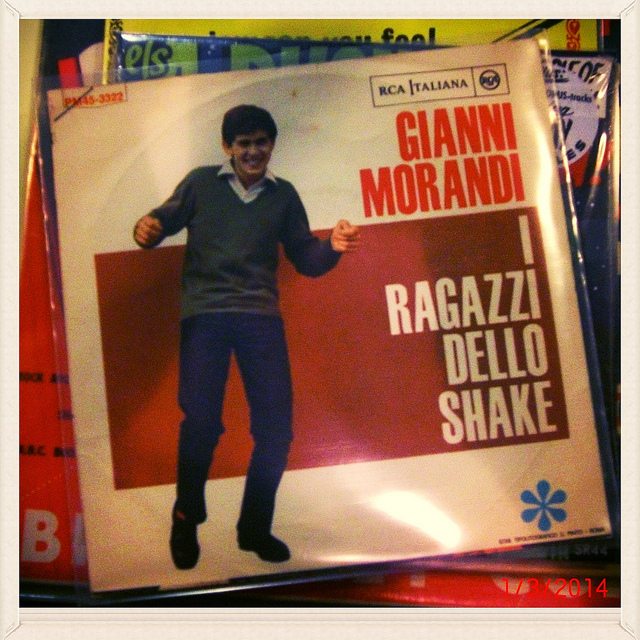 Covering a popular song is a pretty common occurance in American music: artists pay tribute to others by doing so, often freshening up the success of a tune. Some examples? Well, the first coming into my mind draw from my grunge-punk (god bless the 1990s!) background, still provide good examples: Nirvana’s cover of Bowie’s “The Man who Sold the World”, Social Distortion’s “Ring of Fire”, by legendary Johnny Cash, or Cash’s own amazing rendition of industrial icons Nine Inch Nails’ “Hurt”.

Jimi Hendrix covered Dylan’s ‘All along the Watchtower” (also later covered by U2) and it was Prince who first recorded “Nothing Compares to You,” eventually made legendary by the voice and haunting eyes of Sinead O’Connor.

Want some pop-friendly examples? There is plenty: No Doubt’ s 2003 single “It’s my Life” is the cover of the homonymous, 1984 song by Talk Talk. Whitney Huston’s famous “I will Always Love You,” soundtrack of The Bodyguard, was originally recorded by country legend Dolly Parton and even Beyoncé “covered” (although many read “plagiarized”) a piece by 20 year old  BC Jean, when she sang “If I were a Boy”.

Especially in the 1960s and 1970s, but also in more recent decades, Italy embraced covers. However, Italian music transformed covers into a means to make foreign music more accessible to the Italian public (notoriously bad with languages). “Covering” a foreign song was also a way for Italian artists to increase their own popularity, by proposing their own creative take (usually in the form of lyrics and musical arrangement) on already established songs. The main difference was – and still is – of course, the language: lyrics were either translated or, more often, reinterpreted. Other times, lyrics were written from scratch and only the original melody was left untouched.

Curious to listen to some Italian covers of American classics? We’ll give you some examples below and … up to you to decide whether the Italian cover is as good as the American original.

Still very popular – and covered: Lady Gaga sang it live in 2014 –  today, Bang Bang became a hit in 1966 when Sonny and Cher released it. The slow going, yet catchy tune was immediately spotted as a potential hit by Italian discographics and was recorded, with different lyrics, by Equipe 84, a popular progressive rock band belonging to the “Clan Celentano,” and by iconic Italian-French artist Dalida. Born from Italian parents in Egypt, Dalida became famous in France, where she found in Paris her own home. She, however, remained very attached to her Italian roots and often sang in Italian. Known also for her tragic love story with Italian sogwriter Luigi Tenco, who committed suicide in 1967 after his elimination from the Festival di Sanremo, Dalida took her own life 20 years later, in 1987, in her own home in Montmartre. Today, she is still loved and missed by French and Italians alike.

Dik Dik is a seminal group of Italy’s 1960s beat rock, whose popularity was certainly helped by their ability to adapt foreign hits to the Italian market. California Dreamin’, by the Mamas and Papas, was an instant hit in the US and it was lyricist Mogol to propose the song to Dik Dik’s producer for an Italian version. The musical arrangement was kept and lyrics, created by Mogol himself, remained faithful to the English original.

“Senza Luce” is Dik Dik’s version of Procol Harum’s A Wither Shade of Pale. The hermetic character of the original lyrics gets lost in Dik Dik’ s version, written once again by Mogol who is, as an incise, especially known for his decades-long collaboration with Lucio Battisti.

Today, Caterina Caselli no longer sings, and concentrates her activity on music production and talent scouting. However, she still is, at least in Italy’s collective imaginery, a symbol of “yeah-yeah” Italy, the young, fun loving Italy of the 1960s. With her short bob of blonde hair and her childlike face, Caterina Caselli was a symbol of those years. Her first hit was 1966’s Nessuno mi può Giudicare (Nobody can judge me), but popularity rose exponentially with her 1967’s rendition of the Monkees I’m a Believer. Her version took the title of Sono Bugiarda, I’m a liar, and  is more ambiguous than the original: Caselli’s juxtapposes the title phrase “I’m a liar” with declarations of undying love for her new beau, leaving listeners with the doubt she is, in fact, lying about it all.

R.E.M. are gods of alternative music and I remember feeling outraged, as a teen, when Ligabue’s version of their 1987’s hit came out. “Il Liga”, as he is affectionately known to his fans, has been rocking Italy’s radio waves since the late ’80s, with his style made of American-style music and Italian words. I always found Ligabue a bit too caricatural of a certain type of American rock imagery, with his long hair and cowboy boots, but truth is he’s been keeping up there, among the best loved artists in the country, since the early days of his career.

His version of R.E.M.’s song kept the original’s beat and rocky musical arrangement, and adapted the original lyrics to an Italian context, with references and names which would be meaningful to Italians. The result is a pleasant enough song, although I remain an R.E.M. fan, so I don’t find it near as good as the original…

American songs covered in Italian: A che Ora è la Fine del Mondo (The End of the World as we Know it), sang by Ligabue (1994).

The history behind the original song is long and varied and touches upon Dylan’s friends and love stories, or so many thought at the time: to some, the song was about Anita Pallenberg, at the time girlfriend of Dylan’s friend and Rolling Stones’ member Brian Jones. Others more simply thought Dylan wrote it to his wife, Sarah Lowndes, whom he had just married. A bunch of critics also gave it a much more sombrer interpretation, reading it as a love song to, alas, heroin.

Whatever the true recipient and meaning of the original, Nomadi’s version of it is a song dedicated to an ended love, with lyrics of despair and rage, peppered here and there with that political afflatus the band has always had, especially in the first years of their career. Nomadi are, today, considered among the most iconic Italian bands and have the rare characteristic to be liked by people of all ages: parents love them because they remind them of their youth, teenagers do because they feel the angst of their early production very closely.

The Sound of Silence is probably one of Simon and Garfunkel best known songs, also because of its presence in the soundtrack of The Graduate. The guitar intro and the syncopated rhythm kept throughout the song are probably more famous than its lyrics, and have been maintained in its Italian version, recorded in 1967 by singer Dino (even though there are other cover versions of it, one of them by twice-mentioned in this article Dik Dik). The touching lyrics of the original, for some inspired by JFK’s assasination (that happened only a few months before its release), for others (Paul Simon included, in truth) by the inability of people to communicate, have been somehow trivialized in “La tua immagine“, a rather plain love song.

Dino, who sang “La tua Immagine“, is nevertheless one of the most representative artists of 1960s Italian music and probably one of the few who can say one of his own songs, 1968 “Gli occhi Miei,” was covered in English by music icon Tom Jones, with the title of Help Yourself.

Gianni Morandi is one of Italy’s best loved figures in the music business. He started very young and quickly became Italy’s music golden boy, loved by moms and daughters. He was, during the 1960s, embodiment of the quintessential good Italian boy, an image mirrored in his songs, more often than not carefree declaration of love and happiness. Things sort of changed in 1966, when Morandi released “C’era un Ragazzo”, a simple, yet extremely powerful j’accuse against the war in Vietnam. Morandi’s song, which reached the head of Italian charts, was banned by Italian television RAI for quite sometimes, but became an international hit: Joan Baez sang it, too.

“Scende la Pioggia” is the Italian version of the Turtles’ Elenore. The lyrics have been changed, but the song remains an easy-to-listen love tune telling the story of a man walking under the rain and thinking about how much he’s been suffering for love.

Marina Rei had hed heyday in the mid to late 1990s and “La Primavera” is probably her most notorious hit. The lyrics are a breezy description of teenage life, the tune supported by a well known video, very reminiscent of that type of 1950s aesthetics brought back into fashion by Thelma and Louise in those very years.

American songs covered in Italian: La Primavera (You to me are Everything), performed by Marina Rei (1997).

Fiorello was, and still is, one of the best known names of Italian tv and music; a polyedric artist, he began his career as an animator in holiday villages, where he was discovered by Claudio Cecchetto, Italian deejay and famous talent scout. The 1990s was the decade of Fiorello’s consacration to fame: he had his own daily show, “Karaoke”, and released some very famous songs, mostly cover versions of American classics, just as Sì o No, the Italian version of Please don’t Go. Lyrics and the musical arrangement were changed and the song was transformed into a disco anthem. The song sounds pretty dated today, but it was a huge hit when it first came out in 1993.

Thank you for this! I grew up listening to my dad’s records of Italian covers. I learned more of these songs in Italian than English. I can’t wait to play these for him next time I see him!.