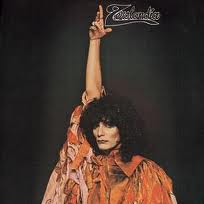 Renato Zero was born Renato Fiacchini in Rome, on the 30th September 1950. Zero is one of Italy’s music icons. A powerful performer, yesterday and today, Zero’s histrionic personality made him an amazing stage animal since the very beginning of his career. His creativity shined through his music, but also flamboyantly appeared under everyone’s eyes with his costumes and dressing up ensembles.

Zero started his career in the 1970s, when he fully embraced the climate of freedom and rebellion that had invested the country after the events of 1968. Drag attire, long hair, full on make up and glittery stage props, all contributed to make of Renato the first artist of his kind in Italy. It wasn’t all about the appearance, of course: Zero was, and still is, primarily a talented singer songwriter, who brought the Italian people to love his language, which was direct and understandable by the younger generation, and his content. His words spoke for the first time about issues that pop music had not touched before but which clearly interested and attracted a huge audience. What seemed at first to be simply provocative turned out to be a significant call to fans who really wanted to connect with the issues he was able to raise.

He brought into the spotlight the topic of homosexuality, until then carefully left out of the Italian entertainment industry. Zero always took a very ambiguous approach to the topic and this made his songs even more powerful; in many ways we can say that he anticipated people like Madonna or more recently, Lady Gaga. Indeed, before Zero no one had seen a man dressed like a woman and give a real performance, without mocking or spoofing it. Zero also introduced one of the first curse words ever uttered in Italian music, and although the very mild “bitch” was said in his lyrics, at that time it felt like a major break away from the rules and the “controlled performances” that strict censorship enforced. But, Zero did it; he did it on his records, he did on his TV appearances and he did it on his live shows.

His success was huge and very fast, and he put together a marquis that was home to his concerts. He called it Zerolandia and the rest is history. For a while he faded out of the mainstream but then in the mid 90’s, with a more conservative look and a more mature appeal, he had a very strong comeback. This captured the interest of his former fans and also intrigued newer fans, youngsters who connected with him just like their parents had. Since his comeback, he has not stopped and actually has been able to book even more time on TV than before, with very special guest appearances. His concerts sell out whenever he takes the stage.

The key to his success is his talent, not his dress or the subject material he sung about. Indeed, those turned out to be distractions, minor details in the context of his really great music. His art definitely overcame his transgressions and he kept his relationship with his fans intact, holding on to his unique way of communicating directly with his audience. He is now a father or older brother figure, who doesn’t give advice based on social clichés; instead he says “Yes I hear you, and that is how I see it.”

As years go by, his style and sound are still very fresh, and his fans are always eager to find out what he is thinking of next; after all, today’s taste and standards are probably close to a perfect match to Renato Zero’s vision of society, and of the world in general.