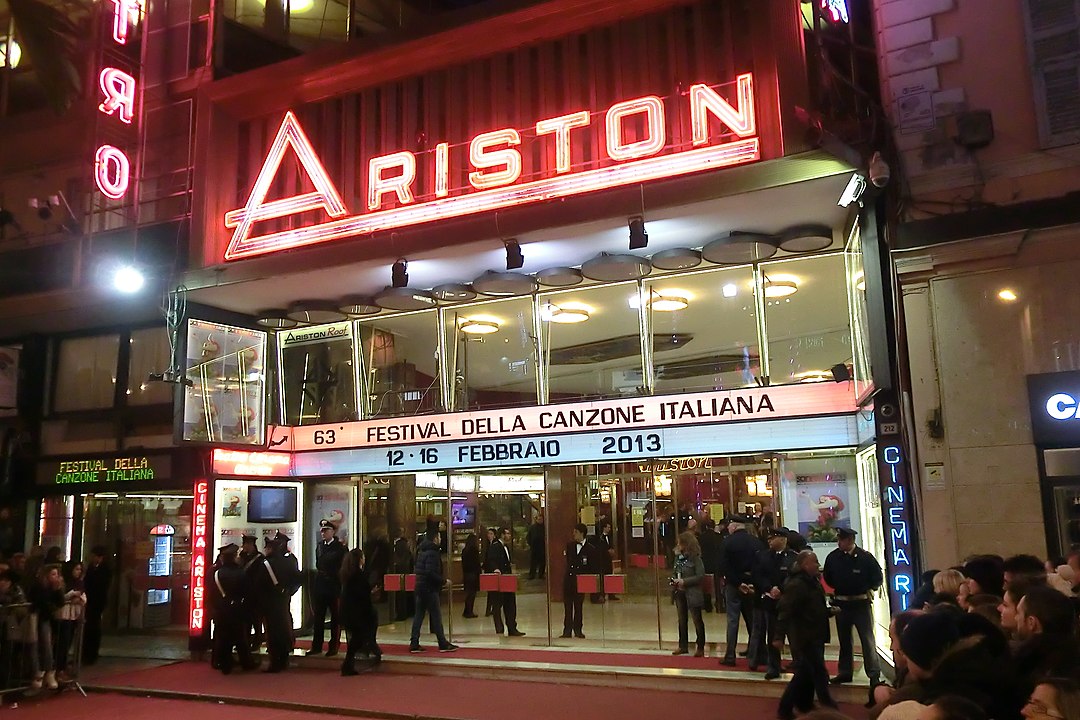 Music is very important for Italians, because singing is part of our own history and tradition. Traditional Italian music has had, since the 1950s, a most prestigious appointment followed by the entire country: the Festival di Sanremo.

The Festival di Sanremo is also known as Il Festival della Canzone Italiana, the festival of Italian music. It takes place at the famous theatre Ariston in Sanremo where, for a week, famous -and less so- Italian singers and performers propose original songs, newly written just for the occasion.

The first Festival di Sanremo was organized by the entrepreneur Pier Busseti and was broadcasted on the radio in 1951. Italians embraced the Festival straight away, and their love for its music  and allure never quivered. The Festival’ s week sees singers and stars walk Sanremo’s red carpet, surrounded by the beautiful flowers of Liguria, under the eyes of millions of Italians.

The second category is made up of  both unknown or relatively young artists, who use the Festival as a platform to get exposure. However,  winning the festival doesn’t always mean becoming famous!

There is a rule all participants must follow: the song they perform must have never been performed in public and must be entirely original.

Nilla Pizzi, Adriano Celentano, Little Tony, Iva Zanicchi, Ornella Vanoni, Milva, Renzo Arbore, huge names in the history of Italian melodic music, are only some of the famous  singers who have taken part in the Festival of Sanremo in the course of its history.

More recently, Eros Ramazzotti, Laura Pausini and Elisa who became famous internationally, have also been part of the Festival. Ramazzotti won the overall competition in 1986 with Adesso Tu,  Pausini was the best among the Nuove Proposte in 1992 with La  Solitudine and Elisa triumphed in 2001 in the “Big” competition with Luce.

The Festival, though, is not only about the music and its singers.The Festival also belongs to its presenters, who often play a very important role in determining the success or failure of the event.

When you say Festival di Sanremo, almost every Italian thinks of two names: Pippo Baudo and Mike Bongiorno, who presented the show 13 and  11 times respectively.

In recent years, big names of Italian TV like Carlo Conti, Paolo Bonolis and Amadeus — who is presenting this  edition (2020) have  made it to most famous stage in the country.

The Festival is also an occasion to remember big names of the Italian music. Every year one evening is kept for covers of important songs of the past. The first evening in 2017 witnessed a touching moment when Tiziano Ferro sang a song by Luigi Tenco, 50 years after he committed suicide during the Festival.

The Festival di Sanremo is truly  a cultural event and  it is today considered a bona fide Italian tradition.

Guests at the Festival di Sanremo

The Festival has always had some guests of International prestige. Some of these did not conform to the traditional substance of the Festival, often accused of being too classic and anchored to the same old artists, thus causing debates and arguments.

Probably the most “shocking” was Dita von Teese, the famous Burlesque queen, that in 2010 stripped on the stage, remaining covered only in diamonds worth 2,5 million dollars.

Dita Von Teese stripping at the Sanremo Festival in 2010

In 2015 it was the presence of drag queen Conchita Wurst, that won the Eurovision Song Contest in 2014, to raise complaints, mainly from the Catholic advocacy groups.

This year (2020), Mika, Dua Lipa and Scottish singer  songwriter Lewis Capaldi are performing at the  Ariston.

The Festival di Sanremo is an event that draws millions of viewers every evening, attracted not only by the music, but also the culture, the fashion, the gossip that revolve around this music show.