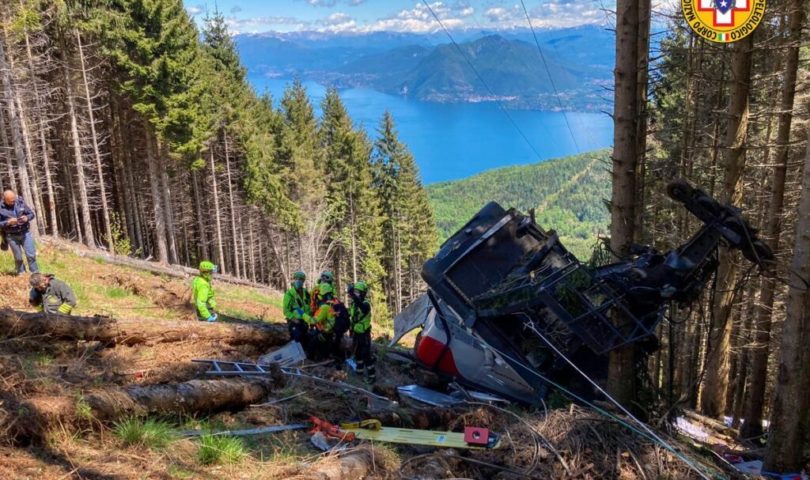 Sunday was supposed to be fun. A day with a view and with the family. Then, tragedy struck.

What happened at the Mottarone cable car shook everyone. Most of all, the five destroyed families. And the one little and young survivor, a 5-year kid who is at the hospital in severe conditions. The last hopes lay with him.

A painful day at the Mottarone cable car

It happened on Sunday morning. Right at the beginning of a day of fun and relax. Then, the whistle and the free fall. Two witnesses talked about hearing the whistle and seeing the cable car slide backwards at scary speed. The witnesses saw it hit a pylon and bounce. After two leaps on the ground, the car stopped against the trees.

Investigators confirmed that the cable car fell for 20 meters. And with it, the 15 people onboard. The car hit the trees below, in a devastating impact. Lieutenant Colonel Giorgio Santacroce was one of the officers at the scene. Him and the Carabinieri confirmed that the a broken cable caused the tragedy. Allegedly, the cable “gave out.” In fact, 15 people was the right capacity of the Mottarone cable car, which could even hold more. Hence, overload wasn’t the issue.

”We are verifying why the security system, which in case of a break it should prevent the cabins from falling to the ground thanks to the breaking system, didn’t work,” Santacroce said to the press.

Who’s in charge of the maintenance

The last review of the Mottarone cable car happened in November 2020. And the company Leitner was responsible. The president Anton Seeber confirmed that the last check of the cable took place last fall and it didn’t show any issues. On the other hand, the last general revision happened in 2016. This included checking the whole structure, the cabins, and the electronic devices. After that, the company made a yearly check on the cable -and the cables only.

While the Leitner company is quick at defending itself, investigators have seized the Mottarone cable car. And they are investigating the crime of multiple manslaughter.

Honoring the victims of the Mottarone cable car

While law enforcement investigates, the victims deserve their recognition. Five families died in the tragedy. Here are their names:

He’s a 5-year old who is now at the hospital Regina Margherita in Turin. He underwent surgery on Sunday and now his in reserved prognosis, intubated and sedated. His parents and his little 2-year old brother died in the Mottarone cable car tragedy. His aunt Aya Biran, the father’s sister, has reached the hospital to be with him. He’s in critical condition, but hope is the last one to die.

”We don’t know what direction this will take,” the aunt said to the press, “the trauma includes a head trauma. We have to see how the situation evolves.”

On the morning of Wednesday, May 26th, the investigators confirmed that three people are in custody. They admitted to tampering with the brake to avoid any stops or disservices to customers. One of the three people is the manager of the Mottarone cable car. Investigator Alberto Cicognani confirmed this to Rai 3 during an interview.

“There had been malfunctions on the cable car and they called maintenance, which didn’t solve the issues, or they solved it just in part. To avoid more interruptions of the service, they

Investigators have put the Chief service of the cable car, Gabriele Tadini on house arrest. The other two, Nerini and Perocchio, have been let free for lack of substantial evidence. In fact, it looks like Tadini was the one who asked to put the device to stop the emergency brake from functioning.

However, the investigations are far from over. In the meantime, all eyes are on the survivor, whose name was released. He’s Eitan, the 5-year old survivor from Israel. The doctors are slowly getting ready to wake him up and they report Eitan took a few breaths on his own. He even talked to his aunt, so doctors expect him to leave the ICU unit soon.

Hopefully there is one survivor, it is a blessing !

The circomptences are so weird, why the security didn’t work, what happened !

Is it a terrible news… poor kid who lost his parents

0
Life in Italy > News > Tragedy at the cable car, 14 deaths at the Mottarone