Italy is living a particularly delicate period, both in politics and economics, and Italians seems to be tired of it. The spirit prevailing among people, and the will of change has been marked also in the field of politics with the birth of a new party: il movimento cinque stelle. It is considered as an evolution of the political, cultural and social activism promoted by the comedian Beppe Grillo, who’d talk about a “libera associazione di cittadini” free association of citizens, rather than a party; he does so in order to take distance from classical positions of Italian politics and to underline its difference, being it in favor of citizens and not of the personal interests of politicians.

Born as simple protests and from public speeches held in order to shake Italian citizens, the ideas and words of Beppe Grillo were considered useless attacks towards political power. Low importance was given to his initiative,  who was snubbed by the “powerful people” in the government and mocked by the medias. His followers were derogatorily called “grillini”, from his surname Grillo. However, time has turned the tables and the movement seems to be more and more supported by a lot of Italian citizens. 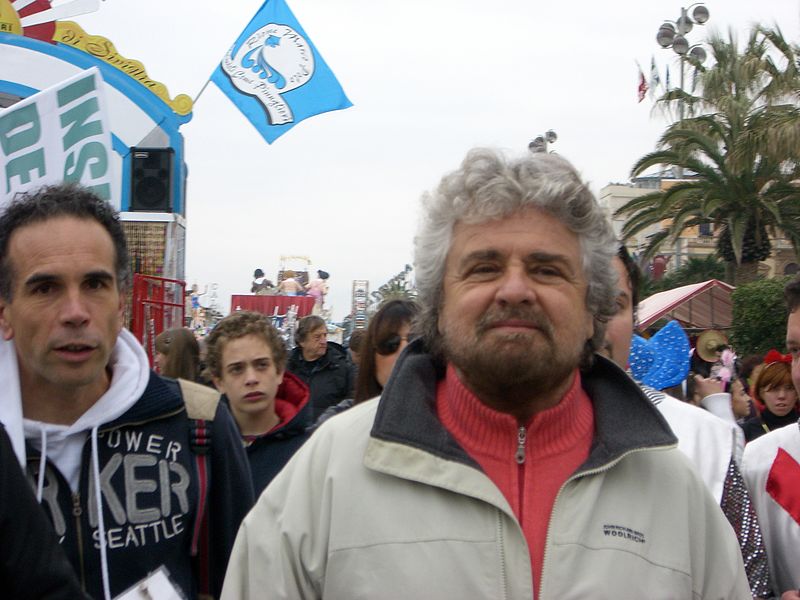 Grillo became first active on his blog, the popularity of which was increased by his public debates. So popular he became, he eventually decided to create the Five Star Movement.  The five stars refer to the five main themes linked to the movement: public water, transports, development, connectivity and environment.

The official date of birth of the Movimento Cinque stelle is October 2009 and its creation is considered quite atypical, as it was born more out of public outcry,  than sheer political ideology. Among the many public demonstration of resentment organized by the Movimento Cinque Stelle, the best remembered is certainly the  the V-day, standing for Vaffanculo Day (f..k-you day) as a form of protest and to give birth to some changes in the elections and people to vote. Moreover, the idea of a non-statute of the movement and the willingness to not to be homologated to a political party rejecting to be defined as such are revolutionary choices themselves.

The movimento created by Beppe Grillo has attracted a lot of attention from several political and social outlets. It truly divided Italy in two: those who are pro or against Grillo.

Italians seem to be divided into two sections. Some supports this new movement because they believe it can be a new, fresh alternative to old school parties, an option to change the current state of things.

On the other side, there are those who heavily criticize Beppe Grillo accusing him of telling neither  the truth, nor his real intentions. They first attack his choice of defining 5 stelle a movement when it is actually a political party. They think Beppe Grillo criticizes others for their choices, love for power and visibility when he actually is very much the same.

Moreover, he seems to have alienated a good chunk of the female electorate, due to what he said about the participation to a tv show of one of the members of the movement: Federica Salsi was severely criticized for having taken part to a tv program. “La Tv è il vostro punto G, vi dà l’orgasmo” (TV is your G spot, it makes you women orgasm), he wrote a few days ago in his blog.

Whether controversial or not, loved or hated, what is certain is this movement was born from Beppe Grillo and it is now increasing in importance. We don’t know if it will have success and if it will manage to get a lot of votes during the future elections; however, regional elections in Sicily, which took place at the end of October, demonstrated the sheer political and social power of Grillo’s movement.