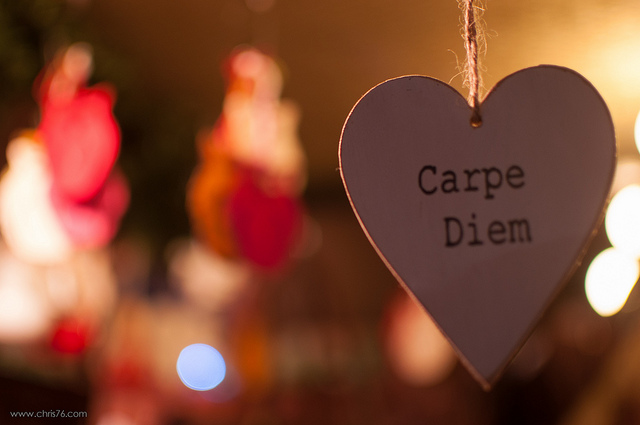 This multi centennial Latin expression became famous and quite common in modern times after the release of the 1989 motion picture Dead Poets Society. The Italian translation of carpe diem is “vivi alla giornata” or “cogli l’ attimo” (seize the moment) and the Italian title of the movie was not “La societa’ dei poeti morti” but “L’ attimo fuggente” (the fleeting moment). The movie showcased an amazing performance by Robin Williams, who played the role of a teacher in a prep school teaching his students to seize the day, which is, as we said, the exact translation of carpe diem.

The History of the Motto

Although carpe diem entered today’s society through a film and gained its new fame as an important line from Hollywood, it is in fact the product of the intellect and creativity of the Roman lyric poet Quintus Horatius Flaccus (65 BC – 8 BC), more widely known as Horace. His interpretation of the concept of carpe diem is somewhat controversial. Some claim that it means to get the best out of any day as if it were the last one, while others give it a more negative sense as in seize the day to protect it from the future, which is uncertain and possibly dangerous. Apparently, and there is confirmation in his other odes, the first of the two definitions seems closer to the actual spirit of the poet.

The term is first found in Book I of the Odes:

“While we’re talking, envious time is fleeing: pluck the day, put no trust in the future”.

Another  great Roman poet, Ovid, also used the expression carpe diem: such philosophical concept was strong in the Roman society of his time. The idea was to create room for a deeper sense of everyday life, of its values and its duration, while motivating people to obtain the most out of the present without procrastinating.

The concept of carpe diem, both in its original form, and as proposed by Hollywood movies, created a modern media wave, and many writers and artists enjoyed sharing the motto, asking their followers to bring more value to each single moment and grasp it, rather than waste it.

It is exciting to think that such a short, century old sentence had such a strong meaning throughout time, to so many different kinds of people. In art and in life, it continues to lead many in their quests to live the best life they can – each and every day.