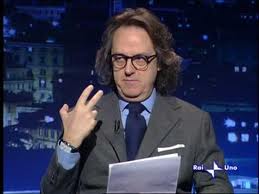 Gigi Marzullo is one of the most interesting phenomena on Italian television, the host of a very late-night talk show, offering long, deep, and personal interviews that close the day’s programming on the major Italian network, Rai Uno. He is an interesting phenomenon because Marzullo is not your traditional TV host. He is not funny but rather serious, someone with the ability to engineer some really nice interviews, although he often softballs his guests with questions that are very easy to answer. However, he has a conversational style that works really well and even though many make fun of the fact that he is labeled as the “2 a.m. host”, one way or another, all the most important Italian celebrities end up sitting in his guest chair. Anyone who watches the show tends to watch all of it, but then again everyone refuses to admit that it’s a good show. He avoids gossip and the Larry King news-style format, and if anything, is more like the late Tom Snyder.

Gigi Marzullo has a degree in medicine but never practiced. Originally from Avellino, he moved to Rome and started working for Rai. His show almost exists in its own world, and late-night ratings and competitors do not seem to be an issue for him; he shows no concern over being canceled nor is he considered a threat to other late show hosts. The specific questions he asks as the show progresses have become well-known, especially toward the end of the show, where he might close an interview with: ”Ask yourself a question and answer it by yourself”. The Marzullo way somehow seems to have captured the attention of many, therefore it’s not uncommon to hear a host on another show say, “Well, like Marzullo would say…” It is often done to mock him, but the reality is that he started a trend which has caught on.

Aimed at the audience of his own show, Marzullo created several spin-off shows, three in particular that are aired weekly, usually before his regular talk show. The formats of these deviate from the “one to one” interview and have a panel of guests, often the same every week, that are invited to discuss books, cinema, and theater. These shows are distinct from one another and have different titles, but have very similar formats. One or two guests might change within the panel, but the main group is the same for each show, but what changes of course are the topics under discussion. These shows have also reached a certain level of success and because of the recurring panel-members, the audience grows attached to them, feeling like they know them as friends. Though probably originally dictated by budget and scheduling requirement, the recurring panels of guests turned out to be a great idea and very successful.

In the greater scheme of Italian television, Marzullo does not rank highly; he will probably never host a major event or primetime show, though he is often invited to attend. That being said, there is no doubt that he will be remembered in the future, as he has chiseled a niche for himself in the history of the Italian TV. After all, knowing that he has the very last word in the network’s schedule could be considered a responsibility and a honor, and there are many late-nighters out there that tune in every night to hear it.