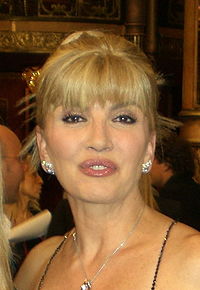 Classy, elegant, and always within the lines of propriety, Milly Carlucci is a true lady of the screen. Carlucci started as an actress in films, but soon revealed a special skill for television, one that led her to become one of the most important hosts in the history of Italian tv. In the spotlight for over 25 years, Carlucci continues to be successful, garnering high ratings with primetime shows. She is not only talented, she is also a very beautiful woman who seems to have hardly aged at all. Proficient in English, with an impeccable accent, Milly Carlucci is also one of the few hosts in Italy that can actually entertain international guests without sounding ridiculous.

Carlucci’s career has been long and very successful, but in recent years she has gotten even more famous, landing hosting duties on the Italian version of Dancing With the Stars and its spin-off, Dancing on Ice: this type of reality shows, all centered on performance and low on gossip and interviewing have proven quite popular with the public. Milly seems to be the perfect host for such shows, always elegant, always proper and with a great sense of humor, Carlucci always comes across as pleasant and friendly.

For the most part Milly Carlucci has spent her career on the RAI network and belongs to the group of TV hosts that prefer to stick with one network, rather than jumping around. Although Carlucci did try private tv, she never reached the level of success she did with the public. Sticking with RAI paid off not only in terms of audience, but also in terms of the artistic freedom given to her to control her product. Carlucci mixes soft and feminine with strong and intelligent, treating people on her stage the same way she would if she were welcoming them into home.

Milly Carlucci has two younger sisters, Gabriella and Anna. Gabriella also has a very important career on television, although with a completely different style. Gabriella’s shows were more adventurous and have been concentrated on nature and traveling, although lately she’s dedicated herself to politics. Elected to several terms as a congresswoman for Silvio Berlusconi’s party Gabriella has certainly made her mark. Anna has always been more involved in intellectual/culture based shows, but her public career never took off, probably because her interest laid more behind the cameras.

While it would be wonderful to see a new Milly Carlucci emerge from the current generation of television personalities, nobody seems as of now, to be able to come even close: sadly, the trend, in fact, seems to be going in the opposite direction. Television in general has gotten louder and more vulgar, with more value placed on looks than talent and content. While Milly Carlucci often makes it look easy being such a good entertainer, hers is not an easy job. Being so at ease as a host takes real natural skills that many others in the same role–who are just as successful–don’t have.

Italian readers may remember the very special show Giochi Senza Frontiere that introduced Milly Carlucci to television and the world. It was a television event that kept an entire country glued to their television sets and now, so many years later, Milly Carlucci remains to entertain and make Italian television better with her presence and natural flair.