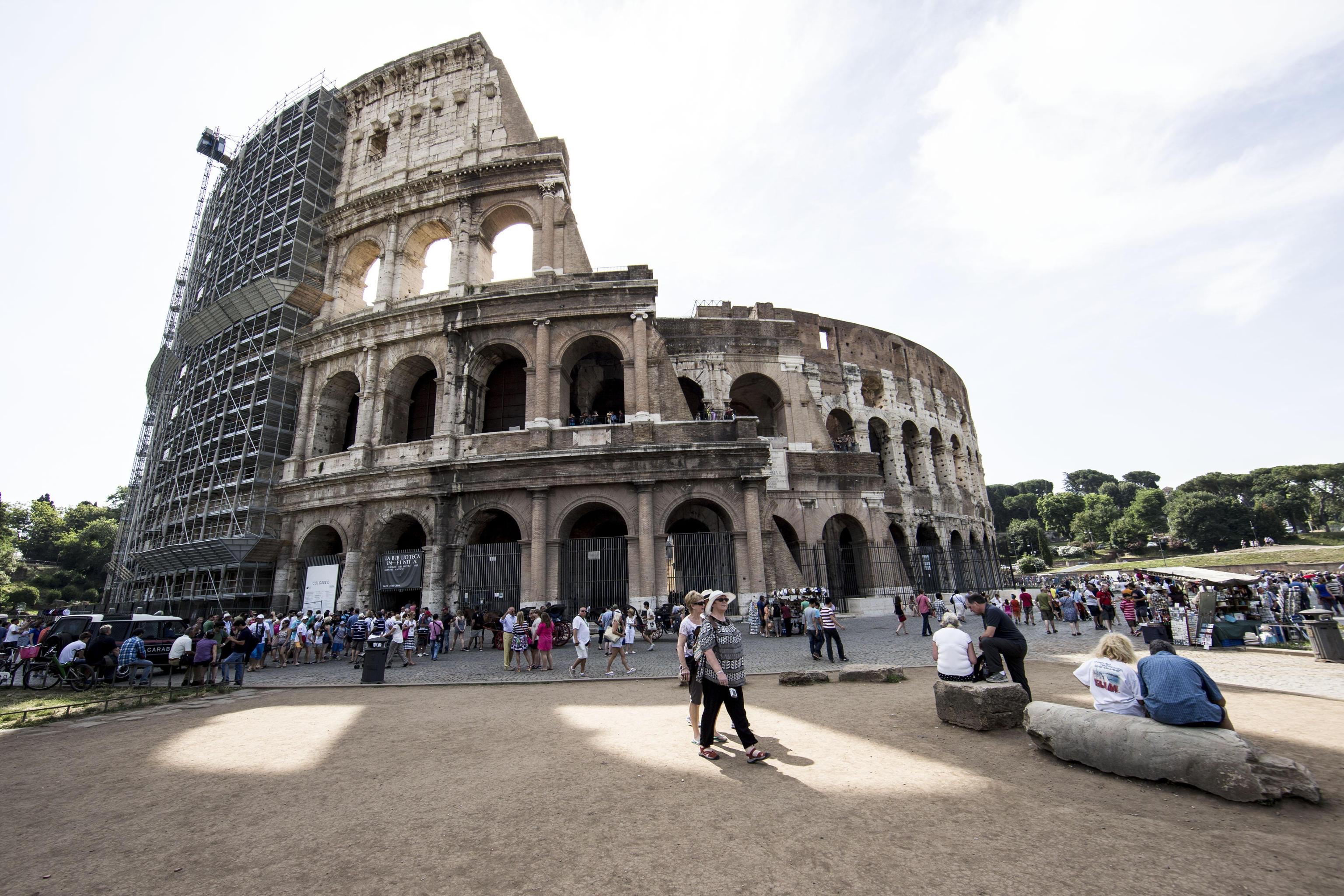 When I saw the Trevi Fountain in March this year (2015), its statues looked miserable behind scaffolding, and there was no gushing water. According to tradition, visitors who want to return to the Eternal City throw three coins into the Trevi Fountain, but who wants to toss coins into it when it is empty? Many disappointed tourists have complained about the length of the works, which will keep the fountain empty until October. Some have even said that their first view of the Trevi Fountain was ruined.

However, the Trevi Fountain desperately needed repairs. Chunks of stone and stucco  had fallen off in recent years, and cracks and fissures had been worsening. Pollution,  the weather,  tourists, all took their toll on the monument featured in so many classic films, such as La Dolce Vita.

Luckily, luxury brand Fendi came to the rescue. It decided to sponsor a twenty-month, 2.2 million euro restoration of the spectacular monument.

Fendi is not the only fashion brand to undertake the duty to clean and renew Italy’s artworks. Other fashion houses such as Tod’s, Pucci, OTB, and Ferragamo have joined in the effort of what has been named the corporate sponsorship of artworks’ restoration works.

Tod’s and the Colosseum

Rome’s best-known sight, the Colosseum, was in need of help.  Pollution had been dirtying it and its masonry structure had been weakened by time, endangering tourists. Diego Della Valle, Tod’s chairman, who turned his grandfather’s small shoe company into a large global business, wanted to do something for his country, and considered the restoration of the monument as a perfect opportunity.  He pledged twenty-five million euros to help the Colosseum return to its splendor, in exchange for the right to use the monument on Tod’s products and stamp Tod’s logo on the back of the entry tickets.

The Colosseum’ construction works started under the rule of emperor Vespasian in 70 AD and were completed by his successor, Titus, 10 years later.  With an estimated capacity of up to 80,000 spectators, it was used to host gladiatorial contests and public spectacles.

Today, it is a major tourist attraction in Rome. The restoration uncovered the original seating plan of the arena. Latin letters and numbers painted in red at the entrance gate arches enabled spectators to find their seats easily. The audience was divided according to class, but tickets were free. Apparently the emperor’s box had the best view while the poor sat on wooden benches.

Pucci is another famous fashion house that sponsored the restoration of an important Italian monument. The Italian company launched a limited edition of a new version of its distinctive Battistero scarf to help fund the restoration of the Opera di Santa Maria del Fiore in Florence. The company donates all proceedings from the sale to a restoration fund.

Marquis Emilio Pucci originally drew the Baptistery scarf motif by hand in 1957. It quickly became one of his best-known prints. When the company reintroduced the scarf, it also wrapped the Baptistery scaffolding in 2000 meters of fabric printed with the colorful design. Laudomia Pucci, the CEO, wants the public to “get behind a great cause that marries fashion, architecture, and history” by buying these beautiful, limited-edition scarves.

Renno Rosso is the CEO of Only the Brave, a huge fashion company that owns brands such as Diesel and Maison Margiela. Not to be outdone, OTB sponsored the repairs of the Rialto Bridge in Venice with 5 million euros. The delicate Istrian stone used to construct the beautiful bridge runs the risk of breaking when permeated by water. Although the bridge was not in danger of collapsing, the 140 columns supporting it needed fixing, and the area around the adjacent Camerlenghi Palace had sunk twenty-five centimeters since it was first built.

Rosso pledged the money on condition that the scaffolding on the bridge featured advertising for OTB brands in time for this year’s Biennale. Just another example of how companies supported the arts financially, to get advertisement in exchange.

Bulgari and The Spanish Steps

Italian jeweller and luxury goods manufacturer Bulgari has pledged 1.5 million euros for the restoration of Rome’s iconic Spanish Steps. The donation is intended as a “special tribute” to the Eternal City on the 130th anniversary of the company, which has its flagship store in Via Condotti, just a few steps from the elegant stairway leading from Piazza di Spagna to the church of Trinità dei Monti. The funds will be made available in three tranches, the first of which has arrived last March. Restoration has not started yet, but it should soon.

Another monument in the Trinità dei Monti-Piazza di Spagna area restored with private fundings was the Barcaccia fountain: as readers may remember, restoration works had just ended when a group of brutal Dutch hoolingans damaged this iconic piece by Bernini, creating horror and disdain among people.

The cash-strapped and debt-ridden Italian government welcome this corporate sponsorship trend. Mr. Franceschini, the Italian Minister for Culture, last year announced a large tax deduction system to encourage private-sector donations for the restoration of artworks and cultural institutions, such as museums and libraries. Dr. Marino, the Mayor of Rome, also encourages these private donations, and even distributed a list of monuments and artworks that need repairs to foreign diplomats.

Corporate sponsorship of artwork’s restoration in return for advertising and other commercial benefits has, however, caused controversy.

Huge ads for Bulgari on the Bridge of Sighs in Venice, for example, created an uproar; after their sponsorship of the Colosseum’s restoration works, Tod’s gained the exclusive use of the monument’s image, as well as the right to print their brand on the entrance tickets to the monument, a fact that created some debate, too. Others also criticized the Mayor of Rome for letting the Circus Maximus to the Rolling Stones for an outdoor concert.

During the first phases of this trend, fashion brands would go pretty heavy on the ads to place on and around the monuments to restore. However, their advertising is today more tasteful.

If such an injection of money is essential, if not vital, for much of the Italian artistic patrimony, perhaps more companies should follow Ferragamo’s example: the fashion house donated 600,000 euro to restore eight rooms at the Uffizi Gallery. This is a “liberal disbursement”, a gift that does not include any commercial benefits in terms of marketing and communication. According to Ferruccio Ferragamo, “we wanted to do something significant for the city that welcomed our father in 1927”.