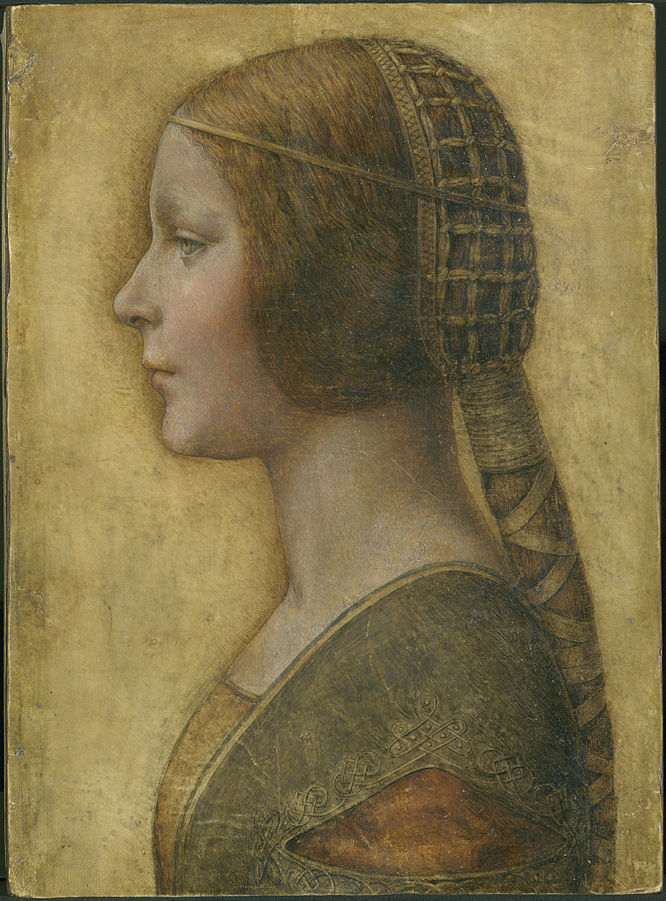 Taking  a journey into Italian  falsi d’autore will take us back a few decades.

In 1998, the world of art admired for the first time “La Bella Principessa,” known in English as Portrait of a Young Fiancée, an unknown portrait attributed by many experts to the genius of Leonardo da Vinci. The piece showed the profile of a beautiful young lady with pale blue eyes and dark blonde hair, coiffed in a typically Renaissance style. In spite of the similarities in style and coloring to other works of the Italian master, doubts about its origin rose almost immediately, with litres and litres of ink used to explain why it could not – or could – be the work of Leonardo.

The last in a series of revelations about the painting came from notorious British art forger, Shaun Greenhalgh, claimed he was its author: an  Italian falso d’autore….made in England! His confession has been criticized, namely by German art critic Martin Kemp, one of the strongest supporters of its originality. Greenhalgh maintained, in the book where he confesses to be the author of the painting (which, as an incise, was written while he was in jail for other forgeries), that the woman portraied was a supermarket cashier he used to work with. Her name was Sally.

Considering the sheer amount of works of art produced in Italy or by Italian artists throughout the centuries, it comes as no surprise to know Italian art is among the most forged. That related to the Portrait of a Young Fiancée is only the last in a long series of scandals involving Italian falsi d’autore:  art forgery, to many considered a form of art in itself, is not new, but as old as art commerce itself, as some these five famous Italian falsi d’autore demonstrate.

1. Michelangelo started as a forger

Michelangelo Buonarroti needs no presentations. Some of his works, such as the Sistine Chapel, the David, the Pietà – created when the artist was barely 20 years of age – are the very symbols of Italy’s artistic patrimony. What not many know, however, is that Michelangelo sort of started his career… as a forger. As a young artist, in 1496, Michelangelo sculpted a sleeping Cupid, which he proceeded to “age” by burying it for a time: the aim was, of course, to make a high profit out of it. The statue ended up in the hands of Cardinal Riario of San Giorgio, who bought it from an antique dealer. After a closer inspection, however, the cardinal realized his purchase was no antique and demanded a refund. Which he obtained and, charmed by Michelangelo’ s talent, subsequently devolved entirely to the artists. Some say Cardinal Riario of San Giorgio invited Michelangelo to work for him in Rome for an entire year, helping the young artist establish himself in the Roman artistic panorama.

A curiosity: this notorious Italian falso d’autore is no longer extant, it was destroyed in 1698 in a fire.

Botticelli is one of Italy’s best known painters and a true symbol of the Italian Renaissance so when, in 1874, the National Gallery in London came across two previously unknown Botticellian paintings, it called victory and purchased them. They were the Venus and Mars and An Allegory. The latter, in particular, was highly praised by critics and costed to the museum much more than its companion. The last decades of the 19th century were certainly not known for their investigative means – in the end, we are still looking for Jack the Ripper, right? – nor for their authentication technologies, so it took quite a while to discover that An Allegory was not the work of Botticelli, but rather of one of his students, who painted it in the typical style of his master. The painting remains a fine example of Botticellian style, yet… it is certainly not worth the price the National Gallery paid for it almost a century and a half ago.

During a visit to the exhibition “The Face of Leonardo: Images of a Genius” dedicated to Italy’s art masters, a twelve year old boy did what we are all not supposed to do when in a museum: he touched a work of art. Actually, scratch *touched*, he punched it.

The kid was on a field trip to Taipei, where the exhibition was taking place, walking around the museum with a soda in his hand. This is already pretty bad, as usually food and drinks are strictly forbidden in museums around the world, so you really start wonder what security had been doing instead of checking. But anyway…When he suddenly tripped in the vicinity of Fiori, a canvas by baroque Italian painter Paolo Porpora, and realized he was about to crash into it with his drink, he tried to avoid spillage and hit the painting with his fist instead, punching a hole in the middle of it.

The accident lead many Taiwanese journalists to do some research on the damaged painting and what they came across is quite startling: apparently, the piece exposed in Taipei may not be a Porpora at all, but rather a much cheaper, albeit just as old, imitiation of the master’s work made by virtually unknown Mario Nuzzi.

Nuzzi’s floral piece was sold at an auction last year at a price of 30 thousand USD.

Porpora or Nuzzi, Nuzzi or Porpora… the jury is still out on it.

4. The German who forged the most expensive sculptures in the world

Alberto Giacometti was an Italian Swiss sculptor contemporary of Pablo Picasso and Henry Matisse, known for his bronze creations. His piece L’Homme qui Marche (the walking man) had sold for a stuggering 100 million USD at an auction, the highest price ever paid for a work of art that was not a painting. L’Homme qui Marche detained the record until the 12th of May 2015 when Christie’s sold another of Giacometti’s works, the “Pointing Man” for an even higher price, 141 million USD.

In 2009, the German police arrested a man who had created and sold more than 200 sculptures, some of very poor manufacturing, passing them for original Giacometti’s. The man had clients all over Europe and often sold his pieces out… of the trunk of his car. Apparently, police and art investigators are still baffled at how he managed to go undetected for such a long time.

This is, very likely, the best known forgery involving an Italian artists, ever.

Amedeo Modigliani is an iconic Italian painter and sculptor, famous for his art, but also for his tragic life. In 1984 Livorno, Modigliani’s home town, decides to dedicate to his illustrious son an exhibition in occasion of the centenary of his birth.

In spite of all the effort, the exhibition, which focused on Modigliani’s work as a sculptor, seems set to be a failure: only 4 of the 26 recognized sculptures by Modigliani are on exhibit and people just appear not to be that interested. The Durbé brothers realize they need to do something truly sensational to save their work and attract visitors to the exhibition: accepting for real an old urban legend telling Modigliani had once thrown three scuptures into one of Livorno’s canals because unhappy with them, they decide to look for them. The search is announced grandly to the whole nation and lasts only a bunch of days before three sculptures appear from the waters. The media go crazy and all major art critics agree the three sculpted heads are most definitely a work of Modigliani’s. Without delay, they become the central piece of Durbé’s exhibition. Her joy only lasts about a month, as it takes that long to three university students to reach the offices of popular Italian magazine Panorama and confess they had created one of the head themselves with an automatic drill and threw it in the river. Just like that. Just for fun.

If that was not enough to drag the world of Italian art criticism into the mud the Modigliani heads came from, soon another person claimed to have made the other two pieces. He, neither, lied. None of the newly discovered sculptures was, in fact, an original, in spite of the fact some of the most prominent art critics had no doubts about their authenticity.

To prove they really were the minds – and hands – behind the fakes, the three students created a forth head live on tv, during a popular Sunday show on Rai 1, Domenica In.

They faked it well, indeed.

Stories of forgeries, stories of clumsiness and stories of cunning anti-heroes. If not their penchant for illegal trafficking, one has to appreciate how inventive some of these people are. And Michelangelo… Really?! A forger?! I wish a had one of his fakes…