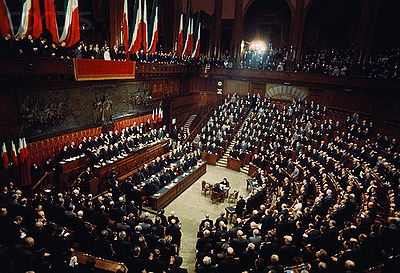 Italy has a very different government structure from the United States. The biggest difference is in the role of the President, who in Italy is merely a public figure with little powers. He ensures  laws follow the constitution, he appoints the Prime Minister, and he has the capacity to teminate the Congress if he feels there is not enough political cohesion to form a new government.

Italy is a Parliamentary Republic, where power is divided in three – such division is similar to that of the U.S. though the function of each political organ is a bit different. The three powers are the Executive, the Legislative, and the Juridical.

The Executive power is in the hands of the Counsel of the Ministers, presided over by the President of the Counsel (the Prime Minister, although this term is not constitutionally correct). The Legislative Power is executed by the Parliament (Congress), which is divided in Senate and Chamber (the House). The two wings of the Parliament are basically identical, and perform virtually the same functions. While the Senate is smaller in size and technically a little older in age, it is nonetheless very similar to the Chamber (House). It is common for laws to be sent back and forth between the Senate and the Chamber, often creating a lag in time. Changes are being carried forward in 2016 to simplify the mode of operation of the Parliament and reduce the number of Senators. The Judiciary Power is handled by the Magistrates (Judges), whose only duty is to implement the laws. Judges are not voted in, but are selected through public selection, based on exams and internal commissions.

Italians cannot vote neither the President nor the Prime Minister, they can only vote to elect the Parliament (Congress). As of the day this article was written, each party is entitled to a closed list where senators and the parties appoint congressional candidates, and therefore citizens cannot choose anything other than the party. This law was implemented in recent years and is quite controversial, criticized even by the politician who originally proposed it. Once the parties receive their votes and the Parliament is elected, the President of the Republic, who is elected by the Parliament itself every seven years, consults delegations from each party and, according to the majority of the consensus, appoints the President of the Counsel (Prime Minister). The Prime Minister then selects his Ministers (Secretaries) and they all go for a “Vote of Trust” in front of the Senate and the Chamber. Legislation is supposed to last five years, but the government can be changed and overthrown at any time by the Parliament, whose sovereignity is above any other institution. By definition the government is not elected but nominated; therefore anyone can be the Prime Minister even if he or she comes from outside the Congress, and without receiving a single vote from the citizens.

The Presidents of the Senate and Chamber (the Speakers) are also nominated by the Parliament.

At a local level, Italy is divided into 20 regions (not states), five of which have special powers: Sicily, Sardinia, Valle d’Aosta, Trentino Alto Adige and Friuli Venezia Giulia. These regions, defined Regioni a Statuto Speciale, have more legislative and fiscal freedom than the others.

Many regions are pushing to transform Italy into a federation, but the road is still very long even though, at least when it comes to fiscal regulations, the country is clearly moving in that direction.

Regions are further divided into provinces, which group together a city and several town and villages. Cities, villages and towns have all mayors and local councils, which are all elected directly by citizens.

The capital of Italy is Rome, which very recently was granted a special status, which allows more money to be directly used for the wellness of the capital.

In the past decade or so, many political forces have tried to change the system, cutting out some of the parties and reducing the number of congressmen, in the effort to smooth out gubernatorial procedures and make the government more efficient. So far, however, no major reforms have been passed and the overall structure has been the same since the end of World War Two. The future will tell us what form the government will take, as the country heads into the second decade of the 21st century.