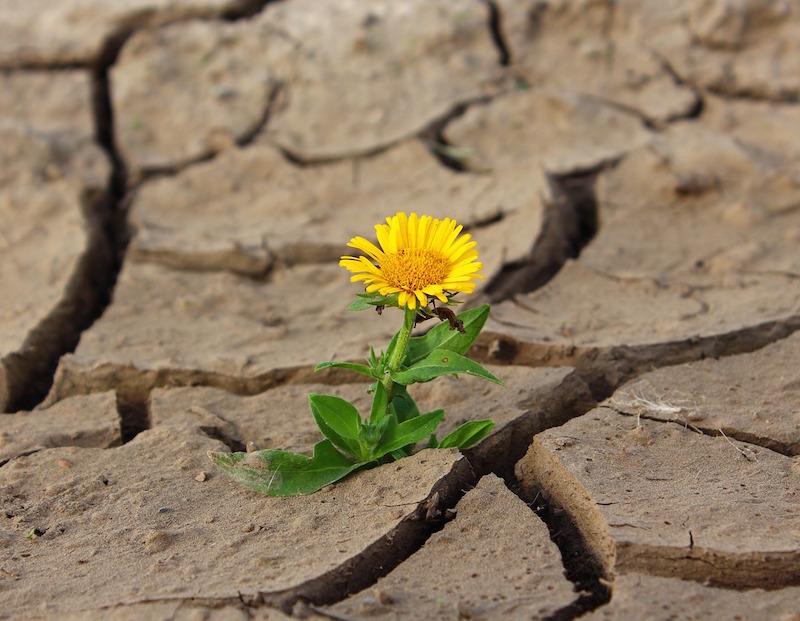 Find yourself stuck in an elevator with a stranger? Perfect. Sitting at the dinner table and conversation has been running slow? Go ahead, mention the weather. Stopped in the middle of the street by an acquaintance? Sure, mention the barely sustainable heat you have to endure every morning on your way to work and those two minutes of necessary awkwardness will be filled.

In the past bunch of years, however, talking about the weather has definitely acquired a more serious connotation: we all very much know climate change is no laughing matter. We all very much, even if to a different extent depending on where in the world we live, have been experiencing its unsettling results: floods have become more common, droughts last for longer. Summers are hotter and winters lost their chilly edge.

Italy, immersed as it is in the warm, maternal waters of the Mediterranean, has become definitely warmer: I personally find summers the same as when I was a child, but winters… winters are a different story. My beloved childhood memories of Langhe‘s snowy mornings  from the end of October well into February have been replaced by much shorter winters, that barely manage to cover the skiing season.

It shouldn’t come as surprise: in the last 100 years, the world’s atmosphere and its oceans have become warmer whereas snow and perennial ice have melted, causing a sensible rise of the sea levels. Speaking about sea levels: we Italians have a little obsession with them, as you may imagine, a bit like that of Californians with the Big One: our country is a peninsula and the more the sea rises, the smaller we become. Fantasy maps showing what Italy may look like in a few centuries leave  us speechless: the Pianura Padana could disappear, the Adriatic sea reaching Milan and parts of Piedmont. Even Rome could be potentially at risk. Can you imagine Italy without Bologna, Rome and the whole Riviera Romagnola? This is the stuff of nightmares, if you ask me.

And this is without mentioning the risk of desertification of the country which, we’re told by scientists, is real. With rains turning from regular and manageable to rare and destructive, Italy’s need for water, a problem already in many areas of the Centre and the South, could  turn into a national emergency within a matter of years.

Fortunately, we’re still on time to change things around, experts say, but what would happen to Italy – and to us – if we didn’t? 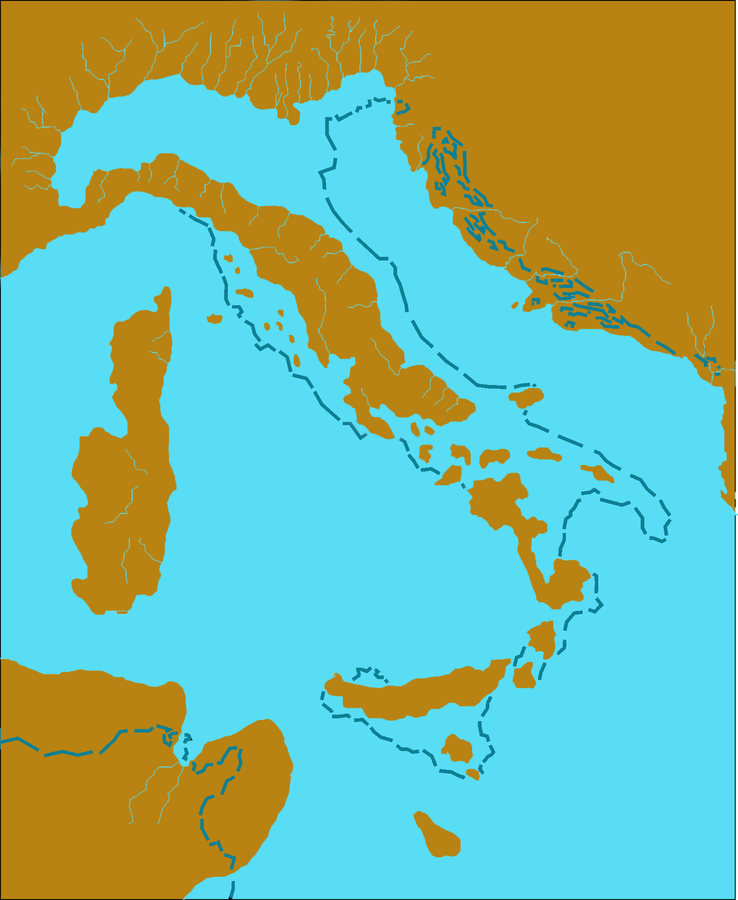 Data show that, since he the 18th century, the sea has risen of about 15 cm (6 inches) and that most of the change has taken place since the mid-20th century. A 2013 report compiled by the Intergovernmental Panel on Climate Change (IPCC) suggests that even if we managed to reduce drastically gas emissions, we may still have to deal with a sea level increase of 0.5 meters. If nothing was done, the report continues, we may be facing and increase of 1 meter within the next 80 to 100 years. Of course, they’re all hypothesis: never before in the history of the world Mankind witnessed the seas rising at such an incredible speed.

Nevertheless, it’s undeniable that climate change, with all its geophysical consequences, risks modifying the look – and habits – of Italy. Let’s go back to the sea rising waters: 70% of Italians live on coastal areas, large sections of which have been built insensibly since the 1960s. Italy’s luxurious coasts are not only home to most of its population, but also a motor of its economy; they are the heart of our country. However, Italians have been ignoring the dangers brought to their homes and businesses by climate change, or so writes Fabrizio Antonioli, research director of the Laboratorio Modellistica Climatica e Impatti dell’Enea.

In his own report, also published by National Geographic Italia, Antonioli explains what it may happen to Italy’s coasts within the next 100 years. Four areas, he begins, are more at risk: the North Adriatic coast, the Taranto Gulf, the Oristano Gulf and the Cagliari Gulf. Here, it has been calculated, dramatic changes could take place. The worst case scenario sees an increase of the sea level of 101 cm in the North Adriatic area, of 96 cm in the Cagliari Gulf, of 95 cm in the Oristano Gulf and of 92 cm in the Taranto Gulf.

Severe droughts have been hitting the country for a few summers now, creating serious situations of emergency in several areas. It’s evident this is, just as the excessive rising of water levels, the result of the negative effects of climate change; according to the WWF, the World Wildlife Organization, one fifth, 21%,  of Italy’s territory is at risk of desertification. 41% of it is in the regions of Molise, Campania, Basilicata, Puglia, Sardegna and Sicilia, all in the South. However, northern and central areas like Emilia-Romagna, Marche, Umbria and Abruzzo are also at serious risk.

Rising temperatures, we’ve seen, cause perennial ice and snow melting, phenomenon behind the augmenting levels of the seas. Hotter weather, however, is also the cause of the increasingly arid weather Italy has been experiencing in the last few years: according to the CMCC (the Euro-Mediterranean Center for Climatic Change) we could be living in a country 3 to 6 degree Celsius hotter than it is today by the end of the 21st century, with consequent dramatic changes in water precipitation, especially during the summer.

In a country already overusing its water resources, less rain and the consequent desertification of the territory could truly represent a tragedy for the well being of its inhabitants and, of course, for its economy.

Of course, if this had to happen, it would cause dramatic changes to the way Italy looks like today. In Veneto, in the area just south of Venice, the coastline would retrocede of 30 km, the equivalent of the distance between New York City and Yonkers. Speaking of La Serenissima, the future could be somber for her. The area is not only in danger of being submerged by the sea, but is also rather unstable geologically, which means there may be the risk of, quite literally, the earth sinking of a few millimeters every year, virtually doubling the effects of the rising of waters. Moreover, not many may be aware of the fact that, a bit like the Netherlands, large section of Venice and its surrounding are already “below sea level, ” because built upon reclaimed lands. The only reason we don’t notice is the impressive system of water drainage implemented, able to suck away more than two million liters of water every second.

If nothing is done to reduce sea level rising or to protect our coasts from it, cities like Aquileia Adria, Ravenna and Rovigo could be fully flooded and Italy’s north-eastern coastline could get as close as ten km to Ferrara.

The region more at risk, however, seems to be Sardinia, where large sections of the coast around the Oristano Gulf could be in danger of disappearing.

When it comes to desertification, changes are already visible in rivers and lakes, whose water levels, contrarily to those of the sea, have been diminishing. This is because they depend heavily on rainfall to maintain their perfect equilibrium, an equilibrium they’ve been lacking in the past few years. Fewer precipitations have also caused water rationing in many areas of the country: Sardinia, for instance, has seen large areas such as Gallura resorting to water rationing among towns and municipalities in order to allow all, from farmers to residents of sea side towns, the use of water. 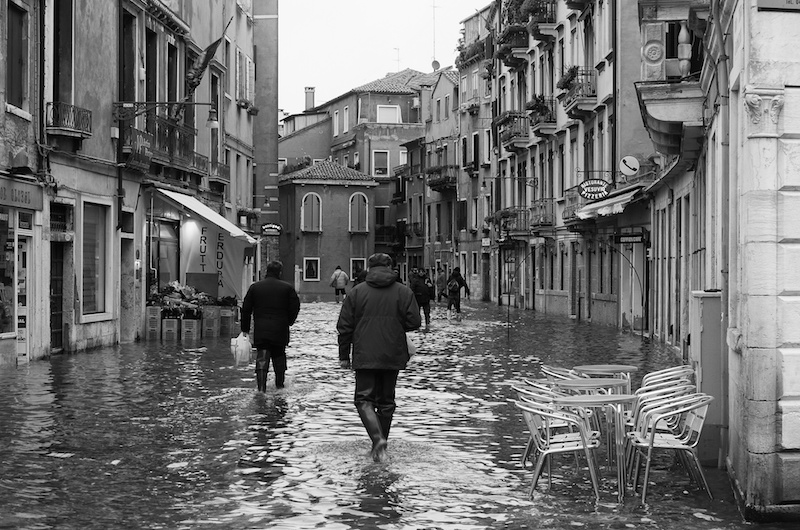 Truth is that, when it comes to climate change and desertification, there really doesn’t seem to be a “best case scenario.” What we’ve described so far would happen in Italy if the sea level rose of about a meter in the next 80 to 100 years. But what would happen if dangerous emissions diminished sensibly, as it is hoped by a large part of the world’s experts and leaders? What would happen if the current climate change patterns could be slowed down? Well, sea levels would still rise. And quite a lot, between 28 and 60 cm. This is because the state of things is, at least in part, irreversible.

Climate change may not make us say goodbye to Venice quite yet, and Milan is not close to get the sea on its doorstep, yet the consequences in Italy of our relentless activity against the environment may soon take unexpected forms. As if the changing face of our seasons, with all the detrimental consequences it’s been having on agriculture, wasn’t enough to convince us all that it’s high time we step it up.