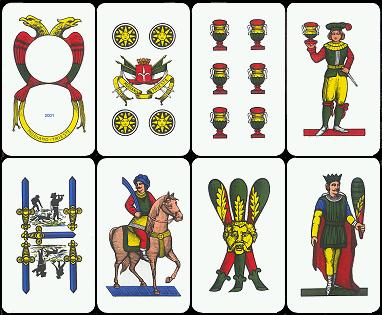 Scopa (“to sweep” in Italian) is one of the most popular card games in Italy.

Nearly everyone in Italy has played it at least once in their life, and in small towns it is still common to see people gathered around a table where four elderly are exchanging swear words and bantering over a heated game of Scopa.

The game of Scopa may be easy to learn, but it is difficult to master. Traditionally it is played with a deck of Neapolitan cards. There are for suits: Coppe (Cups), Ori or Denari (Golds or Coins), Spade (Swords) and Bastoni (Clubs), with face cards ranging from one (the ace) to seven and three figures cards: Knave (Fante in Italian, worth a value of 8), Knight (Cavallo in Italian, worth 9), and King (Re in Italian, worth 10).

The rules are quite simple. Scopa is played with two to four players, or two teams of two players each. At the beginning of the game a player is chosen as dealer. The dealer deals three cards to each player, starting on the right and going counterclockwise. After every player has got his cards, the dealer puts four cards face up on the table. The first player that received cards is the first to start playing. During their turn, a player can place a card face up on the table, or take a trick. A trick is taken by matching the value of a card in the hand to a card of the same value, or two or more cards with same total value, on the table. Captured cards are placed aside and will be counted to calculate points at the end of the round. If a player takes the last card or cards on the table, he has swept, “fatto scopa” and gets an extra point.

When all the players are out of cards, the dealers deals three more cards to each player and the round goes on until all the cards in the deck have been played. When the dealer plays the last card of the final round, the last player that got a trick is awarded all the cards remaining on the table and points are calculated. If a player or team reached 11 points, or is winning 7 to 0 (a “cappotto“) the game ends, otherwise the player on the right of the dealer becomes the new dealer and another round starts.

There are many variants to the traditional game of scopa. One of the most popular is the “Asso piglia tutto” (ace takes it all). The player that plays an ace can take all the cards on the table. This can count as a sweep or not, according to the variant in use.