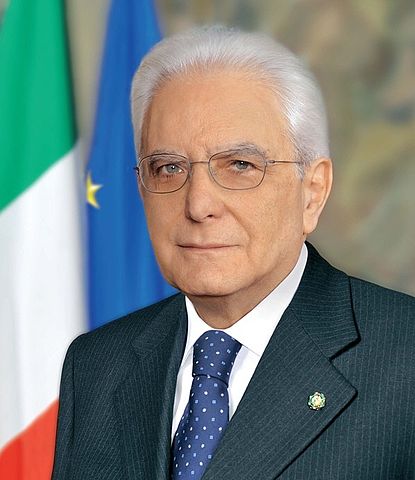 2015 is about to end and Italy has been summing up its achievements and losses. It hasn’t been an easy year for the world and neither has it been for the Bel Paese. In spite of an economical crisis that fails to end, an army of scoundrels leading the country and an increasingly frightful terrorist scare, Italy and its people go on, trying to begin 2016 with a smile on their face.

Here’s a sum up of what made the front page in Italy in the past 12 months, category by category.

The year of Italian politics starts with the election of the country’s new President. On the 31st of January Sergio Mattarella became the 12th president of the Repubblica Italiana. Mattarella, a jurist by education and training, was elected with the 65.9% of votes. An Independent (which means he’s not sided neither with the parties of the centre-left, nor with those of the centre-right), Mattarella is a known figure of the Italian political and social world. Member  – and for a time also vice-secretary – of Italy’s historical Democrazia Cristiana party, Mattarella’s political career started in the 1980s and touched many milestones, including the ministry for Parliamentary relations, the vice-presidency of the government, the ministry of defence. For the four years previous to his election to the Campidoglio, Mattarella was a constitutional judge. Born in Palermo, his brother Piersanti was killed by the Mafia in 1980.

Mattarella’s election was positively accepted by a large majority of the country, who considers him a man of integrity. His first year in charge defined him as a level headed president; we’ll see how the rest of his mandate goes.

On other political news, well… the country’s tired of Matteo Renzi. Italy’s prime minister has been talking hot air to the country for the past 12 months, promising economical improvements, social and fiscal reforms that failed to take place so far. What will be of Renzi in 2016?

2015 has certainly been the year of the Mafia Capitale scandal. We dedicated an article to the issue recently, so you can check it out for more information about it by clicking on the link. Rome was also at the centre of yet another despicable albeit certainly curious event: the funerals of Vittorio Casamonica, head of the homonymous Casamonica’s clan. The Casamonicas are a sinti (gipsies of eastern european origin) Italian family originary of Abruzzo; since the 1970s, they’ve been dominating the world of roman criminality, often in alliance with other known organizations like the Banda della Magliana. On the 20th of August, in occasion of Vittorio’s funeral, his relatives put up the tackiest of shows: horse drawn carriage for the casket, a brass band playing The Godfather’s musical theme, enormous posters hanging in the streets and even a cascade of rose petals thrown from an helicopter flying above Rome.

The funeral-show created a huge amount of concern, not only because of the highly apologetic approach to criminality shown by its organizers and participants – celebrating priest included – but also because of the potential risks brought to security. The helicopter flew without being detected and without any permission, creating a huge amount of security issues. The Casamonicas hold the drug monopoly in the capital and its surroundings and are known as one of Italy’s most powerful criminal families.

Mysteries have found a solution in 2015, too: crime journalists closely followed the trials of Michele Boninconti, Massimo Bossetti and Alberto Stasi this year, along with new cases such as those of Eligia Ardita and Marco Vannini. Boninconti was found guilty of murdering his wife, Elena Ceste, in January 2014. Her body was found only several months later. Eventually the police decided to arrest her husband for the murder. In spite of being charged, evidence against Boniconti was only circumstantial and many wonder if he really did commit the crime.

Another famous case that found its conclusion this year is that of the murder of Chiara Poggi. Butchered in her own home in 2007, almost immediately Poggi’s boyfriend Alberto Stasi was accused of her killing. Eight years and five trials later, Stasi was found guilty only a handful of weeks ago and condemned to 16 years in jail. Also the death of Yara Gambirasio remained on Italy’s front pages for the whole year. The trial of his possible killer, Massimo Bossetti started during the Summer and is still ongoing.

Other cases that kept Italians on the edge of their armachairs are those of Eligia Ardita, a young, eight months pregnant nurse killed by her husband, and Marco Vannini, a 20 year old young man shot to death by mistake, it seems, by his girlfriend’s father. Vannini’s girlfriend, her father, mother, brother and sister in law are all investigated in the case.

2015 has been the year of immigration and terrorism. Italy has found itself at the epicentre of the massive flux of middle eastern and northern african immigrants trying to find safety in Europe. Numbers are unequalled, in what appears to be the largest migration phenomenon hitting the country in its history. Lack of organization and, especially, help and support from the rest of the EU, has  left Italy alone in dealing with such emergency for many months. Somehow associated with it is also the issue of terrorism, as most of these unfortunate hails from Syria and Iraq, countries held violently by Daesh forces. The same organization stands behind the gruesome attacks on Paris in January and November, attacks that led to heightened anti-terror mesures all over the world, Italy included. Anti terrorism forces are particularly active in our larger cities and especially in Rome, in name of the profound relevance of the city for Christianity.

It hasn’t been an easy year for the Catholic Church, hit once again by a series of scandals. From bishops and cardinals using faithfuls’ money and charity funds to pay for holidays and penthouses in Rome, to precious information leaked to journalists by close papal collaborators, the Holy See had to deal with plenty of problems. The figure of Pope Francis, however, seems to stand almost unscathed by it all, as people seem to like him like the first day. A winning initiative has certainly been the proclamation of a jubilar year that started this December and will conclude in November 2016. Dedicated to mercy, it is set to bring numerous visitors to Rome and Italy this coming year.

Sports: Italian women leaders in the US Open 2015

It had been too long, since an Italian showed its stuff on a tennis court. This year the dream came true thanks to Flavia Pennetta and her real life friend Roberta Vinci, who faced each other in the US Open finals at Flushing Meadows. Pennetta defeated Simona Halep in the semifinals; Vinci achieved the impossible beating unbeatable Serena Williams. It was a huge success for Italian sports, even though its taste was bittersweet as Pennetta confirmed her intentions to retire from professional tennis at the end of the year.

Of course, we’ll all remember 2015 as the year of the Expo di Milano. The event was visited by 21 millions people in 184 days, including plenty of testimonials and VIPs like Bono, Sharon Stone, Angela Merkel and Michelle Obama.

And what can we say about Italy’s scorching hot Summer? With peaks of 40 degrees Celsius, the Summer of 2015 has been hell for many. If tourism enjoyed a welcome high after the terrible season of 2014 (one of the coolest Summers of the past 20 years), the excessive heat was an unwanted nuisance for the majority of us. Leaving the house only after 6 pm and survive with the A/C on for the best part of three months is an experience the majority of Italians truly don’t want to repeat this year.

We said goodbye to…